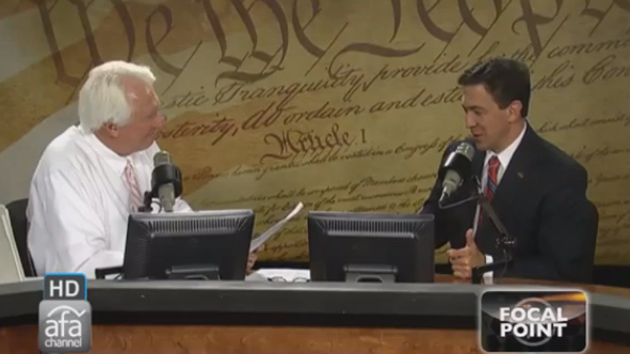 Mississippi GOP Senate candidate Chris McDaniel appeared on a radio program on Monday hosted by a controversial social conservative activist who has called for gay people to be imprisoned and has said the “the spirit of the Antichrist is at work” in the Obama White House.

McDaniel, a state senator who is challenging incumbent Sen. Thad Cochran for the GOP nomination, has taken heat over the last week for past comments he made on his own radio show, “The Right Side,” which were reported by Mother Jones in January. The comments, recently picked up by the Wall Street Journal, featured a riff on the merits of using taxpayer funds to pay reparations to the descendants of slaves. “If they pass reparations, and my taxes are going up, I ain’t paying taxes,” the tea party favorite said in 2006. His appearance Monday on “Focal Point” with host Bryan Fischer, the issues director for the American Family Association, was an opportunity to clear the record.

“They’re desperate,” McDaniel told Fischer. “And when these politicians and the establishment in Washington feels threatened, they always react with desperation. I was a conservative talk radio [host], actually it was a Christian conservative talk radio show for three and a half four years I hosted that. Two hours a day. And this is the best they’ve got? Most of it is way out of context anyway. They were talking about reparations, for example—let me be real clear, I’m against reparations. I don’t know why that’s a bad thing to say. Maybe Sen. Cochran’s for reparations? He should clarify that for us. But I’m against it. And some of the other things, we were just sitting there, no harm was meant.”

In other clips from “The Right Side,” McDaniel alleged that Democrats were plotting to make polygamy legal in all 50 states, and that Hollywood was whitewashing the evils of Islam. He mocked San Francisco “elites” by alleging a correlation between IQ and “gender misidentification,” and blamed an uptick of gun violence in Canada on hip-hop. Shootings, McDaniels claimed, are “a problem of a culture that values prison more than college; a culture that values rap and destruction of community values more than it does poetry; a culture that can’t stand education.”

But Fischer’s show is an unusual choice for a politician looking to launder his reputation as a conservative shock-jock. In March, Fischer told his listeners that while he didn’t think President Obama is the antichrist, “the spirit of the Antichrist is at work” in the Oval Office. He has said that people turn to homosexuality (which he’d like criminalized) when the Devil takes over their brains. He once called for a Sea World Orca whale to be Biblically stoned after it killed its trainer. He said the secretarial job in his office is “reserved for a woman because of the unique things that God has built into women.” Even some Republicans have distanced themselves from Fischer—at the 2011 Values Voters Summit in Washington, D.C., Mitt Romney condemned Fischer’s “poisonous language.”

McDaniel has received the backing of major Republican groups, including the Senate Conservatives Fund and Club for Growth, but still faces an uphill battle. An April survey from Harper Polling gave Cochran a double-digit edge over McDaniel, 52–35.