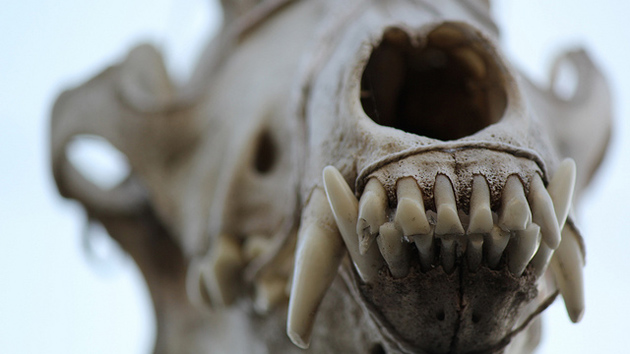 Arlen “Bubba” Parma of Ratcliffe, Texas, was minding his property last weekend when he came upon something he’d never seen before. Four-legged. Hairless. Making an otherworldly noise. Naturally, he brought it home to his wife.

“I said, ‘Bubba, that looks like a baby chupacabra,'” his wife, Jackie Stock, told the local ABC affiliate.

Jackie and Bubba believed they’d stumbled upon a Latin American vampire beast that guzzles the blood of livestock. They decided to take it as a pet. The myth of the chupacabra, the ABC station reported, “has been around for decades.”

On further examination, there are a lot of Bubba Parmas out there. Although the wildlife experts who invariably weigh in on alleged chupacabra sightings say there is a simple explanation—a skin disease called mange that cause quadrupeds’ skin to fall off—dozens of local news outlets have reported sightings over the past three years. But this rash of reporting on chupacabras isn’t just entertaining journalism—it’s also bad journalism. With just a handful of exceptions, none of these news outlets ever tell it straight: The legend of the chupacabra is barely old enough to buy cigarettes. It’s not mysterious. It’s not a legend. It’s not “decades old”—not even two.

I’m familiar with this problem because, like many Americans, I receive a daily Google News alert for the word “chupacabra.” It’s a wonder I ever leave the house. If there’s a four-legged creature afflicted with a skin condition, chances are an Area Man and a local news crew won’t be far behind. In Falfurrias, Texas, a taxidermist nearly broke down in tears when he came upon a still-fresh corpse. In Picayune, Mississippi, residents hid in their cars from a creature whose true identity they discovered after Googling “hairless coyote.” A 13-year-old in Inez, Texas, dropped a suspected chupacabra with a .257 Weatherby rifle after spotting it outside his bedroom window.

The beast can apparently swim. It was spotted in Belarus, and in Ukraine, where residents claimed it killed their rabbits. Russian farmers blamed it for the slaughter of 60 sheep, prompting the government to issue a formal notice that “there are no fairytale creatures in the Lukhovitsky district.” Last year, it was spotted in the savannahs of Namibia, where villagers reported a “dog-headed pig monster” terrorizing the community.

These stories would be terrific if they weren’t so consistently misleading. In local news reports, chupacabra sightings are frequently presented as a handover from previous generations. “Chupacabra sightings have been rumored in North America, Mexico, and Puerto Rico for more than 50 years,” an Arizona CBS affiliate explained to its viewers, after a Tucson meteorologist reported spotting one on the way to work. “The legend of ‘El Chupacabra’ dates back to the 1970s,” reported Biloxi, Mississippi’s WLOX after the sighting in Picayune. KLTV of Tyler, Texas, identified the chupacabra as “a bloodthirsty predator of Mexican lore.” The Associated Press called it “folkloric legend,” after another close call in Deer Creek, Oklahoma.

The real story of the chupacabra is decidedly modern. Although myths of vampire creatures are longstanding, the first known reference and eyewitness account came just 19 years ago, from a Puerto Rican woman named Madelyne Tolentino. Researcher Ben Radford laid out the details in his 2011 book, Tracking the Chupacabra: The Vampire Beast in Fact, Fiction and Folklore. Radford, who deserves a medal or something, tracked down Tolentino and identified the inspiration for her account—she had just seen the movie Species, which came out in 1995 and features an alien almost identical to the animal Tolentino spotted. Radford offered a $250 reward for any earlier reference to the chupacabra and is still waiting.

Every once in a while, a news outlet demonstrates its ability to procure homespun commentary from locals about hairless vampire demons without sacrificing its journalistic cred. Good Morning America, for instance, cited Radford’s work in a story about a retired wildlife biologist in Lake Jackson, Texas, who had whimsically reported a chupacabra sighting to the local press only to find himself the subject of a media frenzy.

But the most common strategy is to teach the controversy. “Some people think it exists, others say it’s just a mangy dog,” reported KENS of San Antonio, referring to a mangy coyote spotted inside the city limits. A Phoenix ABC affiliate offered that an unidentified creature might be a vampire beast or a badger. “What do you think?” the station asked readers.

In the meantime, the flood of sightings seems to be increasing, no doubt buoyed by people who have seen local news clips about previous encounters. “I actually Google Imaged ‘chupacabra’ and it looks just like the other images,” a San Antonio woman said last June, after spotting what local biologists insisted was a coyote with mange. “They said it was one of them chupacabras or whatever,” said Matthew Harrell, the Mississippi man who bagged a creature in a place called Pigtown. “That’s what I’d call it because it looks just like it.” The chupacabra isn’t a Puerto Rican phenomenon anymore; it’s a local TV one.