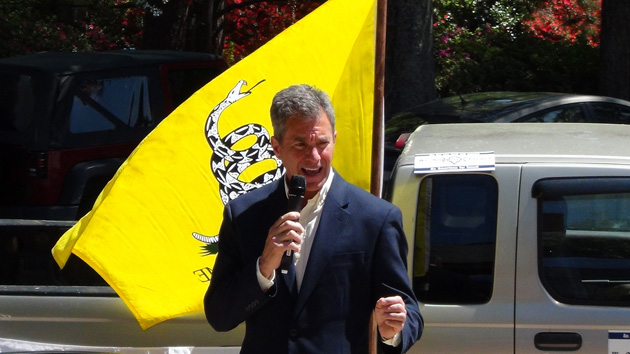 In 2012, Greg Brannon, who is now a North Carolina Republican Senate candidate, wouldn’t say whether he thought the attacks on September 11, 2001, were an inside job—but, he said, “Things like this have to be asked.”

Brannon, an OB-GYN endorsed by Sen. Rand Paul (R-Ky.) and a leading contender in the GOP primary to challenge Sen. Kay Hagan (D-N.C.), made that comment as a guest on a local conservative talk show. At the time, Brannon was running Founder’s Truth, a North Carolina tea party organization. A caller offered up a conspiracy theory about September 11, and as the host, Bill LuMaye, tried to redirect the conversation, Brannon answered:

John, caller: I’m a 9/11 truther. And I had a friend of mine…tell me, look on the internet, Google “the Pentagon” and show me where the plane hit the Pentagon. Where is the plane? There’s all kinds of pictures of that building smoldering, and fire trucks everywhere. There’s no plane. So I did research on the size of planes, of the engines that ran this plane. These things are 12,000 pounds, these engines that would have flown off—that’s six tons—and put a hole in something. There’s nothing there.

Bill LuMaye: Well, without getting into—

John: There’s a hole in the building and there’s no broken glass.

LuMaye: Well, I’d rather not get into a discussion on whether 9/11 was an inside job or not. I really, I mean, we can save that for another day, I have no problem with that, it’s just—

Greg Brannon: These questions, again, actually, that’s what [9/11 commission vice-chair] Lee Hamilton said. And he just said, there’s other questions that need answering. The guy who got all the information…a Democrat and a Republican, were the co-chairmen of the 9/11 commission, and when they got done, they did not put their stamp of approval on the commission. They said, ‘There’s data that we did not put in there.’ So things like this have to be asked.

It’s true that Thomas Kean and Lee Hamilton, the chairman and vice chairman of the 9/11 commission, said that the commission’s investigation of the September 11 plot was incomplete. But their complaint was that government agencies blocked the commission from assessing how badly prepared the United States was for the attacks, and which US agencies were responsible for failing to prevent the attacks—not that the US was hiding its own involvement.

On the same show, Brannon sparred with a different caller who wanted to know why the Founder’s Truth website linked to InfoWars, a conspiracy-theory-charged website that has published articles claiming the US government planned the September 11 attacks. The caller pressed Brannon to say if he agreed with InfoWars‘ theory of September 11. Brannon refused to answer:

Brannon: Well they’ve been on [the web] for 17 years, but they think it is an inside job.

Jim: Right. So, do you—do you think it’s an inside job?

Jim: Well, it was. To the tune of a few thousand pages.

Brannon: [Crosstalk.] No, no, no. Listen, sir. No sir, no sir. Listen to me. Sir, I’m quoting the co-chairman of the 9/11 commission. He stated—I’m not saying Greg Brannon—I’m saying he stated we need much more investigation. That’s what I’m saying.

Brannon: Again, you’re talking about the guy who knows more about it than—

Jim: About what, though? What does he want more investigation on?

LuMaye: Can I just, what the hell is this call all about? [Crosstalk.]

Brannon’s campaign did not respond to requests for comment.

Archived pages of the Founder’s Truth website that BuzzFeed unearthed in January were riven with conspiracy theories—including reports of a government gun grab prompted by the Aurora massacre, and material about Agenda 21, which fringe conservatives believe is a United Nations plot to abolish private property. Brannon did not appear to write any of those articles.

As Mother Jones previously reported, in October, Brannon spoke at a rally cosponsored by the League of the South, a secessionist group seeking “a free and independent Southern republic.” Brannon has also equated food stamps and bipartisan compromise with “slavery.”

Polling in the North Carolina Senate Republican primary consistently shows Brannon trailing Thom Tillis, the speaker of the North Carolina House. But Tillis does not appear to have enough of a lead to avoid a runoff against the second-place finisher—who is likely to be Brannon.