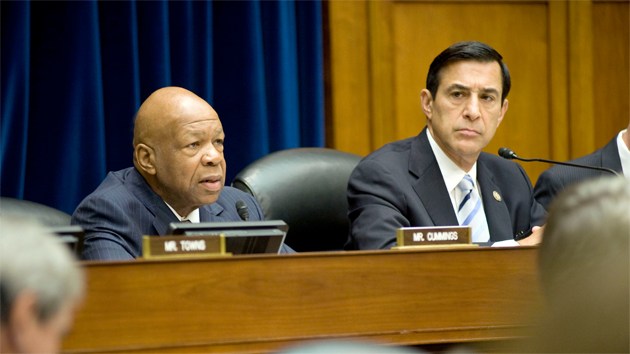 It’s no secret that Reps. Darrell Issa (R-Calif.) and Elijah Cummings (D-Md.) don’t get along. Last month, Issa cut off Cummings’ microphone at a hearing on the IRS scandal. Their latest spat came last week, when Issa, chairman of the House Oversight and Government Reform Committee, sent a letter to Cummings, the senior Democrat on the committee, accusing him of secretly scheming with the IRS to target True the Vote, a conservative organization. But in his argument against Cummings, Issa’s grasping at straws.

The oversight committee has been investigating whether the IRS purposefully targeted conservative nonprofit groups. GOPers have fixated on the investigation, despite the fact that documents have shown the IRS scrutinized progressive groups as well. And last Thursday, House Republicans voted to hold former IRS official Lois Lerner in contempt for refusing to testify about her role in the IRS matter. One of the groups that Issa is concerned may have been unfairly targeted is True the Vote, an organization whose mission is to root out voter fraud. At least as early as February 2012, the IRS was requesting information from True the Vote about its activities, including any for-profit organizations it was associated with. A few months later, in August, Cummings contacted the IRS to notify the agency that his own staff was planning to investigate the organization. On October 4, 2012, his office sent the first of a series of letters to True the Vote requesting information about its activities. Cummings was concerned that the group was engaging in voter intimidation and partisan activities, such as making a $5,000 donation to the Republican State Leadership Committee. Cummings asked the IRS for “publicly available information” about the group in January 2013.

Issa’s main gripe is that Cummings sent questions to True the Vote that were similar to questions the IRS put to the organization. He says that although Cummings denied that his staff “might have been involved in putting True the Vote on the radar screen of some of these federal agencies,” his communications indicate otherwise. Issa also claims that Cummings didn’t adequately inform the committee of his interactions with the IRS.

But according to the timeline in Issa’s own letter, Cummings didn’t trigger the IRS investigation into True the Vote. True the Vote was on the agency’s radar screen months before Cummings reached out to the IRS. Additionally, Issa was aware that Cummings was looking into True the Vote. Cummings CCed Issa on the October 2012 letters he sent to the group and posted them on his website. In a scathing reply to Issa last week, Cummings wrote: “According to your logic, simply requesting access to public information is somehow evidence of a nefarious conspiracy.”

It’s certainly not unusual for lawmakers to request publicly available information from government agencies. In fact, Issa sent a sharply worded letter to the IRS in August 2009 requesting documents related to the Association of Community Organizations for Reform Now (ACORN), the now defunct progressive organization. He specifically wanted to ensure that ACORN’s political contributions “satisfy federal and state campaign finance laws” and was concerned the nonprofit was engaging in partisanship. About a month after Issa sent his letter, ACORN employees were caught on tape advising conservative activists who were posing as a prostitute and a pimp on how to evade the IRS. ACORN then lost funding from a number of federal sources. Issa quickly took credit for these developments.