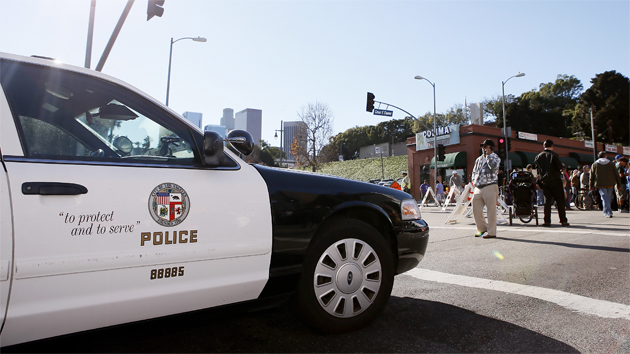 The Los Angeles Police Department attempted to bury a case of sexual assault involving two of its officers, even telling the victim not to seek legal counsel after she came forward, according to a recent lawsuit filed in a California federal court. The suit alleges that the officers were reported for sexual assault by at least three other women between 2009 and 2012, but they remained on the job until 2013.

In September 2009, Tara McMahon, then 20, was arrested on drug charges by LAPD narcotics officers Luis Valenzuela and James Nichols; in the following months, she alleges in a legal complaint that was filed in late March, the two officers continued to contact and harass her. Toward the end of the year, McMahon says she was walking her dog in Hollywood when Valenzuela and Nichols pulled up beside her and ordered her inside their car. Valenzuela then drove to a secluded spot, and forced McMahon to perform oral sex on him in the back of the car while Nichols sat in the front seat, the complaint alleges. “If you don’t suck my dick, you’re going to jail,” Valenzuela told McMahon, according to a search warrant filed by an investigator involved in an ongoing LA County criminal investigation of the men. The officers threatened McMahon with jail if she told anyone about the incident, according to the complaint. McMahon alleges that the officers also tried to buy her a ticket to Las Vegas, if she promised not to come back to LA.

When McMahon reported the incident to the LAPD in January 2011, the suit alleges that “she was stonewalled and strung along for nearly three years by an LAPD Internal Affairs detective who mixed false promises that the officers would be brought to justice with a repeated command: Don’t talk to a lawyer.” The complaint continues, “[Internal Affairs was] only interested in keeping her quiet and burying the case.”

Fatima Goss Graves, a vice president at the National Women’s Law Center (NWLC), says McMahon’s allegations are “shocking. An allegation of this level about this sort of brutality and assault…is something that should prompt an immediate investigation…Circling wagons and closing in is not the right approach.”

Because the LAPD failed to take disciplinary action against Valenzuela and Nichols immediately after McMahon reported the incident, the two officers were allegedly able to sexually assault at least one other woman, according to the LA County search warrant. Between 2009 and 2012, a total of four women reported they had been sexually assaulted by Valenzuela and/or Nichols, the complaint says. (In January, the city of Los Angeles agreed to pay one of the alleged victims $575,000 to settle her suit against the city.) Finally, in January 2013, the two men were suspended with pay as the department investigated. Nichols’ lawyer, Robert Rico, says his client denies McMahon’s allegations. Valenzuela did not respond to a request for comment.

Valenzuela and Nichols are currently on unpaid suspension as they await the results of a disciplinary hearing. LAPD officials have determined that there is sufficient evidence to fire them, sources told the Los Angeles Times in November, but since the chief of police does not have the authority to fire an officer, a department disciplinary panel will decide their fate. The district attorney’s office says it is reviewing the case to decide whether to file criminal charges against them.

The sexual-assault allegations against the two officers could point to a more systemic problem within the LAPD, according to Goss Graves. “Having knowledge about even one [sexual-assault] case…in a police department should raise real alarm about whether there’s a broader…abuse of authority within the department,” she says, adding that an independent investigator should be brought in to make that determination. The LAPD declined to comment, as did he office of Los Angeles Mayor Eric Garcetti.

In recent months, other police departments around the country have faced sexual-assault allegations. In mid-March, a police officer in Baltimore was charged with raping a woman he was supposed to be helping after a traffic accident. Around the same time, police officers in Detroit and San Jose, California, were both separately charged with raping women who had called 911 during domestic-violence incidents.