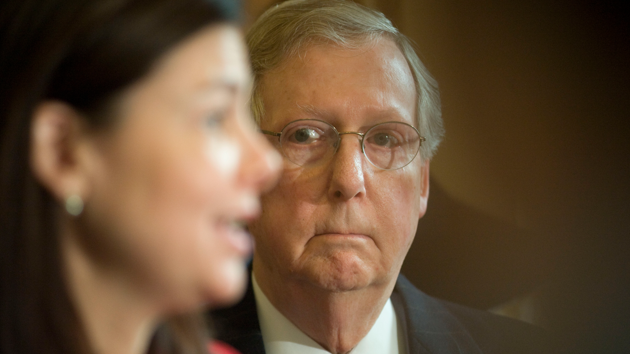 Facing his toughest reelection battle in years against a well-known and well-financed female opponent, Mitch McConnell (R-Ky.) recently boasted that he led the Senate in ousting a GOP colleague accused of sexual harassment in 1995. But news reports from that time show that late in the investigation, McConnell tried to stall the probe against his fellow Republican, Sen. Bob Packwood (R-Ore.). He derided efforts by Sen. Barbara Boxer (D-Calif.) to hold public hearings on Packwood as “frolic and detour”—after the Senate ethics committee had substantiated nearly two-dozen claims of sexual harassment leveled against Packwood by female lobbyists and former staffers.

Talking about the Packwood scandal this past week, McConnell noted that he was chair of the Senate ethics committee when Packwood resigned. In a Tuesday interview with the Lexington Herald-Leader, McConnell said he had taken “the toughest possible position.” The newspaper reported that McConnell had “offered himself as an example of how elected officials should handle situations when a member of their own party is accused of sexual harassment.”

But the bulk of the ethics probe against Packwood took place when the committee was chaired by a Democrat. When Republicans regained a majority in the Senate after the 1994 elections and McConnell became chair of the committee, he transformed the Packwood investigation into a partisan mess.

Here’s the backstory: In late November 1992, the Washington Post reported that at least 10 lobbyists and former Packwood staffers said they had been sexually harassed by Packwood. Several of the women claimed that Packwood had grabbed them or forcibly kissed them until they protested or pushed him away.

The story detonated a Washington scandal. Within a week, Packwood acknowledged the accusations, claiming his conduct was the result of a substance abuse problem. He called for a Senate ethics committee investigation of his own behavior. Bob Dole, then the Republican Senate minority leader, echoed Packwood’s call for an investigation. “The quicker the better,” he said. In subsequent weeks, several more women came forward. A former Packwood campaign volunteer told the Associated Press that Packwood had tasked her with gathering dirt on his accusers, and an official ethics inquiry was under way.

In the next year, Senate ethics committee staff interviewed 150 people across the country. This yielded 4,000 pages of sworn testimony and 1,000 pages of supporting documents. The investigators also collected new accusations from several women who had not spoken to the press.

Throughout this phase of the investigation, McConnell, the senior Republican on the committee, won praise from Democrats who had previously regarded him as the GOP’s junkyard dog. McConnell joined Democrats on the ethics committee in turning down a deal with Packwood to weaken the investigation, and he encouraged dozens of Republicans to vote on the Senate floor to subpoena Packwood’s diaries—audio tapes in which Packwood described his sexual misconduct in lewd detail.

With Republicans now in the majority, McConnell, as chair of the Senate ethics committee, took control of the Packwood inquiry. And the investigation suddenly slowed down. As the committee missed its projected deadline for voting on public hearings by several months, McConnell dodged questions about where the investigation stood.

In mid-May, the committee announced it had acquired sufficient evidence to hold public hearings on the allegations. Its investigation had substantiated “18 instances of kissing, grabbing, groping or propositioning women,” often by force, the New York Times reported.

It was unprecedented for such serious ethics charges not to result in public hearings. But McConnell battled to keep the ensuing proceedings against Packwood closed. With Democrats demanding public hearings, McConnell canceled an ethics committee vote on holding such hearings without explanation. In the following weeks, he allowed committee debates over whether to hold public proceedings to drag on without a vote.

In July, fed-up Senate Democrats pushed for a vote before the full Senate on holding hearings. McConnell responded with a threat, according to the Washington Post:

Senate sources said McConnell told [Sen. Barbara] Boxer on Tuesday that he would hold [ethics] hearings on two prominent Democrats if Boxer persisted in plans to force the issue of public hearings on Packwood.

According to the sources, McConnell approached committee member Barbarba Mikulski, D-Md., and told her, “You go find Barbara Boxer and tell her if she brings this amendment to the Senate floor, I’ll be having hearings on Daschle and Chappaquiddick.”

This was a reference to the 1969 incident involving the drowning of a woman companion of Sen. Edward Kennedy, D-Mass., and to allegations earlier this year that Senate Minority Leader Thomas Daschle, D-S.D., may have intervened improperly on behalf of South Dakota air charter company.

The sources said Boxer confronted McConnell later and asked him if he was threatening her.

He responded, “I’m not threatening you; I’m promising you,” a source said.

The Associated Press recounted it this way:

The next day, July 21, McConnell hinted on the Senate floor that he would kick off retaliatory investigations. “If Sen. Boxer takes us on another such frolic and detour, it will only further distract us and prevent us from concluding this important case,” he said. “So if we find ourselves on the floor in the coming days debating legislation regarding hearings in the Packwood case or any other subject related to ethics committee procedures, I will be prepared, and I am sure others will be prepared, to discuss and debate congressional action on misconduct cases in the past and other relevant issues.”

But early the following month, Boxer forced a Senate vote on her proposal to hold public hearings on Packwood. Republicans, at McConnell’s urging, filibustered, and a vote to break the filibuster failed.

The Senate ethics committee finally concluded the Packwood case the next month, on September 6, when senators returned from their summer recess. In a unanimous vote, the six members of the ethics committee, including McConnell, recommended that the Senate expel Packwood. By then, two more women had approached the committee claiming Packwood had harassed them. One of them said this had occurred when she was 17 years old. Packwood resigned a day after the committee vote. The full investigation had taken nearly three years. No public hearings were ever held.

In response, the campaign for McConnell’s Democratic opponent, Alison Lundergan Grimes, circulated a New York Times editorial from 1995 that decried McConnell’s “bullying tactics” during the Packwood scandal. “It is improper for Mr. McConnell to hold the Packwood matter hostage to unrelated issues,” the editorial said, referencing McConnell’s Chappaquiddick threats. “That is an abuse of his power as chairman.”

“McConnell now must resort to rewriting history to save the only job he cares about: his own,” a Grimes spokeswoman wrote in an email.

“One fundamental problem Alison Lundergan Grimes has with reality here in Kentucky is that she actually believes the New York Times editorial page is the arbiter of truth and fact,” Allison Moore, a spokeswoman for the McConnell campaign, wrote in an email. “The internet would be a good resource for her to find out how Senator McConnell led the fight to expose and expel a senior member of his own party for egregious sexual harassment of women in the Senate.” Moore added that Sen. Harry Reid (D-Nev.) praised McConnell’s actions shortly after Packwood resigned.

This is not the first time McConnell has highlighted the Packwood scandal during a campaign. In his 1996 reelection effort, he ran an ad during the summer Olympics boasting that he “took the lead” in ousting Packwood. McConnell, the ad said, had displayed “courage and independence—rare qualities in Washington these days.”