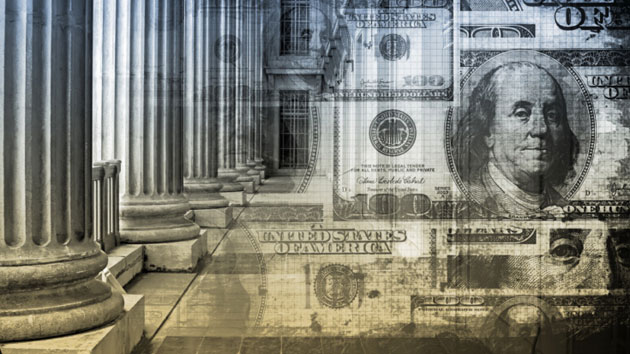 The Supreme Court on Wednesday released its decision in McCutcheon v. Federal Election Commission, the blockbuster money-in-politics case of the current term. The court’s five conservative justices all agreed that the so-called aggregate limit on the amount of money a donor can give to candidates, political action committees, and political parties is unconstitutional. In a separate opinion, conservative justice Clarence Thomas went even further, calling on the court to overrule Buckley v. Valeo, the 1976 decision that concluded it was constitutional to limit contributions to candidates.

In their dissent, the court’s four liberal justices called their colleagues’ logic “faulty” and said it “misconstrues the nature of the competing constitutional interests at stake.” The dissent continues, “Taken together with Citizens United v. Federal Election Commission, today’s decision eviscerates our Nation’s campaign finance laws, leaving a remnant incapable of dealing with the grave problems of democratic legitimacy that those laws were intended to resolve.”

The decision is a boon for wealthy donors, a potential lifeline for the weakened Democratic and Republican parties, and the latest in a series of setbacks dealt by the Roberts court to supporters of tougher campaign laws. Here’s what you need to know.

How’d this happen? In the 2012 election cycle, a wealthy Alabama businessman named Shaun McCutcheon tried to make donations in the amount of $1,776 to 27 right-leaning congressional candidates. Not so fast, replied the Federal Election Commission (FEC), the nation’s campaign finance watchdog.

Not only does the FEC cap the amount of money a donor can give to, say, Joe Schmo for Congress ($2,600 per election in 2013-14) or the Democratic National Committee ($32,400*), the FEC also puts a ceiling on the number of within-the-limit donations a donor can make in a single election cycle. In the 2012 cycle, the aggregate limit for a donor like McCutcheon was $117,000 in donations to campaigns, PACs, and party committees. (To be clear, the PACs in this instance are of the traditional variety, the ones that have been around since the 1940s, not the super-PACs ushered in after the 2010 Citizens United decision.)

McCutcheon didn’t like the FEC telling him he could give $1,776 to 26 congressional candidates but not 27. (That would’ve exceeded the aggregate limit for candidate donations, which at that time was $46,200.) So he sued the FEC, and the Republican National Committee later joined his case as a coplaintiff.

After this decision, how much can Shaun McCutcheon give? Hypothetically, a single donor can now contribute as much as $3.5 million, to be divvied up between candidates, PACs, and political parties. No single entity could receive any more than the legal limits, and when you add up all the contributions a donor could potentially make without the aggregate limits, you get $3.5 million. (The overall aggregate limit was raised to $123,200 for the 2014 cycle.)

Who benefits from the decision? This one’s easy: Politically motivated rich people, the types who can afford to cut six- or seven-figure checks.

We have a pretty good idea who these people are. An analysis by the Sunlight Foundation identified 20 donors of so-called hard money (campaign donations made within federal limits) who might be “most likely to exceed” if the Supreme Court ruled in favor of McCutcheon. They include Stephen Bechtel, the retired chairman and co-owner of the contracting firm Bechtel Corporation; investor Charles Schwab; leveraged-buyout billionaire John W. Childs; and Ellen Susman, a Texas-based donor and fundraiser backing President Obama.

The people who stand to benefit from McCutcheon are also the wealthy few who bankroll super-PACs on both sides of the aisle. According to the left-leaning think tank Demos, almost 60 percent of all super-PAC funding in the last election cycle came from 159 donors—that’s two coach buses of people—who’d given $1 million or more. The casino magnate Sheldon Adelson alone reportedly gave $150 million in the 2012 election cycle. This Million-Dollar Donors Club rules the world of super-PACs, and critics of the McCutcheon ruling fear they’ll now rule the world of candidates, PACs, and political parties, too.

What’s more, the parties and Congress itself could benefit from the ruling. Since the 2010 Citizens United decision, super-PACs and political nonprofits (and the consultants who run them) have gorged on million-dollar donations because they can raise and spend unlimited cash. Political parties cannot rake in the cash so freely, and they’ve struggled as a result. University of California-Irvine law professor Rick Hasen, who did not support McCutcheon’s cause, nonetheless has argued that the decision could reinvigorate the parties and maybe scale back the gridlock crippling Congress.

What are the reactions to the McCutcheon decision? Campaign finance reformers fear the ruling will lead to more political corruption and more dependence—within Congress and on the campaign trail—on the very wealthiest Americans. They also worry that this is another bad precedent that could lead to the erosion of what’s left of the nation’s campaign finance laws. “The Supreme Court majority voted in McCutcheon today to license the further corruption of our democracy,” says Fred Wertheimer, president of the pro-regulation group Democracy 21. “The Court re-created the system of legalized bribery today that existed during the Watergate days.”

Those who supported Shaun McCutcheon hailed the decision as a step in the right direction. Reince Priebus, the chair of the Republican National Committee, tweeted, “Today’s McCutcheon decision from the Court is important 1st step toward restoring the voice of candidates and party committees.” And Dan Backer, a conservative attorney who first persuaded Shaun McCutcheon to challenge the aggregate limits, tweeted: “FREEEEDOMMMMM!!!!”

What comes next? Although the court’s majority opinion in McCutcheon, written by Roberts, blew up the FEC’s aggregate limits, it did not take a broader swipe at campaign finance restrictions in general. Court watchers feared a decision in McCutcheon that would open the door to future legal assaults on the bedrock of campaign finance law: direct contribution limits, such as the $2,600 limit to candidates, the $5,000 limit to PACs and party committees, and so on.

Ever since the passage of those limits in the wake of the Watergate scandal, conservatives have wanted to repeal them. They argue that such limits infringe on individuals’ right to free speech as guaranteed by the First Amendment. Supreme Court precedent says that contribution limits are constitutional so long as they serve a governmental interest—namely, preventing corruption and the appearance of corruption. The high court has typically struck a balance between the First Amendment and combating corruption and its appearance.

However, for now, Chief Justice Roberts and Justices Antonin Scalia, Anthony Kennedy, and Samuel Alito have chosen not to question those basic contribution limits. Only Thomas, in his separate opinion, argued for overruling Buckley v. Valeo, which said those basic limits were constitutional. The question going forward is whether Thomas can convince his fellow conservatives to join his cause and demolish the bedrock of modern campaign finance laws.

*This incorrectly said the contribution limit to party committees was $5,000. Return.