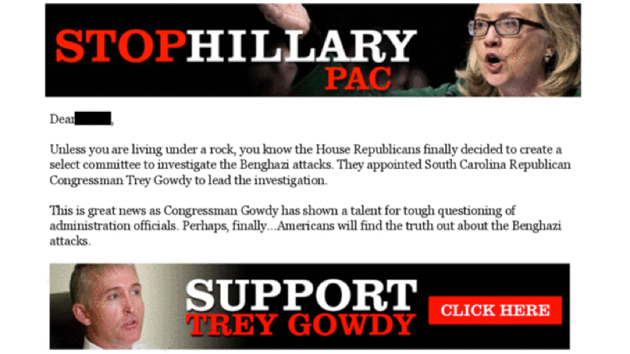 If you had any iota of doubt that the right’s never-ending obsession with Benghazi is not driven by its antipathy toward (or fear of) Hillary Clinton and by a desire to raise money for conservative outfits, then please see the fundraising email below that was sent out this week by the Stop Hillary PAC. Dispatched to conservative mailing lists, the solicitation depicts the Benghazi inquiry as all about Clinton, accusing her and her comrades of mounting a cover-up and successfully (apparently) neutering all previous congressional investigations.

The letter is not subtle:

As you know, previous attempts to uncover the truth were met with stonewalling by Hillary Clinton and Obama administration apologists.

Make no mistake: this stonewalling has EVERYTHING to do with protecting Hillary Clinton’s chances of becoming President in 2016. You could hear the desperation in Hillary’s own voice when she shrilly yelled, “WHAT DIFFERENCE DOES IT MAKE!!!!” at a fact-finding hearing.

Clearly, Hillary Clinton and those surrounding her think the deaths of 4 brave Americans makes no difference. Clinton simply cannot be troubled with anything that might stain the red carpet that has been rolled out for her Presidential run by the liberal elite and their accomplices in the media.

But now that Rep. Trey Gowdy (R-S.C.) has been appointed by House Speaker John Boehner to run a select committee on Benghazi, the Stop Hillary PAC notes, there is finally a chance the truth will emerge. Unless, of course, Clinton and her henchmen destroy Gowdy. The Stop Hillary gang presents this as a real possibility:

Remember, those that dared to uncover the truth about the Monica Lewinsky/Bill Clinton affair and Clinton’s lies under oath about it? The Clinton’s methodically destroyed the careers and reputations of those that dared to lead the impeachment proceedings, including Congressman Bob Livingston, Bob Barr, Henry Hyde, Newt Gingrich, Helen Chenoweth, and Dan Burton.

Yet these supposed Clinton victims either were not undone by the Clintons or did not fare so badly. Livingston did resign from the House—but because of an extramarital affair. Gingrich was forced out of the House speakership by his fellow GOPers. Still, his career seems still to be kicking. Barr remains in the game; he ran as the Libertarian Party’s presidential candidate in 2008, and days ago he won enough votes in a Georgia primary to make it to the runoff for a GOP congressional nomination. Burton—who relentlessly pursued the conspiracy theory that Clinton White House aide Vince Foster was murdered (and did not commit suicide)—stayed in the House until 2012, when he resigned. Chenoweth, too, left the House on her own accord, sticking to a pledge to serve no more than three terms. Hyde carried on in the House until his 81st birthday in 2005, when he announced he would retire.

But the Stop Hillary PAC warns that Americans who want the truth about Benghazi ought to be worried about Gowdy’s fate. There is, however, a way for these Americans to help: They can sign the Stop Hillary PAC’s “statement of support” for Gowdy and, of course, send money to the PAC. If you cannot part with $50, $100, $250, $500 or more, the group suggests a symbolic donation of $20.16. “If Congressman Gowdy can finally uncover the truth, then, perhaps we can stop Hillary once and for all…because, she MUST BE STOPPED,” the group notes.

The letter, not surprisingly, does not say how the Stop Hillary PAC will use these contributions to help Gowdy—who with subpoena power shouldn’t need that much assistance. But the group’s filings with the Federal Elections Committee might cause a potential donor to be concerned. From the start of 2013 until the end of this past March, the group raised $462,749. In this time period, it spent $407,970. About $110,000 of that went straight to fundraising consultants. And most of the rest was paid out to direct mail, political consulting, and PR firms. According to Open Secrets, the PAC has devoted about 90 percent of its expenditures to fundraising overall. This stat gives the impression that the group exists largely to raise money for itself. (The honorary chairman of the Stop Hillary PAC is Colorado state Sen. Ted Harvey, a Republican who once claimed that California wildfires were set by Al Qaeda. They were not.)

Democrats who charge that the new Benghazi committee was established to allow conservatives to bash Clinton and keep milking their movement grassroots for cash need look no further than the Stop Hillary PAC. Its email ends with this enticement: “the first 2,500 patriots” who send $20.16 or more to the PAC to support Gowdy will receive “our extremely popular Stop Hillary window sticker.”