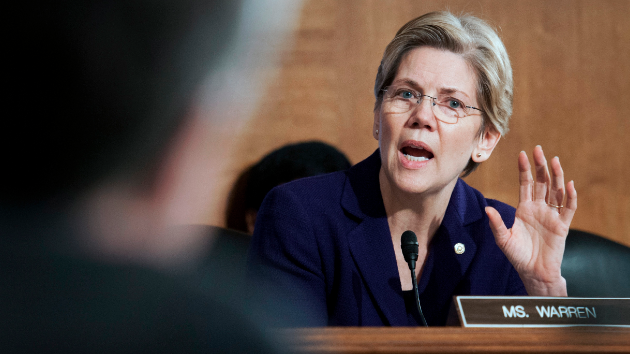 Democrats plan to use a student loan bill introduced Tuesday by Sen. Elizabeth Warren (D-Mass.) as a wedge issue in the 2014 midterm elections, forcing Republican candidates to either support it or explain why they don’t. Dem strategists think Warren’s legislation—which would lower interest rates on most federal student loans below 4 percent, reducing millions of Americans’ bills by hundreds or thousands of dollars a year—could help turn out young people, who tend to vote for Democrats. Fifty-seven percent of Americans ages 18 to 24 say student loan debt is a “major” issue for them, according to a recent Harvard poll.

Senate Democrats plan to hold a vote on Warren’s bill, or a version of it, it early June, and to hold Republicans who vote against it accountable. The bill, which would be funded by eliminating tax breaks on millionaires, is one plank in what Democrats have dubbed their “Fair Shot Agenda,” an election year slate of proposals aimed at highlighting Republican opposition to politically popular legislation. (The Fair Shot campaign also includes raising the minimum wage and equal pay legislation, measures Senate Republicans have blocked.)

Some Dems are already on the attack. Sens. Al Franken (D-Minn.) and Brian Schatz (D-Hawaii), as well as Shenna Bellows, who is running against Sen. Susan Collins in Maine, and Rick Weiland, who is hoping to replace outgoing Democratic Sen. Tim Johnson in South Dakota, are holding events this week aimed at pressuring their Republican opponents to support Warren’s legislation—or embarrass themselves by publicly opposing it.

Warren’s student loan bill “is a perfect messaging item for the Democrats,” says Ross Baker, a professor of political science at Rutgers University. He expects Democrats to continue to use the student debt issue to hammer Republicans, who generally oppose debt relief, over the next six months. “Republicans, in general, will oppose [Warren’s bill],” Baker adds, which he says could raise the ire of young voters—a large portion of whom are currently expected to sit out this election—and push them to the polls.

Adam Green, the cofounder of the Progressive Change Campaign Committee, a liberal PAC that supports progressive candidates and calls itself the “Elizabeth Warren wing of the Democratic Party,” says that Warren’s bill is already having an effect. His group has launched a national petition in support of Warren’s bill, which the group is sending to all Republican Senate candidates this week. The progressive PAC is also organizing events aimed at pressing four more Senate GOP candidates on the student loan issue.

The PCCC is not the only outside group hoping use student loan debt to take down GOPers. In April, Student Debt Crisis, a group that advocates for student loan interest rate reform, nominated Rep. John Kline (R-Minn.) for television host Bill Maher’s “Flip-A-District” contest, a campaign Maher launched to find the worst member of Congress and boot him from office. The group chose Kline because he is one of the few members of Congress who has proposed raising student loan interest rates. A few weeks after the group entered Kline in the running, he shot from 75th to first on Maher’s list of terrible lawmakers.

Last year, GOP senators filibustered student interest rate relief before acquiescing to a compromise bill at the 11th hour. That legislation prevented interest rates on new federal loans from doubling to 6.8 percent. But the law didn’t do anything to help the 40 million Americans swimming in existing student loan debt, some of whom are paying back loans with rates of up to 10 percent. Warren’s bill—cosponsored by 23 other Senate Democrats—would reduce most of these Americans’ federal student loan interest rates to the current rate on new undergraduate loans: 3.86 percent.

Even if her bill is approved by Congress this year, Warren says she will keep pushing for further debt relief for students. She says she’ll only stop when the government no longer profits off student debt. The feds will rake in $66 billion in revenue on the federal student loans the government doled out between 2007 and 2012. As Warren said on the Senate floor Tuesday, “Those are the kind of interest rates that would make a Fortune 500 CEO proud.”