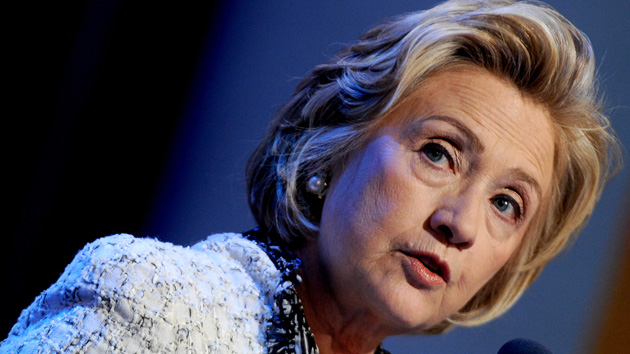 Bill and Hillary Clinton spent the final years of the Clinton presidency cash-strapped and buried in legal debts. But they weren’t hurting for long: In her final days as first lady, Hillary landed a near-record $8 million advance for her memoir Living History, and by the time her 2008 presidential campaign was in full swing, the Clintons were flush, together having earned $109 million in the previous seven years.

When she left her position as secretary of state in February 2013, she had for the first time in decades something unusual: time off. She had a year or two to do whatever she wanted before deciding whether to run for the White House. In that period, she joined the family foundation and wrote a new memoir. She also hit the speaking circuit—and cashed in, pocketing speaking fees from businesses and trade groups that certainly have an interest in currying favor with a possible president.

Since leaving State, Clinton has made more than 90 speeches and notable appearances. Her hosts have included private equity firms, investment banks, nonprofit galas, trade association conventions, and a slew of colleges and universities. At least two-dozen of those were paid speeches. With her usual fee of $200,000 a speech, Clinton has banked close to $5 million for her speeches and appearances in the last 15 months. (A spokesman for Clinton did not respond to multiple requests for comment.)

Here is a list of Clinton’s speeches and appearances:

Hillary’s for-profit speaking gigs raise a serious question for a possible presidential candidate: Is she being courted by and/or providing access to the well-heeled companies and industry groups—including Goldman Sachs, the Carlyle Group, Kohlberg Kravis Roberts, the National Association of Realtors, and the US Green Building Council, among many others—that have paid her to speak? “This is a great way for a company to get access to her, to hear what she’s thinking, to be remembered if and when she does run for office, and to help her grow that nice little nest egg that she and her husband have been intent on building,” says Meredith McGehee, policy director at the Campaign Legal Center.

Spokespeople for several of the companies and organizations that have hosted Clinton as a speaker say her contract prevents them from disclosing her payment, though several point to news reports pegging her usual fee at $200,000 a speech. The New York Times reported last summer that Clinton’s typical speech features “pithy reflections” and lessons from her tenure as secretary of state such as “Leadership is a team sport,” “You can’t win if you don’t show up,” and “A whisper can be louder than a shout.” The cost of travel and the use of private jet, according to the Times, are negotiated as part of her fee.

It’s a time-honored tradition for former presidents and cabinet members to exploit their previous government service after leaving office. The month he vacated the White House, Ronald Reagan jetted off to Japan, where he made $2 million for just two speeches, an eyebrow-raising move, given fears among some at the time that the Japanese were gaining undue economic power and influence in the United States. What makes Hillary Clinton’s situation different is she may not be done with public office, with a shadow presidential campaign waiting in the wings.

This cash grab between public-service gigs does have some precedent. As Jeffrey Engel, director of the Center for Presidential History at Southern Methodist University, points out, Dwight Eisenhower commanded a hefty book advance and launched a nationwide speaking series between leaving the US Army and joining Columbia University as its president—four years before he would run for president in 1952. Richard Nixon also hit the speaking circuit after he served as Ike’s vice president (and lost his 1960 presidential bid) and before he campaigned again for the presidency in 1968.

Clinton’s decision to pocket six-figure sums from Big Finance heavyweights and other corporate players might tarnish her public image, says Russ Baker, a Rutgers University political scientist. Baker notes that Clinton’s coziness with Wall Street could come back to bite her in a Democratic primary, especially at a time when populist figures such as Sen. Elizabeth Warren (D-Mass.) and New York City Mayor Bill de Blasio are ascendant within her Democratic Party.

“If somebody comes at her from the left, I certainly can imagine [private equity firm] Kohlberg Kravis Roberts being used against her as a battering ram,” Baker says. “It plays into a narrative that almost anybody left of her would want to develop, that she’s basically part of the Wall Street wing of the Democratic Party.”

For Clinton, her speaking gigs with Wall Street financiers and Hollywood bigwigs can help lay the groundwork for the massive fundraising effort she’ll need to mount if she runs in 2016, says Common Cause policy counsel Steve Spaulding. Clinton’s speaking fees are also distinct from, say, a campaign or PAC donation, because the money goes directly to her. And for those hosting Clinton, they get the kind of access that regular people can only dream of, says the Campaign Legal Center’s Meredith McGehee. “Here’s the problem: You and I, most of the people we know, there’s no way in hell we can afford to have Clinton come speak and spend time with us,” McGehee says. “This speaking engagement game is a game that favors the wealthy interests, just like our campaign finance system.”