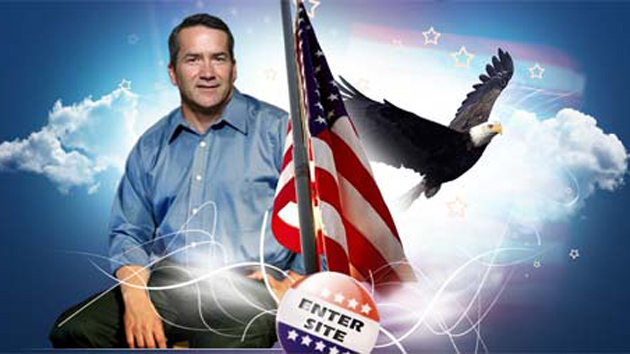 Update, July 23: On Tuesday, Hice breezed past Michael Collins to win the Republican nomination and all but guarantee a trip to Washington in January.

In his seven years in Congress, Rep. Paul Broun (R-Ga.) distinguished himself by calling biology “lies straight from the pit of hell” and accusing President Barack Obama of establishing a secret national police force to push a Marxist dictatorship. But the man who may replace Broun in Washington could outdo him.

In a 2012 book, that candidate—pastor and talk radio host Jody Hice—alleges the gay community has a secret plot to recruit and sodomize children. In It’s Now or Never: A Call to Reclaim America, Hice also asserts that supporters of abortion rights are worse than Hitler and compares gay relationships to bestiality and incest. He proposes that Muslims be stripped of their First Amendment rights.

On Tuesday, Hice clinched a spot in the runoff to replace Broun, who declined to run for re-election in order to run for Senate. Hice will face businessman Michael Collins in the July 22 runoff. In a district that gave 62 percent of the vote to Mitt Romney two years ago, Hice, the leading vote-getter in the first round of balloting, stands a good chance of being elected to Congress.

With his book, Hice checks virtually every box of the social conservative job application. Referring to the arrest of anti-gay demonstrators in Elmira, New York, Hice likens local law enforcement to “the Gestapo.” And this is part of a nationwide assault: “Evidently there are many who believe a ‘Gestapo-like’ presence is needed by the government in order to corral and keep under control, all these ‘dangerous’ Christians.”

Hice claims homosexuality causes shorter life spans and depression, and he insists same-sex couples cannot raise healthy children. He writes, “Some ask the question, ‘How does same-sex ‘marriage’ threaten your  marriage?’,” he writes. “The answer is similar to asking, ‘How does a trashy neighborhood affect you?’ It might not affect you at all on a personal level. But, we are not talking about ‘a’ same-sex marriage. We are talking about an effort to redefine marriage, and that would have drastic results and irreversible consequences!”

Hice emphasizes that “love” is a shallow and insufficient basis for marriage. “The concept of ‘love’ is not the issue when it comes to marriage!” he writes. “People love all kinds of other people and things, but that does not grant permission for marriage. It is illegal to marry a child or a sibling. It is illegal to marry a pet, which many people love dearly.” He claims that Christians who speak out against the evils of homosexuality are persecuted—and as a result of gay manipulation, “the nation’s entire system of justice is being destroyed.”

Fact-checking isn’t Hice’s strong suit. At one point in his book, he quotes at length from a 1987 column by Michael Swift, a gay writer, to suggest that gay people prey on children:

We shall sodomize your sons, emblems of your feeble masculinity, of your shallow dreams and vulgar lies. We shall seduce them in your schools, in your dormitories, in your gymnasiums, in your locker rooms, in your sports arenas, in your seminaries, in your youth groups, in your movie theater bathrooms, in your army bunkhouses, in your truck stops, in your all male clubs, in your houses of Congress, wherever men are with men together. Your sons shall become our minions and do our bidding. They will be recast in our image. They will come to crave and adore us.

Hice cites this passage to show what is at stake in the battle for America’s soul. “These shocking words by Michael Swift have been considered part of the ‘gay manifesto’ by many, and reveal the radical agenda that is currently threatening our nation,” he writes.

There is one hiccup. Hice omitted first sentence of Swift’s column, which noted that the entire essay was satirical.

Hice also offers an extreme interpretation of the Constitution, claiming states can nullify federal laws and take up arms against the federal government if they consider a federal law unjust. “[T]he ‘Whiskey Rebellion’ of 1794 showed that civil disobedience and the refusal of some state officials to enforce federal law is effective,” he wrote. “As a result, the ‘Whiskey Tax’ was nullified and the following elected cycle led to a repeal of the unpopular tax.”

This is a misreading of the historical record. The whiskey tax was not nullified, and it wasn’t repealed until seven years after President George Washington led an army to crush the rebellion.

In Hice’s view, the United States took a turn for the worse after the Civil War, when President Abraham Lincoln stripped away the hallowed rights of states. He says “the technical reasons for the War are still being debated,” but he mentions that the war—by undermining states rights—essentially ruined the original idea of America.

And in an echo of Broun, who once called for Muslims to receive special treatment at airport security, Hice argues that Muslim immigrants constitute an existential challenge to the United States. “[A]lthough terror is a real threat and must be taken seriously, the worst plan is the Muslim Brotherhood’s attempt to take over America!,” he writes. “Don’t think that it can’t happen. Europe once considered itself impervious to Islam. Today we are being told that Europe will be 20 percent Islamic by mid century because they were ignorant to the problem until it was too late. The United States had better wake up to the fact that this threat is real!”

Peaceful Muslims can be tolerated, he notes, but all Muslims must be treated with suspicion: “Although Islam has a religious component, it is much more than a simple religious ideology. It is a complete geo-political structure, and as such, does not deserve First Amendment protection.”

Hice also compares reproductive rights advocates to Nazis. “How many times have we denounced the murderous acts of people like Hitler?,” he writes. “Most certainly, his actions and similar ones by other political leaders should be vehemently condemned! Yet, we so easily overlook the genocide that has been committed within our own country. Our murderous dealings are much worse than Hitler’s six million Jews or Mussolini’s three hundred thousand. The genocide in America is inexcusable! It is worse than genocide. We are guilty of eugenics!”

Hice’s path to politics began in court. In 2003, inspired by “Ten Commandments Judge” Roy Moore, the embattled chief justice of the Alabama supreme court, Hice started an organization to defend the right to post tablets in public places. Hice convinced cash-strapped Barrow County to enter into a lengthy legal battle and promised to reimburse the county for all expenses. But when the county lost the case and was forced to cover the expenses of the winning side (the ACLU), Hice backed out, leaving the local government with a $150,000 tab—and Hice with a reputation as a social-conservative leader in the state. He first ran for Congress in 2010, and made it to the primary runoff in a neighboring district, but he lost to now-Rep. Rob Woodall.

Hice’s biggest splash that cycle: a billboard featuring President Obama’s name next to a Soviet symbol. As he writes in his book, “In my opinion, the ‘C’ in Obama’s slogan should have been the hammer and sickle, the emblem of socialism, because that is the type of ‘change’ he implemented.”

On Tuesday, Broun finished fourth in the GOP Senate primary, forcing him into early retirement. But with Hice, residents of the 10th district have a chance to keep the dream alive.