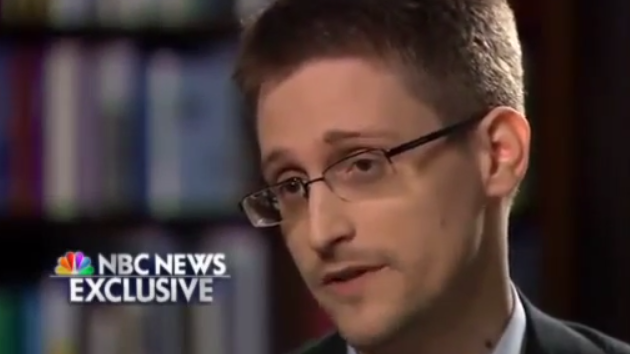 Update 2, Friday, 8:35 AM EDT: In an interview published in the Washington Post, Edward Snowden said the NSA’s email release “is incomplete and does not include my correspondence with the Signals Intelligence Directorate’s Office of Compliance [or] concerns about how indefensible collection activities such as breaking into the back-haul communications of major US internet companies – are sometimes concealed.” He added, “The fact is that I did raise such concerns both verbally and in writing, and on multiple, continuing occasions – as I have always said, and as NSA has always denied.?”

Update 1, Thursday, 2:25 PM EDT: The NSA has released the email it received from Edward Snowden on April 5, 2013. In the email, Snowden posed questions regarding a training session. He asked whether presidential executive orders supersede federal laws. He also asked about Department of Defense regulations and Office of Director of National Intelligence rules, wondering which has greater precedence. This email did not refer to any concerns about NSA surveillance programs. Three days later, the general counsel’s office replied that EOs “cannot override a statute” and that DOD and ODNI regulations “are afforded similar precedence.” The email noted, “please give me a call if you would like to discuss further.”

The National Security Agency is firing back against former contractor Edward Snowden, who insists he reported his concerns about illegal surveillance activity directly to the agency in writing before leaking his treasure trove of super-secret documents. The NSA says it will today release an email it received from Snowden that undercuts his assertion.

Snowden’s Odd Email to the NSA Deepens the Mystery

Snowden has maintained that he alerted intelligence officials internally more than “10 times” about his concerns about NSA activities prior to becoming a leaker. Last night, as part of its interview with Snowden, NBC reported that two US officials confirmed that Snowden had sent at least one email to the NSA’s general counsel raising “policy and legal questions.” The network’s revelation drew attention; the Intercept’s Glenn Greenwald called it the “biggest news” from the interview. After all, NSA officials have previously denied that Snowden reported wrongdoing to senior officials. In a speech on April 15 in Tampa, Director of National Intelligence James Clapper said that “Snowden isn’t a whistleblower.” He asserted that Snowden “could have reported [concerns] to seniors at NSA…he chose not to go to any of those places.”

Now that NBC has confirmed that Snowden did contact the NSA legal brass—undermining the NSA’s previous claims—the agency is acknowledging that it heard from the contractor before the leaks. But it is claiming that Snowden’s communication with the general counsel’s office does not back up his story.

On Thursday, in an email sent to Mother Jones, NSA spokeswoman Marci Green Miller said that the NSA has “found one email inquiry by Edward Snowden to the office of General Counsel asking for an explanation of some material that was in a training course he had just completed. The e-mail did not raise allegations or concerns about wrongdoing or abuse, but posed a legal question that the Office of General Counsel addressed. There was not additional follow-up noted.”

She added, “There are numerous avenues that Mr. Snowden could have used to raise other concerns or whistleblower allegations. We have searched for additional indications of outreach from him in those areas and to date have not discovered any engagements related to his claims.”

She noted the NSA will make the email public later today.

Given that Clapper and the NSA previously denied that Snowden had made any contact with the higher-ups, the agency’s discovery and release of this email will certainly be seen as somewhat suspicious by some. But Snowden’s claim and the NSA’s response are now good material for his next interview.