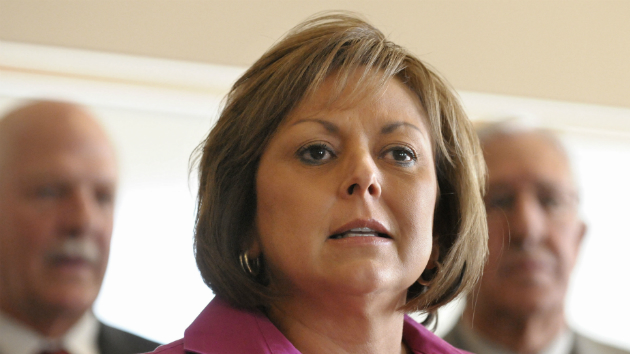 A recently unsealed whistleblower lawsuit filed in New Mexico state court makes a series of explosive allegations against appointees of rising GOP star Gov. Susana Martinez, accusing high-ranking officials in her administration of public corruption, mismanagement, and intimidation. It claims that officials at the state’s economic development agency engaged in extramarital affairs that could expose the state to sexual harassment charges and that officials tried to silence employees who reported contracting violations and other wrongdoing.

The 22-page complaint—filed February 10 on behalf of two former state employees—claims that a company co-founded by Martinez appointee Jon Barela, secretary of the New Mexico Economic Development Department, secretly benefited from a state tax credit program. The complaint also alleges that aides to Martinez instructed a state employee to use his personal email for sensitive government work to avoid being subject to public records requests; that Barela and his deputy, Barbara Brazil, ignored waste and mismanagement at the state’s Spaceport project in southern New Mexico; and that Brazil ran several Dairy Queen franchises she had an interest in “while simultaneously being paid by the State of New Mexico.”

The whistleblowers are Kurt Saenz, the former chief financial officer at the New Mexico Economic Development Department, and Brent Eastwood, a former Army infantry officer and RAND Corporation analyst who ran the department’s international trade and business advocacy divisions. Both men are Republicans and were appointed by Martinez. Eastwood’s wife, Melanie Sanchez-Eastwood, worked as a scheduler on Martinez’s 2010 gubernatorial campaign. A source familiar with the case says the FBI has interviewed Saenz and Eastwood about their allegations. Eastwood also anonymously reported his allegations to the state attorney general and the state auditor. (Saenz and Eastwood declined to comment for this story.)

The lawsuit comes at an inopportune time for Martinez. For months, she and Barela have mounted a public campaign to encourage Tesla, the electric car company, to select New Mexico as the site for a new $5 billion car-battery factory. Tesla’s “gigafactory” would be the largest lithium-ion battery plant in the world, covering 10 million square feet and employing as many as 6,500 people.

In February, Tesla selected New Mexico as one of four finalists for the factory. Throughout this courtship, Barela has been front and center touting the benefits of doing business in New Mexico. While campaigning for governor in 2010, Martinez pledged to bring jobs to New Mexico by rooting out the kind of corruption in state government that the whistleblower suit alleges. “We must get rid of [corruption] completely,” she said then.

“Requested By The Governor”

Kurt Saenz was hired in April 2011 as the Economic Development Department’s CFO and the director of its administrative services division. It wasn’t long, he asserts, before he spotted trouble.

That summer, his suit alleges, Saenz discovered the department was paying a web developer more than $30,000 to build its new website without a contract—a violation of state procurement code. The company, Real Time Solutions, employed a web architect who was the wife of an Albuquerque lawyer and former Republican National Committeeman, Pat Rogers. Rogers has worked for Martinez’s gubernatorial campaign and is close to her administration. When Saenz alerted Barela to the contracting problem, Barela, the complaint says, dismissed Saenz’s concerns. Hiring Real Time Solutions, Barela told Saenz, was “requested by the governor,” according to the complaint.

The complaint states that Barela and Brazil, his deputy, pressured Saenz to keep quiet about possible contracting irregularities, telling him not to use the words “procurement code violation” around his colleagues or in emails and ordering him never to discuss the workings of the department with other state agencies. The complaint accuses Brazil of “engaging in a cover-up” and trying to “silence Saenz regarding the procurement code violations and his whistleblowing.”

Eastwood, the other whistleblower, makes similar charges. According to the complaint, two aides to Martinez—spokesman Scott Darnell and deputy chief of staff Ryan Cangiolosi—instructed Eastwood to use his personal email to discuss “sensitive information” in order to circumvent the state’s public records law. (Cangiolosi and a Martinez spokesman did not respond to requests for comment.)

The complaint also accuses Barela and Wade Jackson, the department’s general counsel and human resources director, of each engaging in extramarital affairs with subordinates in the department. Saenz says he told Barela that these affairs could expose the department to potential sexual harassment lawsuits. (Jackson did not respond to a request for comment.)

The “Slush Fund” and Tax Credits on the Sly

In March 2012, according to the lawsuit, Saenz and a colleague at the Economic Development Department gave Eastwood an internal spreadsheet containing details about the department’s Angel Investment Tax Credit, which rewarded investors in New Mexico tech and research companies with tax breaks. Eastwood, the complaint notes, reviewed the spreadsheet and one name popped out: Cerelink, a local high-tech company that specialized in cloud computing. Barela was its co-founder and a part owner when he was tapped in December 2010 to head the Economic Development Department. Saenz and his EDD colleague could find no mention of Cerelink in the department’s records, creating the appearance that the firm’s investors has received off-the-books tax breaks.

Eastwood did some digging. According to the complaint, he found that in 2011 Barela sought investments to boost Cerelink, which was struggling to stay afloat. So, the lawsuit claims, Barela dangled the state’s angel investment credit in front of prospective investors to entice them into financing Cerelink. The complaint claims that four people who eventually invested in Cerelink received $34,000 in tax credits; several of those investors, the complaint says, were donors to Barela’s failed 2010 congressional campaign. (The investors’ names are not listed in the suit.)

Around the time Eastwood says he discovered the Cerelink tax credits, Barela and Brazil, he alleges, gave him an unusual assignment: Drive south to Chihuahua, Mexico, and solicit money from businesses to pay for efforts to market the economic benefits of the border region. The suit says that Barela and Brazil called this a “slush fund.” Eastwood notes that he told the pair he thought such a fund was illegal and feared being kidnapped or killed by Mexican drug cartels operating on the border.

The lawsuit contains other allegations of mismanagement and dysfunction. Eastwood claims to have witnessed Brazil “working three (3) Dairy Queen franchises which she had a personal interest in while simultaneously being paid by the State of New Mexico.” Barela and Brazil also allegedly moved the Economic Development Department’s Albuquerque office to a location next to one of Brazil’s Dairy Queens “in order for Brazil to be able to work at the business while being paid by the State of New Mexico.” Eastwood also alleges costly overruns and mismanagement at the Spaceport, the state-funded launch site used by Virgin Galactic, the commercial space travel company.

Eastwood, according to the lawsuit, told his bosses in December 2011 that he planned to blow the whistle, and Saenz and Eastwood claim their whistleblowing led to their eventual dismissal. On April 11, 2012, the complaint says, Barela confronted Eastwood in Eastwood’s office, pointing a finger at him and saying, “Come and get me.” Then, the lawsuit alleges, Barela grabbed an American flag and slammed it onto Eastwood’s desk in what the complaint calls “an attempt to bait Eastwood into a physical confrontation.”

Barela fired Eastwood that day, and state troopers were called to oversee his departure. Saenz was fired the following August.

Since their firings, Saenz and Eastwood’s complaint states, “each had their characters and professional reputations defamed, each was ‘black-listed’ and/or refused employment for positions within the state of New Mexico and outside governmental agencies that they were fully qualified to perform.” The defendants in the case have requested a jury trial.