Google! It’s a company. Big one! Real big. Important too! The employees who work there work super hard, probably. Long hours, one imagines. Now let’s not overdo this. It’s not like they’re Chilean coal miners, but I think it’s fair to assume that they spend a lot of time away from their families. The children of Google engineers probably spend a similar amount of time wondering, “Why does daddy care more about the internet than me?” or “Why did mommy miss my recital? I understand that Google+ was down, but who would have even noticed? I’m her child for God’s sake!” Anyway, one way of remedying this would be to run away to an orphanage and live some sort of 21st century Dickens novel. And, yes, life would be tough but in the end, say come Christmas, you and all the other orphans would gather around a fire and there’d be turkey and apple cider and you’d speak in a Cockney accent and “another year in the books, governor! Things have been better but at least we’ve got each other!”

If you don’t want to go the orphan route, you could follow the example of Katie, a little girl whose dad works at Google. She wrote to his boss, Daniel Shiplacoff, and asked for daddy to be given a day off. 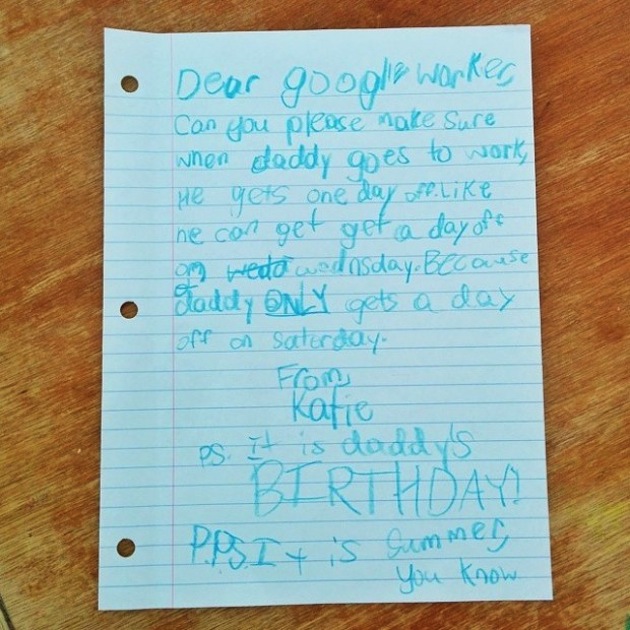 It’s a bit hard to make out but it says: “Dear google worker, Can you please make sure when daddy goes to work, he gets one day off. Like he can get get a day off on wednesday. Because daddy ONLY gets a day off on saturday. From, Katie. P.S. It is daddy’s BIRTHDAY! P.P.S. It is summer, you know.”

Shiplacoff responded with a letter of his own: 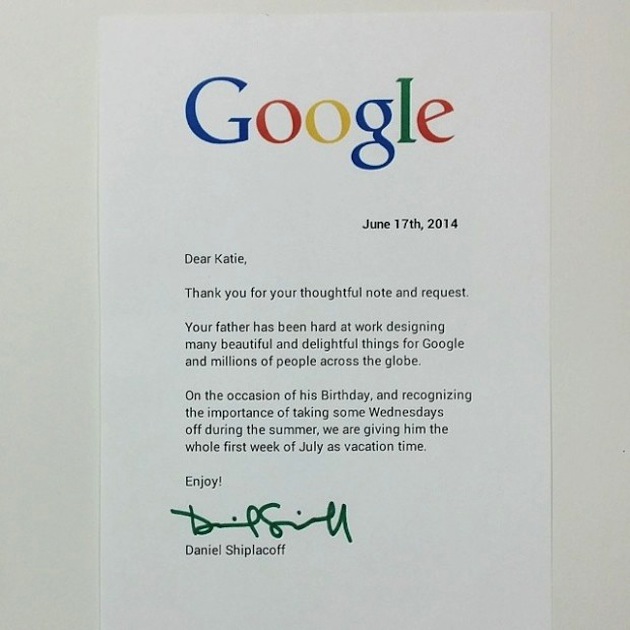 Now Katie’s dad gets a whole week off to spend with his daughter. Presumably he will in fact spend it with her. That would be awful, right? If he didn’t? If he went and spent a week with his secret family in Hawaii? Not that he has a secret family. I don’t know him. He probably doesn’t. But if he does, he should make that secret family write an adorable letter if they want to see him. This is Katie’s time.