Hold on to your hats! Australia’s already-bizarre carbon price adventures veered into the utterly surreal overnight.

Picture this: an eccentric billionaire mining baron, most famous outside Australia for commissioning a replica of the Titanic, appearing alongside the world’s most recognizable climate campaigner and former US vice president, Al Gore, to announce Australia’s relatively new carbon tax will be scrapped, and a new emissions trading scheme proposed, effectively screwing over the sitting conservative prime minister, Tony Abbott, who is hell-bent on getting rid of carbon legislation altogether.

It’s a big blow to a prime minister who said recently in Canada that he has “always been against” an emissions trading scheme, and believes fighting climate change will “clobber the economy.”

For watchers of Aussie politics, it was a visual feast of weirdness. For US readers, imagine—I don’t know—industrialist Charles Koch jumping on stage with writer and activist Bill McKibben and you’re getting close. 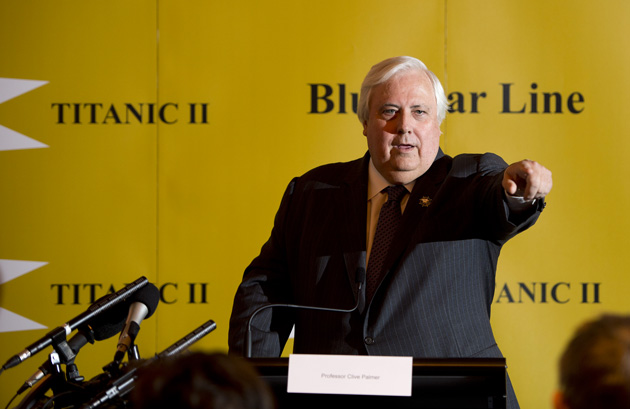 Clive Palmer speaking at a press conference to unveil plans to build a an almost-exact replica of the ill-fated Titanic, in March 2013. Ben Cawthra/ZumaPRESS

Al Gore has shared a press conference podium, and political common ground, with many influential leaders in his time, but Clive Palmer must be among the most unexpected. The mining magnate’s upstart political group, the populist center-right Palmer United Party (PUP), was elevated to the Australian political heavyweight class during last year’s national elections, and is now on the verge of holding the balance of power in the Australian Senate, or upper house—a position that possesses outsized power to wheel and deal with a government intent on getting laws passed.

That has meant all eyes are on Clive, who owns a nickel refinery and large swathes of land laced with coal and iron ore, along with several jets and resorts: not the climate’s most likely hero.

A bit of backstory: Abbott took office last year after campaigning relentlessly to “scrap the toxic tax” and do away with the other parts of the carbon price legislation introduced by former-PM Julia Gillard. The carbon tax would have finally transitioned into a fully-fledged emissions trading scheme in mid-2015. Since the election, Australia’s conservative government led by Abbott has been gearing up to axe the entire package for good.

Under Tony Abbott’s replacement plan, the package would be scrapped in favor of a policy called “Direct Action”, which critics say will do little to address carbon emissions, and cost taxpayers a hell of a lot of money. The repeal will certainly pass the lower house, but getting Clive Palmer on side was crucial to its passage through the Senate.

Meanwhile, Clive Palmer, a fantastical maverick-type (an enormous Tyrannosaurus rex presides over one of his golf courses), appears to be enjoying his newly found political power, basically telling Abbott “not so fast.” He has indeed agreed to axe the tax, but is now pushing instead to keep some form of emissions trading scheme (which his party will introduce). Palmer’s emissions trading scheme would be toothless and non-competitive, at least at first, with the carbon price set to zero until Australia’s major trading partners like China and South Korea effect similar schemes.

All of this is made even more baffling since Clive Palmer himself only recently rejected the scientific consensus on climate change, telling the Australian Broadcasting Corporation in April that “There’s been global warming for a long time. I mean, all of Ireland was covered by ice at one time… so I think that’s part of the natural cycle.”

But at this week’s performance, he made an incredible about-face:

“Australia has got an opportunity to set a standard which can act as a catalyst for the whole world, to set a fair framework which the world can follow,” Palmer said. “As President Obama in the US has shown, great leadership and encouraging all countries to act, Australia needs to do its fair share.” Palmer argues that without a trading scheme, Australian businesses will get left behind. Another motivation might be more personal: there’s a long-standing distrust between Palmer and Abbott, the prime minister.

“All of these developments add up to the world moving to solve the climate crisis,” he said.

But climate change has washed Canberra’s corridors of power in political blood for years, and it seems that no matter how hard Tony Abbott tries to finally put it to rest, there’s no end in site, writes Lenore Taylor at The Guardian:

It is a dramatic, if slightly confusing, eleventh hour conversion to the climate change cause for Clive Palmer, millionaire would-be coal miner who… just two months ago didn’t seem to think global warming was a thing. After contributing to the downfall of three Australian prime ministers, two opposition leaders and seven years of bitter and acrimonious debate, carbon policy is now presenting yet another prime minister with some serious dilemmas.