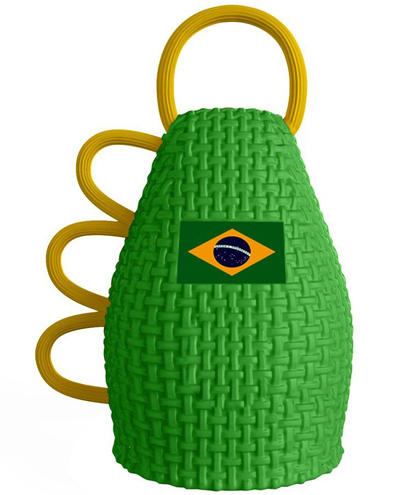 Four years ago, the vuvuzela was having a moment. An “instrument of torture” alone, a “swarm of angry bees” in a pack, the South African plastic horn droned endlessly in the background of World Cup games. (Having attended a World Cup match with my vuvuzela, I can explain and defend the practice—blowing a big loud horn is really goddamn fun.) While audiences at home complained, officials for this year’s World Cup in Brazil had a different reaction—they needed one of their own.

Enter the caxirola. Designed by homegrown musical icon Carlinhos Brown specifically for the World Cup, the caxirola is a plastic shaker with finger grips that was certified by the Brazilian Ministry of Sport and FIFA, international soccer’s governing body, as the “official noisemaker” of this summer’s tournament. Brown and Brazilian President Dilma Rousseff showcased the instrument at an event last year, with Rousseff calling it more beautiful than the vuvuzela. (That’s nice, because it’s certainly not louder: Researchers at Brazil’s Federal University of Santa Maria determined last year that it would take 30,000 caxirolas to produce the same sound pressure level as a single vuvuzela.)

FIFA kept an eye on the caxirola design process, sticking an official seal on each noisemaker once they were ready for production. After South Africa, where vuvuzelas were sold on the cheap by independent vendors outside stadiums and in cities across the country, it’s not hard to imagine the soccer monolith regretting every dollar that went to street peddlers and corner stores instead of its own coffers. Now, you can buy $14 caxirolas on FIFA’s official website, either in Brazil’s traditional yellow and green or decorated with your country’s flag.

There’s just one problem—you won’t be able to use them at the games. Brazil and FIFA drastically underestimated fans’ propensity to throw things: In an April 2013 match where fans were given free caxirolas, they eventually pelted the field with the noisemakers. While local authorities cited concerns over the damage a thrown caxirola could to to someone’s head, as well as the potential for the shaker’s finger grips to be used like brass knuckles, FIFA banned the instrument from last year’s Confederations Cup in Brazil while it was sent back to the drawing board. The new and improved version featured softer grips—bad for punching!—and an inflatable body. It turned out to be too little too late, as Brazil’s Ministry of Justice has banished the caxirola from World Cup stadiums.

That hasn’t stopped FIFA is still trying to unload the noisemakers. They’re listed third among the FIFA store‘s bestsellers, with the site imploring buyers to “Shake your caxirola in support of the 2014 FIFA World Cup!” While the vuvuzela was not exactly a grassroots phenomenon—despite arguments over the horn’s invention, a single company popularized it in 2002—it was at least in widespread use in the years prior to South Africa’s World Cup. Brazil and FIFA’s takeaway—that South Africa’s traditional instrument was all anyone talked about in 2010, so let’s create one for Brazil and sell it—turned out to be a little too optimistic (or a little too cynical).

Even the caxirola’s designer is having second thoughts. “When I see this instrument sold for $14, I think it’s a bit absurd,” Brown told the Wall Street Journal last week. “Maybe it’s not an instrument that’s good for the World Cup.”