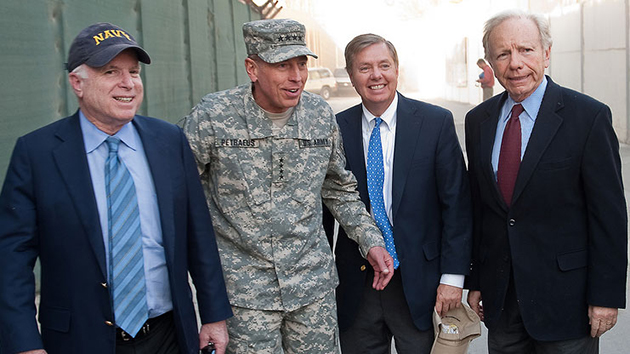 Last week, Sen. John McCain (R-Ariz.) went ballistic. In response to the intensifying crisis in Iraq, an apoplectic McCain took to the Senate floor and demanded the resignation of President Barack Obama’s entire national security team. He huffed that Obama’s advisers have “been a total failure.” He suggested that Obama was somehow responsible for the present predicament in Iraq. And what was McCain’s big idea for addressing the crisis? What steps would he take had he not been prevented from becoming commander in chief by Obama? The senator proposed calling in former General David Petraeus, who led US forces in Iraq during the 2007 surge, and former General James Mattis, who succeeded Petraeus. That was it: Ask Petraeus what to do.

Well, it turns out, McCain wouldn’t abide by his own advice. Earlier this week, I contacted Petraeus’ office to ask what he thought the president should be doing in Iraq. Not surprisingly, Petraeus did not respond to the invitation (which was probably one of many from reporters). But on Wednesday, Petraeus, speaking at a conference in London, did share his current views. He accused Iraqi Prime Minister Nouri al-Maliki of “undermining” national reconciliation—an obvious point made by most observers. He also declared that Iraq needed a more inclusive government—another obvious point that the president and others have pushed. And Petraeus dismissed the possibility of US airstrikes against the Sunni insurgents that have captured several cities in Iraq:

This cannot be the United States being the air force of Shia militias or a Shia-on-Sunni Arab fight. It has to be a fight of all of Iraq against extremists who do happen to be Sunni Arabs but extremists that are wreaking havoc on a country that really had an enormous opportunity back in 2011, has made progress in certain areas but has certainly not capitalized on that enormous opportunity in the way that we had all hoped.

McCain, apparently, wasn’t listening. On Thursday, McCain went full McCain. He called for ousting Maliki. (Obama and his aides are trying to nudge Maliki aside, but it’s not a snap-of-the-fingers task to get rid of a Washington-endorsed guy who was elected.) And McCain demanded, yes, airstrikes:

Of course Maliki has to be transitioned out. But the only way that’s going to happen is for us to assure Iraqis that we will be there to assist. And let me make it clear: No one that I know wants to send combat troops on the ground, but airstrikes are an important factor, psychologically and many other ways, and that may require some forward air controllers and some special forces.

Several other GOPers joined McCain on the Senate floor to denounce Obama. On the other side of the Capitol, House Speaker John Boehner has been blasting Obama on Iraq, accusing the president of “napping” but not proposing any specific actions. On Wednesday, Boehner refused to comment on whether Obama should order airstrikes. The crisis is confounding Obama’s GOP critics. And they’re not even listening to Petraeus.