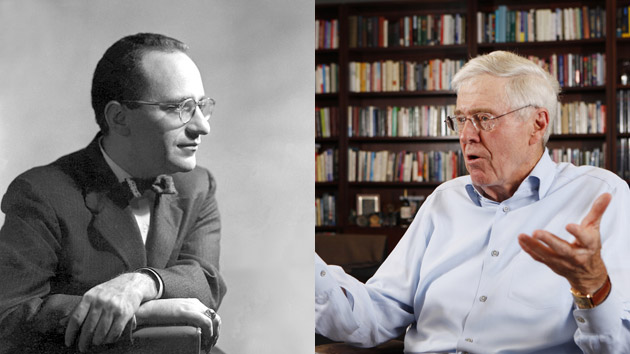 Cross-posted from Kochology, where Daniel Schulman is releasing exclusive documents and other materials gathered in the process of reporting his new book Sons of Wichita: How the Koch Brothers Became America’s Most Powerful and Private Dynasty.

Long before Charles Koch became the left’s public enemy number one (or two, depending on where David Koch falls in the rankings), some of his most vocal detractors were not liberals but fellow libertarians. None of his erstwhile allies would come to loathe him more fiercely than Murray Rothbard, one of the movement’s intellectual forefathers, with whom Charles had worked closely to elevate libertarianism from a fringy cadre of radical thinkers to a genuine and growing mass movement.

In the 1970s, Charles helped fund Rothbard’s work, as the economist churned out treatise after treatise denouncing the tyranny of government. Rothbard was a man with a plan when it came to movement-building. Where some libertarians had bickered over whether to advance the cause through an academic or an activist approach, Rothbard argued that the solution wasn’t to choose one path, but both. Charles was taken with his strategic vision.

Rothbard dreamt of creating a libertarian think tank to bolster the movement’s intellectual capacity. Charles Koch made this a reality in 1977, when he co-founded the Cato Institute with Rothbard and Ed Crane, then the chairman of the national Libertarian Party. This was a high point for libertarianism, when a busy hive of libertarian organizing buzzed on San Francisco’s Montgomery Street, home to Cato and a handful of other ideological operations bankrolled by Charles Koch.

But the relationship between Cato’s co-founders soon soured.

“Charles Koch has a practice of misusing nonprofit foundations for his own personal ends. He wants to spend that money on things that will enhance his personal image and goals, even it these expenditures are not consistent with the publicly stated goals of the foundation.”

Rothbard, who was feisty by nature, chafed under the regime of Crane and Koch—the libertarian movement’s primary financier at that time. His breaking point came during the 1980 election, when David Koch ran as the Libertarian Party’s vice presidential nominee. Rothbard and his supporters felt that, in a bid for national legitimacy, David Koch and his running mate, Ed Clark, had watered down the core tenets of libertarianism to make their philosophy more palatable to the masses. Americans today would consider their platform—which called for abolishing Social Security, Medicare, and Medicaid and eliminating federal agencies including the EPA and the Department of Energy—a radical one. But to Rothbard and his circle, it wasn’t radical enough. For instance, the Clark-Koch ticket stopped short of calling for the outright repeal of the income tax. And Clark, to Rothbard’s horror, had even defined libertarianism as “low-tax liberalism” in a TV interview.

Following the 1980 election, in which the Clark-Koch campaign claimed a little over one percent of the popular vote, Rothbard did not hold back. He penned a scathing polemic titled “The Clark Campaign: Never Again,” in which he wrote that Ed Clark and David Koch had “sold their souls—ours, unfortunately, along with it—for a mess of pottage, and they didn’t even get the pottage.” Thanks in part to Rothbard’s rabble-rousing, factional feuds and recriminations splintered the libertarian movement just as it was gaining momentum. A few months after Rothbard’s diatribe, Charles Koch and Ed Crane tossed him out of the Cato Institute and voided his shares in the think tank (which was set up, under Kansas law, as a nonprofit corporation with stockholders), a rebuke that turned their libertarian brother-in-arms into a lifelong adversary.

Rothbard would later play a cameo role in the messy battle between the four Koch brothers. In 1988, when Bill and Frederick Koch sued their brothers over control of the family foundation that had been established by their father, they dredged up Rothbard as a possible witness, seeking to depose him in the case. They hoped his testimony would damage Charles Koch’s credibility and support their contention that their brother was a tyrannical control freak who used nonprofit entities to advance his own aims.

A document summarizing Rothbard’s anticipated testimony was filed in the case, and I came across it as I pored over thousands of documents at the district court house in the Koch family’s hometown of Wichita. Rothbard, it seemed, was only too eager to denounce his onetime benefactor.

Charles Koch, Rothbard planned to testify, “involves himself in the minutest details related to the non-profit foundations with which he is associated…. He insists on personally approving even the minutest matters, such as $100 grants, stationery design and color of offices.” Rothbard contended that Charles would go “to any end to acquire/retain control over the nonprofit foundations with which he is associated” and “considers himself above the law.” And the economist further alleged:

Rothbard died in 1995, taking his grudge to the grave. By then, Charles and David Koch had abandoned the libertarian movement and struck out on their long path to becoming Republican powerbrokers. As their influence has expanded within the broader GOP in recent years, I’ve heard echoes of Rothbard’s past criticisms in the conservative nonprofit world by recipients of Koch network funding who complain of micromanagement by the Koch brothers’ political adjutants. “Nobody really works with them,” said the leader of one conservative group. “They work for them or not at all. They are kind of creating a monopoly” and attempting to “make the conservative movement theirs.”