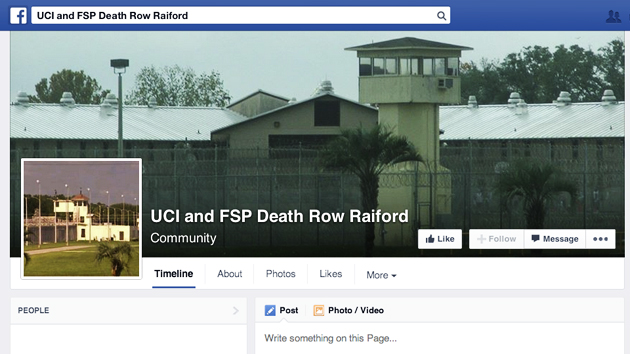 Facebook pages are usually happy places, befitting the term “social media.” They’re ornamented with vacation or baby photos, humblebrags, and cat videos. But the timeline on this particular page has rather a different emphasis. Virtually all of its photos feature orange-clad men, mostly old men. These are the faces of Florida’s condemned, men who’ve committed unspeakable crimes and are now dead, many of them, thanks to an effort by Rick Scott, the state’s Republican governor, to clear out death row during an election year.

The “UCI and FSP Death Row” page didn’t start out as place for faces of the dead. It was intended as an information source for people looking to visit loved ones at the Union Correctional Institution and Florida State Prison in Raiford—the neighboring facilities where male death row prisoners are confined. The page description is chirpy enough: “This site is a positive attempt to make everyone’s visits at UCI and FSP as wonderful as possible.”

A map on the page points out the gas station where visitors line up their cars in advance of visiting hours, which begin at 7 a.m. Posts from the page’s inception, in late 2010, feature menus and lists of what sort of food is and isn’t available in the visitor’s park. Its wall quotes letters from inmates about problems with the electricity being turned off at night, and black mold growing in the bathrooms.

But since Scott took office, and especially since his signing last year of the Timely Justice Act, designed to hasten the executions of longtime prisoners, the pace of the killings has accelerated, turning the visitor’s page into a regular feed of loss: of lost food fights, lost appeals, lost souls, and RIP posts for the condemned. So far during Scott’s first term, 17 people have been executed, a state record. Two more executions have been scheduled—for June 18 and July 10. The grim feed is likely to continue as long as Scott, who is aiming for a second term in November, remains in office.

The lack of social in this particular media stream is starting to wear on its creator. Giusi Branca is Italian, but was born in Australia and now lives in the Netherlands. Her connection to Florida’s death row is the result of an unlikely twist of fate.

Years ago, she was recruited by the Community of San Egidio, an Italian Catholic organization that helps recruit pen pals for condemned men and women. Its volunteers were having trouble reading the letters from American inmates, so the organization asked Branca to help translate. She did, and eventually the group asked her if she wanted to write letters, too. She didn’t, really. But while scanning the list of people in need of a pen pal, she was shocked to discover a familiar name: Living on death row was a man she’d known 20 years earlier when her father, a foreign service officer, was stationed in Florida, and she was a teenager.

The first rule of curating a death row site is to be respectful of  victims’ families.

At first she didn’t think it could be the same guy. She sent him a letter and forgot about it. But then she received a response from her long-lost friend, who has been on the row for nearly a quarter-century for robbing and killing a man. A death penalty foe was born: Branca now spends several weeks every year visiting her friend and helping with his appeals. (Out of respect for the privacy of her friend, and that of the victim’s family, she asked me not to name him.)

More than 360 men live on death row at UCI and FSP (women are housed elsewhere), but fewer than 10 percent ever get a visitor. After visiting UCI for the first time, Branca understood why. The visits are challenging—psychically and otherwise—and the logistics complicated; Raiford (pop. ~200) isn’t exactly a tourist destination, visiting hours are limited, and people who show up late often have to see their loved ones through Plexiglas rather than in the communal area where they’re allowed a brief hug and a kiss.

That’s one reason why an unwritten set of rules has evolved over the years, inspired by regular visitors, so that no one jumps the line over people who’ve been waiting at the gas station since 4 a.m. And of course, there are intimate searches and plenty of rules about what can and cannot be brought into the visiting area. First-timers aren’t likely to know any of this.

As Branca got to know some of the inmates’ families, she learned that many were traveling long distances. Quite a few, like her, were coming from other countries. They included elderly parents who were utterly overwhelmed by the logistics of getting into a prison. A Facebook page might make things easier for the families, she thought, and perhaps for the condemned guys as well. “We try to do something for them, make them feel human,” she explains.

The men are on lockdown 24-7, with little outside contact: “It’s a little bit like a time warp.”

Many of the men, Branca says, have been on death row 20 years or more, and the conditions are horrific. Neither facility has air conditioning, for instance, and one has a tin roof, so prisoners bake during the summer. The men live in lockdown 24-7, with little outside contact for years on end. “It’s a little bit like a time warp,” she explains. Their mental health deteriorates as a result: Some of the men, Branca says, are “just downright crazy” and not getting treatment; in some cases, she says, it’s the living conditions making them crazy.

It doesn’t help that many of the men feel like they are in a semi-permanent limbo, in part because so many have had ineffectual lawyers or don’t have any lawyers at all to keep them apprised of the status of their appeals. That’s why helping families visit is so important, she says.

Although she wanted to focus on visitors’ needs, the pace of executions has forced her to expand the scope of her Facebook page with news about lethal-injection disputes, death penalty politics, and calls for letter-writing campaigns asking for clemency. Occasionally there’s news from someone who was exonerated. (Florida holds the nation’s record—24—for the number of death row inmates set free.) Because family members often know little about the status of their relatives’ cases or timelines for execution, Branca posted a running list of inmates whose appeals have been denied at least through the 11th Circuit Court of Appeals. People also wanted to know when protest vigils were scheduled, so she posts that, too.

But Branca leaves news about specific prisoners off the page unless a death warrant has been signed, signaling an impending execution, or following an execution. The first rule of curating a death row site, she explains, is to be respectful of the victims’ families. Florida also has a law barring inmates from profiting in any way from publicizing their crimes, and they have little voice, if any, on the page. (No internet on death row.)

“It isn’t a place for people to spew against these mass murders. It hurts the mothers…They’re suffering enough.”

Maintaining a Facebook page that caters to friends and relatives of murderers has its challenges. Branca spends a good part of every day dealing with trolls, who fill the wall with “bloodthirsty comments.” Death threats aren’t uncommon. “I’m constantly removing negativity from there,” she says. “It isn’t a place for people to spew against these mass murders. It hurts the mothers. These ladies don’t deserve that. They’re suffering enough.”

She recently posted a warning to the trolls:

No one takes away the fact that some crimes are horrendous and that the victims and their families are those who suffer and who are innocent in all this. They deserve justice and they deserve to find peace. But there has to be a line drawn…. If you spout hate, if you can’t find humility and respect for at least the families of men on the row, you will be banned from this page and your comment removed.

Dealing with the trolls, though, is nothing compared with dealing with all the death. Since reconnecting with her childhood friend, she has gotten to know other prisoners who were later put to death. The recent spate of executions—12 just in the past year—has been especially jarring. “A lot of the men [Rick Scott has] executed are old men who have been there for so long, they have no idea what’s going on,” Branca says. “It’s very hard to watch the state put to death someone who has been sitting in a cell for 20 years, has caused no trouble, is doing his time—who is put to death almost out of the blue.”

She aims to keep the Facebook page alive anyway. “It’s sad,” she says. “Occasionally, I’d like to say that somebody got a break, but nobody ever gets a break.”