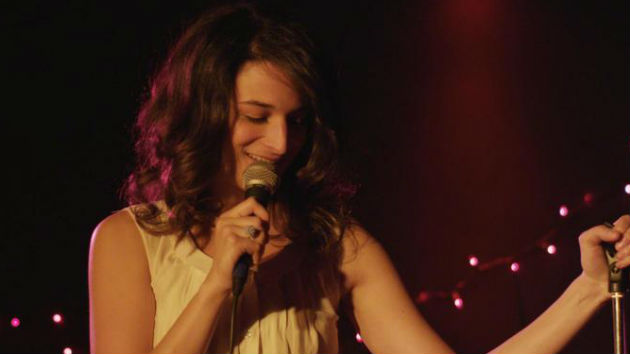 Obvious Child is being widely described as an “abortion comedy“—a catchy, if inadequate, designation. The movie (directed and co-written by Gillian Robespierre, and starring Saturday Night Live alum Jenny Slate) does involve abortion and funny jokes, many of which are about abortion and farting, among other topics. But Obvious Child is much more than the “abortion comedy” designation might lead you to believe.

“We were confident that our take on this story was thoughtful, and heartfelt, and that the comedy was funny and not for shock value,” Slate tells Mother Jones.

The film follows New York-based comedian Donna Stern (played by Slate) who, after losing both her day job and her unfaithful boyfriend, engages in what she thinks is just a one-night stand—which leads to an unwanted pregnancy. She decides to have an abortion at Planned Parenthood, and she schedules it for Valentine’s Day. The result is a witty, honest, and affecting romantic comedy that addresses a charged issue with unexpected clarity. The Huffington Post called it, “the year’s most revolutionary film.”

Obvious Child does not push a political agenda, but there is little chance of that stopping anyone who is paid to be upset by this sort of thing from, well, being upset by it. “Has Hollywood hit a new low?” the Daily Caller asked. “Here’s a new oxymoron, even for the liberal media: abortion comedy,” NewsBusters decried. “Apparently nothing sounds funnier than an unplanned one-night stand and a courageous destruction of God’s most beautiful and most innocent creation,” Brent Bozell wrote at Townhall.com.

The film premiered in New York last week, and is getting a slow theatrical roll-out elsewhere starting this Friday. As it garners more attention, it’ll likely piss off more people. Fortunately, this doesn’t seem to be much of a concern for Robespierre or Slate. “Whatever other conversation occurs, we’re really excited,” Robespierre says. “[Conservatives bashing Obvious Child] haven’t seen the movie; they’re basing it on articles and trailers.”

On the other side of the reproductive-rights debate, people are certainly enjoying, and endorsing, the film. “Honest portrayals about abortion in film and television are extremely rare, and that’s part of a much bigger lack of honest depictions of women’s lives, health, and sexuality,” Cecile Richards, president of Planned Parenthood Federation of America, said in a statement. “This film is a major breakthrough—not just because it shows a woman deciding to have an abortion but because it shows her as a full and complete person making the serious decision to end a pregnancy and still having a full and fun life.”

Planned Parenthood also consulted on the development and production of Obvious Child, vetting the script and allowing them to shoot in a clinic in New Rochelle, New York. “They were so supportive, a real friend of the film,” Robespierre says. “They read a draft of the script, they loved it, and they were so enthusiastic that we were making a movie that sort of takes away the stigma of the choice. The character is not hard on herself, and she’s not ashamed, and not judgmental. And it’s a positive, safe procedure.” Planned Parenthood then offered a few notes on the screenplay (what a nurse at one of their clinics would say to a patient, for instance). A few Planned Parenthood employees can be seen in the film as extras. “They were big fans of Jenny,” Robespierre recalls.

“We don’t describe our film as an ‘abortion comedy’; I don’t think that’s a thing, you know?”

Robespierre became a big fan of Jenny after she saw her perform stand-up in Brooklyn in 2009, at a bar behind a record store. “We finished the script but hadn’t cast the role of Donna yet, and there she was, blowing us away with this confessional style of comedy,” Robespierre says. “She was talking about when she was a little girl she would hump furniture in her house.” The pair then made a 2009 short film, also called Obvious Child, which then became the feature they’re promoting today.

“We don’t describe our film as an ‘abortion comedy’; I don’t think that’s a thing, you know?” Slate says. “I understand that it’s something that might draw readers. But for us, it’s the funny, and heartwarming, and new story of one woman at this time in her life.”