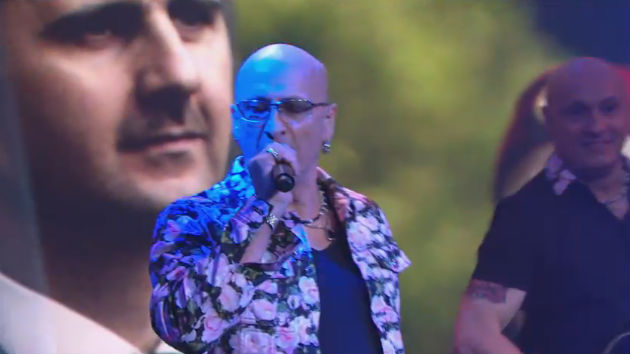 Host John Oliver ended his latest episode with a segment on the brutality of Syrian president Bashar al-Assad’s regime. Oliver also pointed out that the the dictator’s iTunes downloads includes pop music by artists such as LMFAO and Right Said Fred. “So we’re dealing with someone with the political instincts of a young Joseph Stalin, and the music tastes of a 14-year-old girl from Orange County named Tiffany,” Oliver said.

In the interest of finding something Assad enjoys and turning it against him—as something of a protest song—Oliver brought out Right Said Fred (formed by brothers Fred and Richard Fairbrass) to play an anti-Assad cover of their hit track. Instead of the lyric, “I’m too sexy for my shirt,” Assad gets, “You’re too awful for this Earth,” and lyrics asking him to “stop downloading our tracks.” Richard, the lead vocalist, is also critical of Assad’s appearance, and sings that he should be tried as a war criminal.

“We loved [this] idea,” guitarist Fred Fairbrass tells Mother Jones. “They approached us about two weeks ago. It’s actually very old-school to take a popular song and re-write the lyrics for a current subject matter. Blues artists and folk artists used to do that a lot. I think the result was very effective and a lot of fun.”

Last Week Tonight‘s team of writers penned the new lyrics, which they then sent to the Brothers Fairbrass for approval. Here’s the clip from Sunday’s show:

As for Fred and Richard Fairbrass’ interest in the humanitarian crisis, civil war, and mass slaughter in Syria, the brothers don’t consider themselves experts on the topic, but have been following the news for the past three years. “The Assad regime is inhumane and tyrannical—the problem of course is the opposition don’t seem much better,” Fred says.

We marched in London against the Iraq War. Last week we were in Copenhagen and joined the anti-Bilderberg protesters. We tend to get most of our news info from the alternative media like James Corbett, Media Monarchy, Democracy Now!, etc. etc. We are pro-privacy and pro-minimal state intervention.

Furthermore, Right Said Fred showed up at a gay rights march in Moscow in 2007 (where Richard was physically assaulted by an anti-gay counter-protester), and their official Twitter account recently issued a brief critique of President Obama and the Bowe Bergdahl deal.

And now, here’s the original “I’m Too Sexy”: