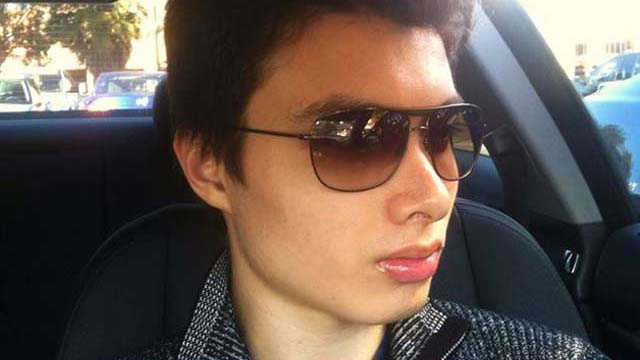 Elliot Rodger in a still from one of the videos he uploaded to YouTube.

Elliot Rodger had pondered mass murder for years before last month’s killing spree near Santa Barbara, which left seven dead and another 13 wounded. But it was a violent clash with people who snubbed him at a party 10 months earlier that convinced him to plow ahead with the plan. A police report obtained by Mother Jones through a public-records request sheds fresh light on this incident and raises new questions about how the local police handled clues that surfaced prior to Rodger’s deadly rampage, which ended with him committing suicide.

Rodger climbed onto a 10-foot ledge where he pretended to pick off party goers with an imaginary gun. He then tried to push several women off the edge.

In July 2013, Rodger, a lonely 21-year-old virgin, attended a party in Isla Vista, a seaside town that’s home to University of California, Santa Barbara. In his 141-page manifesto, Rodger recalled the outing as a “last ditch effort” to lose his virginity before turning 22. (“I was giving the female gender one last chance to provide me with the pleasures I deserved from them.”) But the girls at the party ignored him. Rodger grew livid and climbed up onto a 10-foot ledge where he pretended to pick off party goers with an imaginary gun. He then tried to push several women off the edge, but a group of men intervened and shoved him off instead.

Rodger, who broke his ankle in the fall, initially tried to flee. He later staggered back toward the party to look for his Gucci sunglasses, but he was so drunk that he got lost and ended up in another fight in front of the house next door. “They called me names like ‘faggot’ and ‘pussy’, typical things those types of scumbags would say,” he wrote in his manifesto. “A whole group of the obnoxious brutes came up and dragged me onto their driveway, pushing and hitting me.”

Rodger had already been tentatively planning his murderous attack, but the embarrassment? he endured that night galvanized him. “The highly unjust experience of being beaten and humiliated in front of everyone in Isla Vista, and their subsequent lack of concern for my well-being, was the last and final straw,” he wrote. “It was time for Retribution.” But Rodger realized that the incident on the ledge could jeopardize his plans for violent revenge by attracting police attention. In his manifesto, he called attacking the women “one of the most foolish and rash things I ever did” and expressed regret that he had “almost risked everything” by doing it. “I had to concoct a fairly altered story to explain to the police, who would inevitably have to interview me,” he wrote.

The following day, two sheriff’s deputies visited Rodger in Goleta Valley Cottage Hospital, where he was being treated for his broken ankle, and questioned him about the previous night’s altercations. According to the police report, Rodger told the officers that he had gotten into an argument with four guys and had called one of them “ugly,” after which the men pushed him off the ledge. Contrary to the account in his manifesto, Rodger claimed that he had immediately “stumbled his way into the front yard” of a nearby house, where another group of about 10 men approached him and said, “Get the fuck out of here.” He told the police these men dragged him toward the driveway, kicking and punching him. One called him “faggot.”

When the deputies asked him why he hadn’t contacted the police, Rodger replied, “I didn’t know who to call.” The officers suspected he was holding back information. “During my contact with Rodger he appeared to not be forth coming with me,” officer M. West wrote in his report. “He appeared timid and shy and would not go into great detail about what had occurred.” The officers then spoke to one of the party goers who witnessed the first altercation, a 26-year-old man named Yukito Isoda. He told a much different story. According to the police report, he recalled that Rodger was behaving strangely before the incident and “did not appear to be socializing with people at the party.” When Rodger tried to shove two women off the ledge, Isoda said he “caught one of the females who was pushed, preventing her from falling.” He also said that a second woman “fell into a cradle position to prevent herself from falling off the ledge” and that Rodger “pushed two more people before jumping off of the 10 ft. ledge and running” away.

Rodger was terrified that the police would search his room and find the guns he had been stockpiling and papers detailing his murderous plot.

The sheriff’s office ultimately concluded that Rodger had instigated the fight, after which the investigation ended. According to police records, Rodger was not arrested or interrogated further. His fear that this incident would lead police to thwart his deadly attack was never realized.

Rodger had another run in with police in April, after a family member raised concerns about YouTube videos Rodger had posted of himself talking about murder and suicide. This time when sheriff’s deputies knocked on his door, Rodger was terrified that they would search his room and find the guns he had been stockpiling and papers detailing his murderous plot. “I would have been thrown in jail, denied of the chance to exact revenge on my enemies,” he recalled in his manifesto. “I can’t imagine a hell darker than that.” But despite the previous incident, which should have alerted police to the possibility he could be violent, the deputies never watched the YouTube videos to see whether Rodger was a danger to himself or others. Nor did they run his name through California’s handgun registry, which would have shown that he had recently bought three 9 millimeter semiautomatic handguns. Instead, the officers merely questioned Rodger, who assured them that he had no intention of hurting anyone. Kelly Hoover, a spokeswoman for the sheriff’s office, maintains that they acted appropriately?. “Based on the information reviewed thus far, the Sheriff’s Office has determined that the deputies who responded to the April 30th check-the-welfare call acted in accordance with state law and department policy,” she told Mother Jones via email.

After the police visited, Rodger pulled the videos off YouTube to avoid drawing more attention to himself. “I can’t let anyone become suspicious of me,” he wrote. “All it takes is for one person to call the police and tell them that they think I’m going to perpetrate a shooting, and the police will be coming to my door again, demanding to search my room….Thankfully, all suspicion of me was dropped after I took down the videos from YouTube, and the police never came back.”

Read the full police report below.