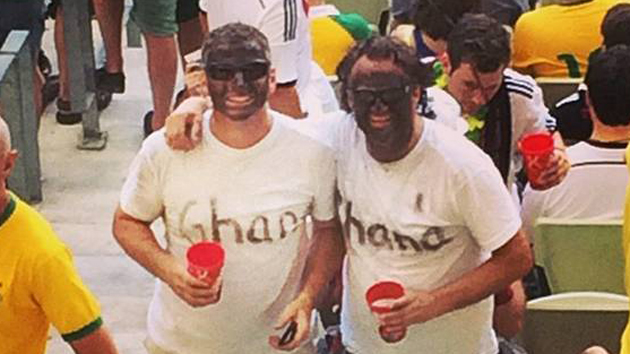 Hooligan culture has long brought out the ugliest elements of soccer fan bases. But recently the consensus is that hate speech—and even violence—have gotten worse in soccer stadiums around the world, from Europe to South America.

That’s why FIFA, international soccer’s governing body, has gone on the offensive during this year’s World Cup, slapping “Say No to Racism” patches on players’ jerseys and on signs around the pitch during matches. FIFA also has a number of tools in its arsenal to punish offending parties, from banning individual fans and fining countries to even deducting teams’ points or suspending them altogether.

Despite these efforts, racism and homophobia have emerged in the stands and on the field at this year’s World Cup in Brazil. Here’s the worst of the worst so far, and how they stack up to past misbehavior:

1. Neo-Nazis on the loose. During Saturday’s match between Germany and Ghana, a shirtless man ran on the field during the 53rd minute. On his body he’d written the symbol of the Nazi SS, as well as the letters “HH”—short for “Heil Hitler.” Shockingly, he paraded around midfield for a few moments—with no security personnel in sight—until a Ghanaian player took it upon himself to escort him away. 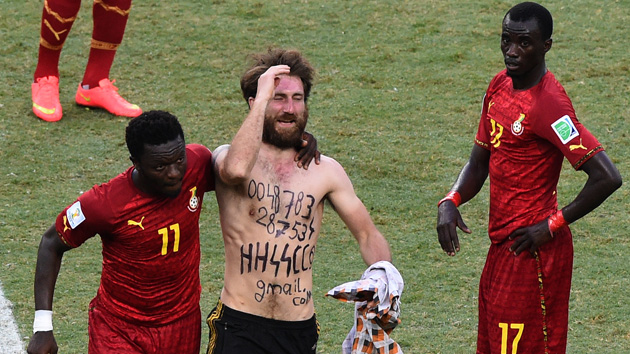 A man with Nazi-associated markings runs on the field. Marcus Brandt/DPA

It was hardly the first time neo-Nazis have used the World Cup as a platform for their views. Last week, for example, Russian and Croatian fans were spotted in the stands with banners with anti-Semitic and neo-Nazi symbols. One Croatian player, Joe Simunic, was banned from this year’s Cup after shouting slogans from Nazi-era Croatia following his side’s qualifying victory. And in 2006, English fans were arrested in Germany for displaying Nazi symbols on their bodies.

Despite FIFA’s promise to punish hate speech—and even deduct teams’ points for offenses—there’s reason to believe this isn’t the last incident of this kind. Anti-Semitism and racism are on the rise in many parts of Europe and in its soccer stadiums; in particular, the 2018 World Cup host, Russia, has a disturbing trend of violent neo-Nazism and racism (and, as Mother Jones has reported, homophobia). Some players have already called for a boycott.

2. Blackface and yelling “monkey.” Also at Saturday’s Germany-Ghana match, German fans were seen wearing blackface and Afro wigs, happily taking pictures with other fans. While it’s unclear how many there were, an Instagram user posted a picture of two and said he’d counted eight Germans in blackface at the stadium.

FIFA is currently investigating, and despite its tough talk on racism, it’s unclear how the issue will be handled. Like the United States, Germany has a history of whites putting on black makeup—particularly in theater—and some Germans still consider the practice acceptable.

At the 2012 Euro Cup, Dutch players were harassed by fans and Italian player Mario Balotelli was verbally abused; at the 2006 World Cup, Spanish fans allegedly taunted black French players during an elimination match.

Even the World Cup’s tremendously diverse host country has been waging a high-profile battle with its own racial tensions, which sometimes manifest themselves at soccer games. Arouca, a former Brazilian national player, was taunted several months ago in Rio de Janeiro by fans repeatedly chanting “monkey” at him, along with other nasty slurs. Brazilian President Dilma Rousseff tweeted her disapproval after the incident, writing, “It is unacceptable that Brazil, the country with the largest black population after Nigeria, has racism issues.”

Rousseff also pledged a “World Cup without racism,” which would certainly be an accomplishment for an international soccer competition. At the 2012 Euro Cup, Dutch players were harassed by fans and Italian player Mario Balotelli was verbally abused; at the 2006 World Cup, Spanish fans allegedly taunted French players during an elimination match; and in the 1970s and 1980s, racist taunting was so common in soccer stadiums in Europe that it was hardly newsworthy at all.

3. Mexico’s popular homophobic chant. Mexican fans have brought the infamous “¡EHHH…PUTO!” chant, reliably shouted during goal and corner kicks, to the World Cup. “Puto” is historically an offensive slur for gay men, and when Mexican fans shouted it during their side’s match against Cameroon, FIFA promised an investigation, which could’ve resulted in a fine for the Mexican soccer federation.

On Monday, FIFA concluded that the chant “is not considered insulting in this specific context” and refrained from issuing any kind of punishment. Anti-racism activist group Football Against Racism in Europe condemned FIFA’s lack of action, stating, “If the decision is that the use of the word ‘puto’ is not homophobic then this [is] disappointing and contradicts the expert advice of the Mexican government’s own anti-discrimination body, CONAPRED, and numerous other experts.” (Last week, CONAPRED denounced the chant, saying that it “reflects the homophobia, machismo, and misogyny that still exists in our culture.”) Mexican soccer officials have been mostly silent, but coach Miguel Herrera defended the chant’s use, calling it “not that bad.”