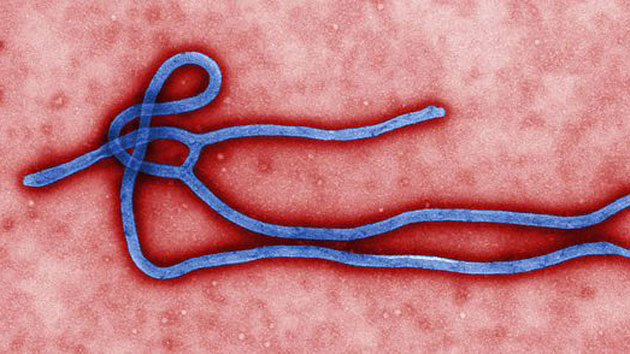 Two US aid workers in Liberia recently became the latest victims of an Ebola epidemic that health experts are calling “out of control” and the deadliest outbreak of the virus in history. The disease has a high fatality rate. There have been over 1,000 suspected and confirmed cases across Guinea, Liberia, Nigeria, and Sierra Leone since March, and over 660 people have died. Health workers are having trouble aiding victims, the New York Times reports, due to being shut out by fearful communities. Here’s what you need to know about this outbreak.

When and where did it start?

On March 25, 2014, the Centers for Disease Control and Prevention (CDC) announced that 86 suspected cases of Ebola had been reported to the World Health Organization across four southeastern districts in Guinea. At that time, cases were also being investigated in Liberia and Sierra Leone. By April 1, Liberia was reporting eight suspected cases and two deaths. On May 26, a case of Ebola was confirmed in Sierra Leone. Since then, the disease has continued to spread across the region. Guinea has had the highest suspected death toll so far, with 314 fatal cases as of July 20. 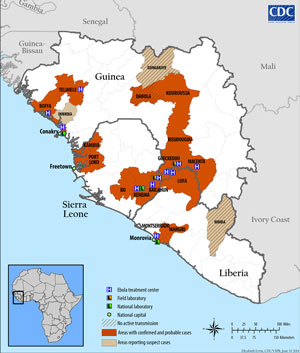 Have there been Ebola outbreaks of this size before?

No, health workers are reporting that this is the deadliest. According to data compiled by the BBC and the World Health Organization, the outbreak that comes closest occurred in 1976, when over 400 people died. Many of those cases occurred in then-Zaire (now Democratic Republic of Congo) cropping up near the Ebola river (for which the disease is named). Since then, there have been several outbreaks across Africa, but none of this scale.

How does Ebola spread?

Ebola can infect humans and animals, and spreads through bodily fluids. Scientists believe that fruit bats are the natural carriers of the virus. According to the World Health Organization, African pig farms often play host to bats, allowing the disease to spread from the bats to pork. Eating “bushmeat“—or the meat from wild animals, such as gorillas, monkeys, or bats—can put you at risk for exposure. Recently, the government of the Cote d’Ivoire (otherwise known as Ivory Coast)—which borders two of the countries enduing the outbreak—prohibited the sale of bush meat. But the government does not have the means to enforce the ban, and it’s still easy to come by. Funerals for victims of Ebola can also be a source of transmission, with friends and family members potentially coming into contact with the blood and other fluids of the deceased. (Within some African cultures, mourners hug and kiss the bodies, making exposure even more likely.) 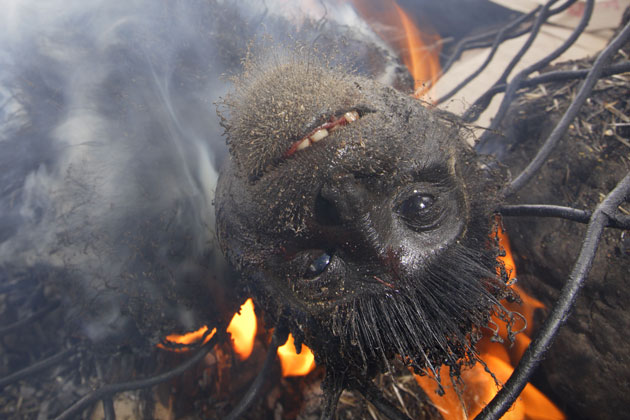 A monkey head roasts at a Gabon market. Butchering and eating wild primates is one way that Ebola has spread in Africa. David Maitland/Zuma Press

How fatal is Ebola?

One of the problems with treating the virus is that in its earliest stages it mimics a number of other diseases endemic to Africa. Usually within eight to 10 days of infection, according to the CDC, patients experience a fever, a headache, and muscle fatigue. Some people get better, but most—up to 90 percent—get worse. In a victim’s last days, he or she will begin to hemorrhage blood, internally and externally, as the disease lays waste to internal organs. There are no drugs approved for treating Ebola. For the infected, the only hope is that the virus will pass. According to the CDC, the only treatments available fall under the category of “supportive therapy“—providing patients with water, maintaining blood pressure, and treating for complicating infections—with the hope that a patient’s immune system can fight off the virus. Lab researchers have had some luck using drug cocktails to block the disease in animals shortly after exposure, but they haven’t yet tested these treatments on humans.

How easily is Ebola transmitted?

Doctors Without Borders calls Ebola “highly infectious,” and medical staff treating patients must wear full protective suits to avoid contracting the disease themselves. The Ebola virus is so contagious that researchers can only work with it in specially outfitted labs that boast the highest levels of biocontainment. However, David Heymann, professor of infectious disease epidemiology at the London School of Hygiene and Tropical Medicine, tells CNN that Ebola can be controlled when the right precautions are taken: “It’s not rocket science to control these outbreaks but instead basic epidemiology: infection control, hygiene practices, contact-tracing, and safe burial practices.”

Is there a vaccine?

There’s no vaccine for Ebola. What is so vexing for researchers is that the virus keeps emerging in new forms. Scientists can’t predict what form the virus will take when it strikes next; a vaccine would have to inoculate a person against all of the variants. But Ebola is adaptive and hard to pin down. Even if a vaccine were developed, researchers worry the virus could adapt and overcome it.

Why are health workers having trouble containing the virus this time?

Marc Poncin, the emergency coordinator in Guinea for Doctors Without Borders, told the New York Times that “we’re not stopping the epidemic.” According to health officials, locals are fearful of aid workers and are threatening violence against them to keep them from entering communities and monitoring the virus, providing supportive therapy, and isolating patients. This has led to difficulties in placing victims into quarantine. In Sierra Leone, for example, the family of a woman who had tested positive for Ebola removed her from the hospital so she could be treated using traditional medicine. The woman has since died. 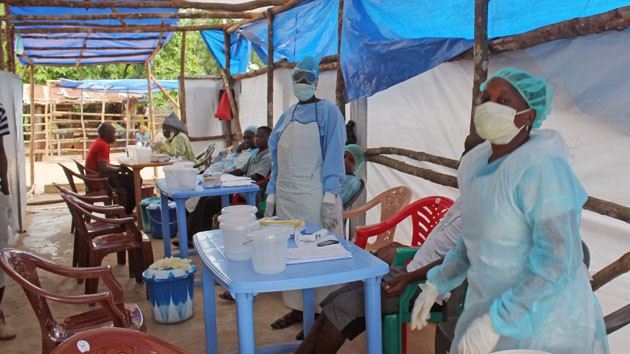 Where is the virus headed next?

Nigeria is the latest country to report a case of Ebola, with an infected man dying there after arriving from Liberia. (On Sunday, Liberia closed most of its borders.) Nigeria is taking preemptive steps to stop the spread of the virus, including shutting down the hospital where the man died, monitoring people who were on his plane, and putting border checkpoints on high alert.

How dangerous would Ebola be if it arrived in the United States?

Not as dangerous. Dr. Jonathan Epstein, a veterinary epidemiologist and Ebola expert with EcoHealth Alliance, recently told Mother Jones that infections likely wouldn’t be widespread in the United States, because it has better systems in place for controlling outbreaks.

UPDATE 1, Thursday, July 31: The Centers for Disease Control and Prevention has upgraded its alert level for countries afflicted by the Ebola outbreak, urging all US residents to “avoid nonessential travel” to Guinea, Liberia, and Sierra Leone. Additionally, the condition of an American, Nancy Writebol, who contracted the disease in Liberia, is reportedly worsening. According to the Christian mission organization she is serving with, she is receiving an experimental drug treatment.

UPDATE 2, Monday, August 4: A desperate bid to save the lives of two American missionary workers infected with Ebola in Liberia may have worked, according to CNN. Both patients’ conditions improved “significantly” after receiving the drug, according to CNN. Now one is at Emory Hospital in Atlanta and the other is expected to arrive to Atlanta tomorrow. The treatment was developed by the San Diego-based pharmaceutical company Mapp Bio. Mapp Bio was one of three pharmaceutical companies awarded a $28 million grant in March from the National Institutes of Health to develop a drug cocktail to combat Ebola.

The missionaries may not be the only Ebola patients in the United States. New York’s Mount Sinai Hospital announced today that it was testing one of its own patients for the virus. The patient, who had earlier traveled to one of the countries currently enduring the outbreak, came to the emergency room early today with a fever and intestinal problems— symptoms associated with Ebola. He is now being quarantined at Mount Sinai. The White House also announced today that it was sending more CDC experts to the region.

UPDATE 3, Tuesday, August 5: On Monday, Rep. Todd Rokita (R-Ind.) suggested that migrant children who are being sent to sponsors in Indiana might be infected with Ebola. “We need to know just from a public-health standpoint, with Ebola circulating and everything else,” he told WIBC’s “The Garrison Show.” Rokita is not the first GOPer to make this bizarre claim, Rep. Phil Gingrey (R-Ga.) has done so as well. There are currently no documented cases of Ebola in Central America.