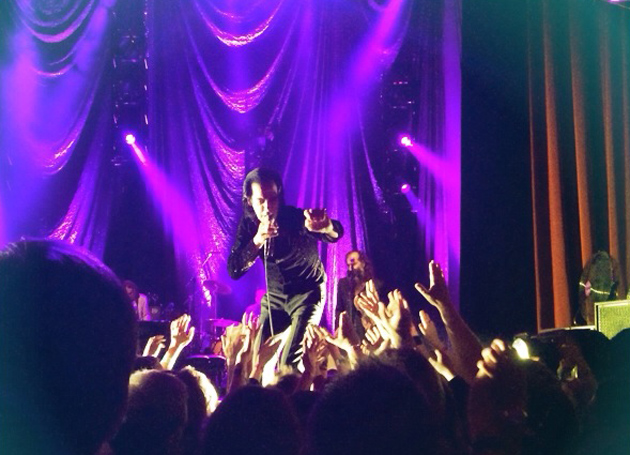 Most concert reviews are ponderous, so I’ll keep this one short: The quirky, passionate Australian musician Nick Cave, who was profiled in Sunday’s New York Times Magazine if you care to read up on his latest doings, basically just renewed my faith in rock and roll—a concept that this scrawny, sexy, histrionic, 56-year-old love child of David Bowie and Tom Waits and something much darker more or less embodies.

Regardless of whether you’ve kept up with his oeuvre (I certainly haven’t) or can even name any Nick Cave songs, he’s a fabulous performer whom you need to see before you die—or before he does. Last night, during his second sold-out evening at San Francisco’s Warfield Theater, the audience was smitten as Cave bounced around the stage like a gothic scarecrow, styled out in his signature dark suit and black velvet, taking full advantage of his rich voice and theatrical tendencies.

Reaching into the front rows, and occasionally throwing himself halfway down into them, Cave connects intimately and powerfully with his audience, leavening lyrical intensity with dark humor: Within the twisted landscape of “Higgs Boson Blues,” Cave croons: “If I die tonight, bury me / In my favorite yellow patent leather shoes / With a mummified cat and a cone-like hat / That the caliphate forced on the Jews.” On the contemporary track “We Real Cool,” he sings, “Wikipedia is heaven / When you don’t want to remember no more.” And if you’ve never heard Cave’s unique take on “Stack-O-Lee” or “Stagger Lee” (or however you choose to write the name of the old murder ballad), well, yeah. It’s not much like the other hundred versions you might have heard.

Cave’s talented band, the Bad Seeds, is a marvelous cast of characters to boot, especially the guy I’m calling the Mad Fiddler (and flautist, guitar, keyboard, and mandolin player). All wild hair and long, scraggly half-gray beard, he attacks his violin like some deranged fiddler on the roof. Together the Bad Seeds highlight Cave’s quieter moments with subtlety, exploding with their bandleader when the time is right into mad catharsis. Rock and fucking roll at its finest. Tour dates are here.