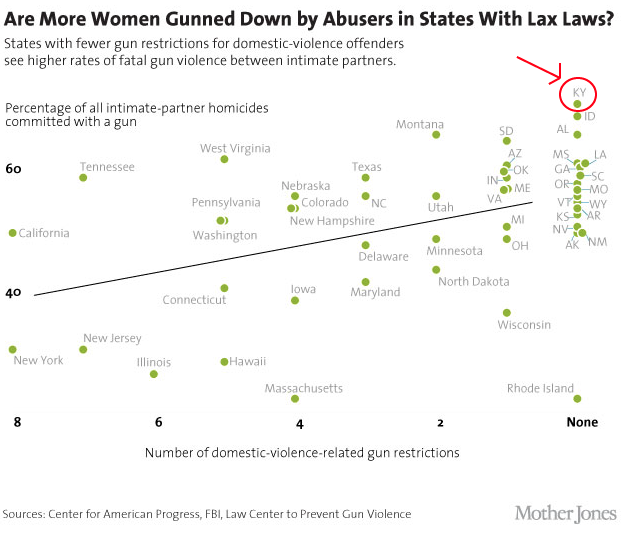 This week, a Kentucky law kicks in that aims to protect domestic violence victims—not by taking away guns from their abusers, but by making it easier for victims to carry guns.

Kentucky has some of the most lax gun restrictions for domestic violence perps in the nation, and between 2003 and 2012, a greater percentage of intimate-partner homicides in Kentucky were committed with guns than anywhere else in the country. A number of states prohibit certain domestic abusers from possessing guns with laws that bar convicted stalkers, people subject to temporary restraining orders, or dating partners convicted of domestic violence from owning guns. Kentucky does none of that. For the chart above, Mother Jones looked at eight gun restrictions related to domestic violence that states have enacted; Kentucky had zero. (In the chart, Kentucky is in the upper right-hand corner.)

The new Kentucky law, which passed with overwhelming bipartisan support, doesn’t stop abusers from possessing a firearm. But it makes it easier for victims to carry a weapon. Under the law, anyone granted an emergency protective order or who obtains a domestic violence order can apply for a permit to carry a concealed weapon, temporarily waiving the requirement to complete firearms training. (The person still has to complete a background check.) This means a victim (or someone threatened with domestic violence) can obtain a concealed carry permit in as little as 24 hours. 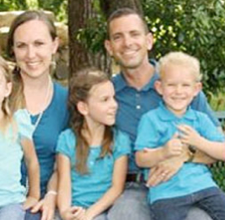 Here’s how that might play out in real life. Last year, Alisha Waters obtained an emergency protective order in Kentucky against her estranged husband, who was allegedly stalking her. Under Kentucky law, an emergency protective order does not bar the target of the order from possessing or purchasing firearms. (A new federal bill seeks to change that.) Her husband came to her workplace in Fort Thomas and shot her multiple times with a legally-obtained gun—rendering her a quadriplegic—before killing himself.

If the new Kentucky law had been in place, Waters’ husband would still have been allowed to purchase guns. But Waters would have been able to get an expedited concealed carry permit. She spoke to WLWT News 5 on Tuesday about the law, noting, “I don’t know that it’s a good idea.”

The new law is based on an argument long pushed by gun rights advocates: women are safer when they are toting guns. But researchers have questioned this notion. A study published in the Annals of Emergency Medicine found that 20 percent of women killed in California were murdered by an intimate partner using a gun. But among the female victims who had purchased handguns, that number jumped to 45 percent.

“In America, on average, 46 women are shot to death by a current or former husband or boyfriend each month,” says Stacey Radnor, a spokesperson for Everytown for Gun Safety. “This latest move in Kentucky is a distraction from what we should really be focusing on: saving women’s lives by keeping guns out of the hands of domestic abusers.”