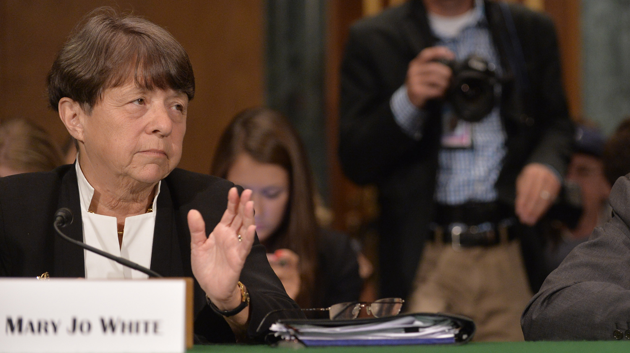 “You don’t want to mess with Mary Jo.”

That’s just a sampling of the many compliments paid to former Wall Street defense lawyer Mary Jo White in January 2013, when President Barack Obama nominated her to run the Securities and Exchange Commission (SEC), a major banking watchdog. But after more than a year in charge, White hasn’t lived up to the hype, instead crafting weak regulations, delaying new rules to rein in the industry, and granting special privileges to a bank involved in fraud.

White has made some aggressive moves—she slapped more than 60 penalties on financial firms for violations including insider trading and refusals to cooperate with investigations. Last year, she announced that the SEC will start to force more bad-behaving banks into admissions of wrongdoing instead of allowing firms to just settle without admitting or denying guilt. But overall, White has not been the hard-nosed, take-no-prisoners reformer Obama and his fellow Democrats promised. Here are five reasons why:

Rule-making is slow as molasses: Cracking down on individual banks is important, but in order to prevent another financial crisis, the SEC needs to address broader problems in the financial system. The commission is supposed to do that by crafting provisions of the 2010 Dodd-Frank financial reform law into scores of enforceable rules. White promised she would prioritize finishing up these regs, but rule-making at the SEC has slowed to a crawl since she took the helm of the agency. Over the past year, White has pushed back expected completion dates on 64 percent of rules. Contrast this with the progress made by the Commodity Futures Trading Commission (CFTC), another federal Wall Street regulator with similar jurisdiction, which has finished writing nearly all of its Dodd-Frank rules.

“We should’ve gotten a lot of these rules done already,” an SEC official told the Financial Times in May. “By delaying and delaying, someone else is winning and it’s not the people fighting for reform.”

Republican obstruction isn’t to blame. There are five commissioners at the SEC who vote to approve new regulations. Three of them, including White, are Democrats. That means White should be able to easily secure a majority of votes in order to finish up all those rules. That she hasn’t done so suggests she doesn’t want to, financial reformers argue. When she was confirmed to head the SEC, White said she would make sure Dodd-Frank regulations didn’t impose “unnecessary burdens” on financial firms. Last July, former CFTC chair Gary Gensler told Bloomberg that White and Treasury Secretary Jack Lew seemed more like banking lobbyists than federal regulators when they met with him to talk about how banking rules should apply to US firms’ overseas branches.

Rules that the SEC has finalized are full of loopholes: The few regulations that the SEC has completed over the past year are “weak,” says Marcus Stanley, the policy director at Americans for Financial Reform. A measure the SEC finalized about a year ago, for example, makes it easier for start-ups to go public, but it does not contain enough protections for investors, Stanley says. And reformers say that a rule the SEC finished up last fall, which was supposed to curb abuses in certain parts of the bond market, has a number of crucial loopholes.

Regulations in the works are toothless, too: The rules the SEC is still hammering out are also disappointing, progressives say. A measure the SEC started working on before White’s time, for instance, is supposed to ensure that credit rating agencies—companies that rate financial firms’ ability to pay back debt—stop the sloppy ratings practices that led to the financial crisis. Reform advocates say White could improve the “ineffective” rule before the commission votes on it, but she hasn’t made a move to do that. The SEC is also considering adding new exemptions to an already weak proposed rule governing certain types of mutual funds.

White voted to give special privileges to a bank accused of fraud: In another business-friendly move in April, White voted with the two Republicans at the SEC to give special benefits to the Royal Bank of Scotland (RBS), despite the fact that the bank recently plead guilty in connection with an interest rate-rigging scandal. The SEC allowed RBS to raise money by offering securities without waiting for approval from the agency, even though companies that break the law are supposed to be denied this benefit. Democratic commissioner Kara Stein slammed the decision, noting that “we repeatedly relieve [firms] of the supposedly automatic consequences of their misconduct.”

An SEC official maintains that the SEC “continues to vigorously pursue all aspects of its mission,” and notes that the agency has completed several rules, including the massive Volcker rule, which limits the risky trading by commercial banks that helped lead to the financial crisis.