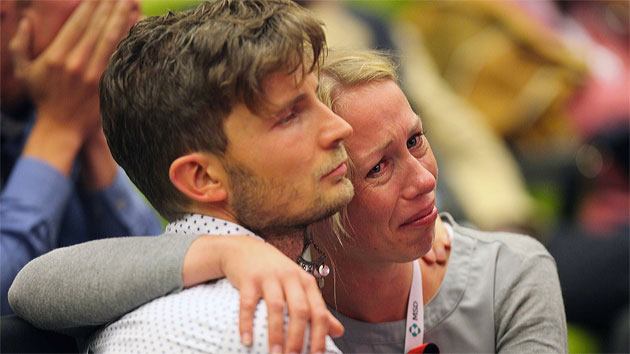 Conventioners react at a silent tribute during the opening of the 20th International AIDS Conference at the Melbourne Convention and Exhibition Centre. Xu Yanyan/Xinhua/ZUMA Wire

As news broke last Thursday that Malaysia Airlines Flight 17 was shot down over separatist-controlled eastern Ukraine, it quickly became known that top-level AIDS researchers and activists were among the dead. Initially it was reported as 100 or more, but that number has now been debunked. At least six are confirmed dead, including the celebrated Dutch AIDS researcher Dr. Joep Lange, 59, who was en route to the world’s largest AIDS conference, held this year in Melbourne, Australia. All 298 people on board the flight from Amsterdam to Kuala Lumpur were killed.

Sunday night’s opening ceremony of the 20th International AIDS Conference, a biennial gathering run by the International Aids Society (IAS), was used to pay tribute to the six colleagues, who were honored as some of the brightest minds in the field of HIV research and activism.

“I think it was a touching opening ceremony,” Craig McClure, UNICEF’s top HIV/AIDS advocate told me. “I think for most of us, we’re sill in a state of shock.”

McClure was close friends with Dr. Lange, a former IAS president and world-renowned professor of medicine in Amsterdam, as well as Lange’s partner, Jacqueline van Tongeren, who worked at the Amsterdam Institute for Global Health and Development. Both were killed in the attack.

“Joep was really a giant in HIV research,” McClure said. Lange “changed the face of the epidemic”, he said, through his pioneering early work on combination antiretroviral trials that led to a crucial, and hard-won, advancement in the fight against AIDS. Antiretroviral therapy consists of the combination of at least three drugs that act in concert to suppress the HIV virus, slowing its replication in a patient’s body. Deployed in the mid-1990s, this treatment allowed an HIV diagnosis to be viewed as something other than an automatic death sentence.

“His contribution there in the early years was phenomenal,” a clearly emotional McClure told me when I reached him by phone as the conference’s formal schedule kicked off earlier today (Australian time). “But he was also very involved in the early years of work on prevention of mother-to-child transmission, and the role antiretrovirals play there, and pediatric treatment.”

“With the same passion, caring, and love that we have always drawn upon to adjust to this epidemic, we will adjust to the challenges of managing the loss of the people on that flight.”

“But he didn’t stop there,” McClure said. Lange would have continued to play a major role in going “that final mile” to end the epidemic in the next decade or so, he said, highlighting Lange’s energetic ability to work across varying fields of policy, medicine, and politics to hammer out responses to the spread of the disease, especially in poor countries.

McClure himself was appointed Executive Director of the International Aids Society in 2004 by Lange when he was president of the organization. “We were very, very close friends,” he said. Of Lange’s partner Jacqueline van Tongeren, McClure added, “They were very much in love. She was as dedicated to the HIV response as he was. It’s a very personal loss.”

Early reports that around 100 delegates were lost aboard MH17—repeated by President Obama on Friday—now appear to have been wrong. IAS has confirmed the names of six advocates who had been scheduled to attend the conference, but said that the number may increase with new information.

“The number that we have confirmed through our contacts with authorities in Australia, in Malaysia, and Dutch authorities as well, is six people,” said IAS president Françoise Barré-Sinoussi. “It may be a little bit more, but not the numbers that have been announced.”

In addition to Lange and van Tongeren, IAS confirmed the deaths of Pim de Kuijer, an AIDS campaigner for Stop Aids Now!; Martine de Schutter, a program manager at the same organization; Lucie van Mens, director of support at the Female Health Company; and Glenn Thomas, a former BBC journalist and spokesman for the World Health Organization.

McClure said it was important the conference go ahead to honor these six lost colleagues. “This community, we’ve lost 35 million people in the last 30 years to AIDS, so we know what it means to lose friends, to lose patients, to lose family members,” he said. “So this is not the first loss, and one of the things that has come together over the years is our collective sense of loss and our anger at the epidemic, and the loss of Joep and Jacqueline and the others on that plane just brings us together again and reminds us of why we’re doing this work, and gives us again that sense of solidarity.”

IAS president Barré-Sinoussi urged delegates to honor their memory by redoubling efforts to fight AIDS. “I strongly believe that all of us being here for the next week to discuss and learn is indeed what our colleagues who are no longer here with us would have wanted,” she said.

Ken Legins, who works with McClure as a senior advisor to UNICEF on HIV among children and adolescents, said Tuesday’s scheduled candle-light vigil in Melbourne’s Federation Square will incorporate memories of those lost aboard MH17, with memories of those taken by AIDS in the last two years. “We’re used to remembering people that die of AIDS, and now I’m going to remember people because they’re shot out of the sky. It just seems unfair but it’s a community that’s used to dealing with things that are unfair,” Legins said.

“With the same passion, caring, and love that we have always drawn upon to adjust to this epidemic, we will adjust to the challenges of managing the loss of the people on that flight,” he said. “I really think you’ll see recovery. But that’s not to say that people are not greatly affected by what happened, it’s just fucking unbelievable.”