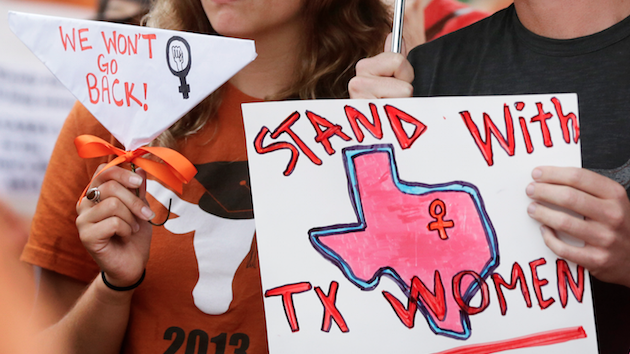 Texas lawmakers have already walloped abortion access with 24-hour mandatory waiting periods and onerous rules that shut down almost half of the state’s clinics. But one anti-abortion lawmaker is gearing up for more. Although the legislature isn’t in session this year, state Sen. Ed Lucio (D) is promising to introduce a bill for 2015 that would force women to undergo an hour-long adoption seminar before obtaining an abortion.

Lucio declined through a spokesman to be interviewed for this article. But a similar bill he offered in 2013 provides clues about the forthcoming legislation. That bill instructed the Texas Health and Human Services Commission to create an educational course about adoption of up to three hours. Women would have to take the course, for free, online or in person, and submit a “certificate of completion” to the physician performing the abortion. The bill contained an exception for women who have become pregnant as the result of rape or incest or who required an abortion for medical reasons.

“It is my hope that, when presented with more information on adoption resources and services available, more pregnancies can be carried to term,” Lucio told the San Antonio Express-News a year ago.

Lucio isn’t the only anti-abortion legislator with his sight set on 2015. In terms of abortion politics, 2014 has been relatively quiet, especially compared with 2011 and 2013—two record–breaking years for the number of anti-abortion bills introduced in state legislatures. That’s largely because some state legislatures that produce a steady stream of anti-abortion legislation haven’t been in session, says Elizabeth Nash, the state issues manager for the pro-abortion rights Guttmacher Institute. In 2015, Nash says, Texas and North Dakota lawmakers go back to work, and there will be no federal elections competing for attention—meaning the number of anti-abortion bills will likely rise again.

In fact, the only reason Lucio’s original bill didn’t pass in 2013 may be that he introduced it in the waning days of a special session that Gov. Rick Perry (R) convened to pass another anti-abortion bill. That one required abortion providers to have admitting privileges with a local hospital. Despite Sen. Wendy Davis (D)’s infamous filibuster, that law passed. Lucio can file a new bill on or after November 10 for consideration next year.

In Ohio, the state’s Right to Life President Mike Gonidakis has promised a “rather large and robust” slate of anti-abortion laws next year. Without providing details, Gonidakis told the Columbus Dispatch that his group is prepared to supply five or six bills to anti-abortion lawmakers. In Iowa, lawmakers next year are expected to consider a bill that bans physicians from giving instructions on abortion-inducing drugs by webcam or phone.

Iowa has more than a dozen clinics that provide “telemedicine” abortions—procedures in which patients use medication at home and receive advice on how to do so from supervising doctors via phone calls or video chats. In ten states where lawmakers have passed similar bans since 2011, telemedicine abortions were already illegal, thanks to other anti-abortion laws. Perhaps it’s a sign: 2015 could turn out to be another blockbuster year for anti-abortion laws—but abortion foes might be running out of things to ban.