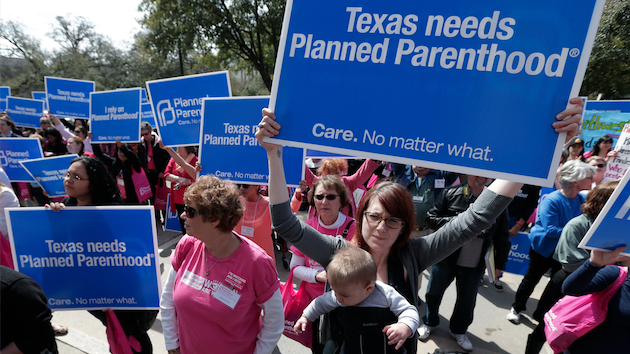 Last Friday marked one year since Texas Gov. Rick Perry (R) signed into law one of the nation’s harshest abortion restrictions. The law, which state Sen. Wendy Davis (D) famously denounced during an 11-hour filibuster, imposes onerous restrictions on abortion clinics that are designed to shut them down. A year later, it has profoundly limited abortion access for Texas women: When Perry held his signing ceremony last July, Texas had 40 licensed abortion clinics. Today, only 21 are still providing abortions. By September, when a section of the law requiring abortion clinics to meet the same standards as ambulatory surgical centers takes effect, there may be only six.

The first wave of clinics closed or stopped providing abortions due to a provision of the law that came into force in November 2013 and required abortion providers to have admitting privileges at a hospital within 30 miles.

You can see women’s abortion access trickle away in the interactive map above. Some things to note: Before the state required admitting privileges, 13 cities had abortion clinics. Now, just seven do. After September, only five Texas cities—Dallas, Forth Worth, San Antonio, Austin, and Houston—will will have abortion clinics. Women in the Rio Grande Valley must now travel to Corpus Christi, a two-and-a-half hour drive, for abortion services. Soon, there won’t be a single clinic providing abortions west of San Antonio. A clinic in Dallas that will operate as an ambulatory surgical center opened after the state’s new law passed and does not initially appear on the map.

In addition to making it harder for abortion providers to operate, the law also bans abortion 20 weeks after conception and restricts the use of medication to terminate pregnancies. At the time of its passage, anti-abortion lawmakers claimed that tougher requirements for abortion providers were necessary to safeguard women. But mainstream medical groups, such as the American College of Obstetricians and Gynecologists, argue that requiring admitting privileges doesn’t increase the level of care. Transfer agreements with hospitals offer patients the same protection in the rare cases when an abortion requires hospitalization. Plus, abortion foes have made it highly controversial for hospitals to grant abortion providers admitting privileges. In April, for example, two Texas providers claimed in a lawsuit that a Dallas hospital withdrew their admitting privileges because associating with them ginned up negative publicity.

The restrictions that go into effect on September 1, mandating that clinics meet the standards of ambulatory surgical centers, are even more cumbersome. For an abortion clinic to meet this requirement, it must have the ability to administer general anesthesia and its doorways and hallways must be a certain width. These requirements aren’t medically necessary for an abortion, and they cost a lot of money to implement. One of the few abortion clinics in Texas that qualifies as an ambulatory surgical center, for example, costs at least $40,000 per month more to operate than an average clinic, according to the New York Times.

Reports of the law’s aftermath show that Texas women who have lost access to abortion clinics and medication have been traveling to Mexico or turning to the black market to obtain abortion-inducing drugs.

The Fifth Circuit Court of Appeals upheld the law in April, and abortion rights supporters have promised to appeal to the US Supreme Court. Meanwhile, the trend in Texas is playing out elsewhere in the country, where states continue to pass similar measures, known as TRAP (Targeted Regulation of Abortion Providers) laws. The American Civil Liberties Union is currently fighting in court to invalidate Texas-like laws enacted in Alabama, Indiana, Mississippi, and Wisconsin. And more TRAP laws are set to take effect: in Louisiana, Republican Gov. Bobby Jindal signed one into law in June.