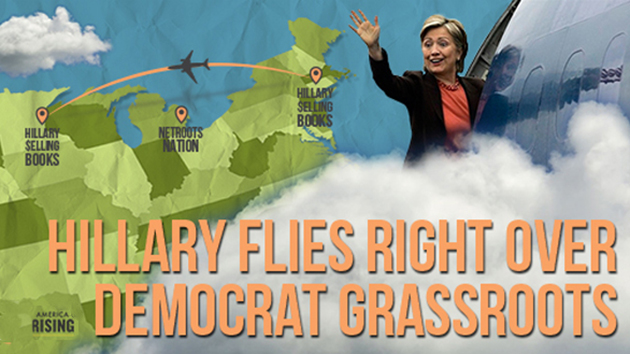 When Hillary Clinton declined to attend the annual Netroots Nation conference in July, the most vocal outcry came not from the progressive base, but from a Republican super-PAC founded by former staffers for Mitt Romney and the Republican National Committee. “Despite flying over Detroit, MI – the home of Netroots Nation 2014 – Hillary Clinton will not strategize with Democratic activists at the United States’ ‘largest progressive gathering’ this weekend,” the group wrote on its website. “Instead, she will be traveling from Connecticut to Minnesota in order to $ell her book.” That condemnation was paired with a meme-ified graphic of Clinton waving goodbye to the “grassroots” as she flew by.

Officially, Hillary Clinton is still a private citizen contemplating a possible 2016 presidential campaign. But everyone else in the political world is treating her as if she were a formal candidate. A slew of right-wing books targeting Clinton have been published this summer. And a bevy of Democratic super PACs have sprung into existence to defend Clinton and expand her base of support. “I’ve been amazed at what a cottage industry it is… If it all stopped, a lot of people would lose their jobs,” Clinton said recently on the Daily Show of the hype machine that revolves around her potential candidacy.

Unlike during her 2008 presidential campaign, the progressive critique of Clinton has been tepid so far. On the left, there’s really no counterweight to the newest branches of the Clinton machine. Massachusetts Gov. Deval Patrick’s remark that he does “worry about the inevitability thing” is about the most damning Democratic criticism you hear against Clinton these days. Sure, there’s a new group agitating for Sen. Elizabeth Warren to run in 2016, but all the big money on the left has turned to helping out Hillary. Clinton has often had an uneasy relationship with the progressive flank of the Democratic Party—during the 2008 election there was plenty of Hillary trashing throughout the primaries. But, at least so far, Democrats have been held their fire.

With the absence of lefty criticism of Hillary this time around, America Rising is trying to fill the void. It launched a “Stop Hillary 2016” project and website last summer. (If you donate $5 to the PAC they’ll send you a Stop Hillary bumper sticker.) And the group released an e-book titled Failed Choices to counter Clinton’s State Department memoir. Some of its anti-Clinton material rests on retreading the predictable conservative tropes on Benghazi.

But the super PAC hasn’t confined itself to the sort of attacks you would expect from an opposition research shop manned by GOPers. “Our view is that she can’t be allowed to have a free pass,” says Tim Miller, the group’s executive director and a former spokesman for the RNC. “And right now the entire Democratic establishment—from John Podesta to Jim Messina to Randi Weingarten to Emily’s List’s Stephanie Schriock—are all anointing Hillary the 2016 nominee, so we see it as part of our job to make sure that her real record is being publicized, regardless of the issue or the ideological perspective on it.”

The group seems to be going out of its way to stir up trouble for Hillary within the Democrats’ lefty base. America Rising has highlighted Clinton’s past support for the Iraq War and called her out for continuing contracts with Blackwater when she was at the State Department. The weekend of Netroots Nation, the PAC made a video that spliced together a clip of Elizabeth Warren denouncing lobbyists with an old video of Clinton defending her decision to accept donations from lobbyists, a clear appeal to the liberals who might be wary of Clinton’s campaign finance record.

The group’s greatest concern trolling coup came in June, after Clinton was interviewed by NPR’s Terry Gross. Before the interview had aired on most stations, America Rising had already clipped a seven-and-a-half minute segment during which Clinton grew defensive when Gross questioned her over her shifting views on same-sex marriage. Media outlets immediately picked up on America Rising’s framing of the interview, including liberal media outlets that would traditionally defend Clinton against conservative attacks.

Miller is unabashed about the intentions of America Rising; it’s not just a conservative organization, but a Republican super PAC. But despite that affiliation, he doesn’t find it weird to be the one behind the occasional bit of liberal prodding. “I think that a big vulnerability for Hillary Clinton throughout her entire career is that she has come off as disingenuous, and come off as overly political, and we see our job as exposing that,” Miller says. “So when she is going to either move to the left to try to appease these liberal voters who might be upset about certain things in her record, or pivot to the right to prepare for a general election, that’s something we’re going to talk about.” Until another Democrat steps up and decides to challenge Clinton for the presidential nomination, America Rising won’t have much competition.