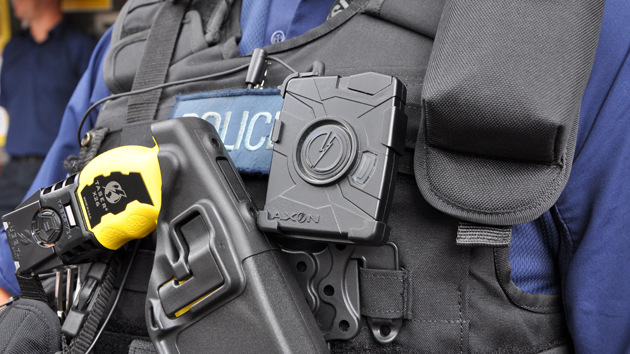 On Tuesday, the City of Ferguson announced what seemed like a no-brainer: It would look into getting dashboard-mounted and wearable cameras for its police officers. The pledge—part of a litany of promises aimed to help the community “feel more connected to and demonstrate the transparency of city departments”—is really only a “commitment to raise funds.” It’s unclear what that means, exactly. Mayor James Knowles didn’t respond to questions asking for specifics.

The concept seems simple enough, though. A petition asking for a “Mike Brown Law” that would require all state, county, and local police to wear cameras has gotten more than 123,000 signatures, and lots of stories have come out in recent days discussing cameras as a solution to the mysteries of cases such Brown’s recent killing by a Ferguson cop. Last August, a federal judge called for the NYPD to wear such cameras when she ruled that the department’s stop-and-frisk policy violated people’s constitutional rights.

But putting aside the fact that footage from a dashboard or chest-worn camera may not have negated what we’re seeing in Ferguson—where racial tension has been brewing for years, the result of a variety of factors—deploying such cameras isn’t necessarily the straightforward fix some observers make it out to be.

“Independent research on body-worn camera technology is urgently needed,” wrote Michael White, a professor at Arizona State University and the author of a Justice Department-commissioned report on body-worn technology studies published earlier this year. “Most of the claims made by advocates and critics of the technology remain untested.”

“I think body cameras are definitely a net good,” says David Harris, a law professor and police behavior expert at the University of Pittsburgh. “They are one of the most prominent technologies to come along in a long time in terms of accountability, evidence gathering, [and] in terms of, frankly, changing behavior on either side of the camera. Nothing is a silver bullet, but this has the potential to be a substantial advance.”

Harris, who consults for law enforcement agencies on the side, points to a study by police in Rialto, California. After introducing body-worn video cameras in February 2012, that department reported an 88 percent reduction over the previous year in complaints against officers—and the use of force by its officers fell by nearly 60 percent. A separate British study of one small police department looked at data collected in 2005 and 2006 and found a 14 percent drop in citizen complaints in the six months after cameras were introduced compared to same six-month period of the previous year.

White’s paper concludes, however, that the data on why such drops occur is far from conclusive. In addition, police forces looking to adopt the technology must wade through a maze of legal, ethical, and resource issues before deploying it widely. For instance, a dozen states require two-party consent for recording oral communications. In those places, police would likely need a legislative exemption or other workaround to use the devices.

In specific cases, the cameras can provide valuable insights, Harris notes. Consider this video of a homeless man killed by Albuquerque police in March. (The officers were never charged.)

“In situations like that, the evidence is really, really strong,” Harris says. “It won’t do that in every case, and one camera doesn’t necessarily give you an unbiased picture. But boy, it tells us a lot of things we don’t know when cameras aren’t there.” It’s worth noting that the release of the Albuquerque video may be the exception rather than the rule: Police can claim that such videos are not part of the public record (as they have in San Diego), or, due to the nature of the footage, never release them publicly.

The technology, moreover, isn’t worth much if a police officer fails to use it. That’s what happened on August 11, two days after Michael Brown was shot. A New Orleans cop shot another unarmed black man while trying to take him into custody. Armand Bennet, 26, had a bullet graze his forehead deep enough that it landed him in intensive care for four days and required staples to treat, according to his attorney, Nandi Campbell.

The officer, Lisa Lewis, had apparently shut off her camera prior to the encounter. Lewis’ attorney says it was because her shift was about to end. “Her shift ended at 2 [a.m.] and this happened at 1:15,” counters Campbell, who adds that the conflicting accounts of the shooting—Bennet and his brother claim that Lewis shot at Bennet a second time as he tried to flee—differed greatly. “This is a discrepancy that could be alleviated by her activating her body camera,” Campbell says.

“Everybody has recording ability…and they’re going to be asking when a case gets to the jury, ‘Where’s the recording?'”

As it stands, according to the Bureau of Justice Statistics, at least 60 percent of local police departments use dashboard cameras. It’s unclear exactly how many use wearable ones. “I can’t quantify it, and wouldn’t try,” Harris said. “We’re just at the beginning stage. This is technology that’s really in its infancy as far as adoption.” Wearable cameras—ranging in price from about $100 to $1,000—are cheaper than their dashboard-mounted cousins, which can cost several thousand dollars each. In addition to the Rialto Police, departments in Arizona, California, Colorado, and New Mexico—not to mention Los Angeles, New Orleans, New York City, and Washington, DC, are using or testing the systems.

Harris recommends that departments using the technology require its use with all citizen interactions. If the camera isn’t used, there had better be a good reason, such as technical failure or a situation in which the officer has to react too fast to turn it on. “If neither is the case, a good excuse or a technological breakdown, then you have a presumption that what the officer says should be viewed skeptically, and the presumption that [the suspect] is telling the truth,” he says.

Harris adds that it’s only a matter of time before these things are everywhere; he estimates about five years. “I think this will become standard,” he says. “Everybody has recording ability in their phones, they record things all the time, and they’re going to be asking when a case gets to the jury, ‘Where’s the recording?'”