In 2007, Jeffrey Scudder, a veteran information technology specialist at the Central Intelligence Agency, came across the archives of the agency’s in-house magazine, Studies in Intelligence. The catch: They were classified. So Scudder filed a Freedom of Information Act request. And then things got messy. “I submitted a FOIA and it basically destroyed my entire career,” he told the Washington Post.

As a profile of Scudder in the Post explains:

He was confronted by supervisors and accused of mishandling classified information while assembling his FOIA request. His house was raided by the FBI and his family’s computers seized. Stripped of his job and his security clearance, Scudder said he agreed to retire last year after being told that if he refused, he risked losing much of his pension.

Now, in response to a lawsuit filed by Scudder, the CIA has declassified and released some of the hundreds of journal articles he’s requested. Nearly 250 of them have been posted on the CIA’s website. Published over four decades, they offer a fascinating peek at the history of US intelligence as well as the corporate culture of “the Company.”

Here are 10 that grabbed our attention:

1. “How We Are Perceived”: “It came as a shock to learn that there seem still to be large numbers of well read and presumably intelligent US citizens who perceive that we are assassins, blackmailers, exploiters of sex and illicit drugs as well as the creators of our own foreign policy separate and distinct from that of the Department of State,” a clandestine service member wrote in this essay from the winter of 1986. “How can it be that perceptions differ so radically from reality?”

Answer: Leaks to the press “together with some of our acknowledged missteps” had fed a trail of Soviet propaganda, which misinformed the American public. Even the State Department and military intelligence harbored “misperceptions” about the work of the CIA, the author continued, listing a half-page of apparent myths—which has not yet been declassified. “We have the option of keeping mum and allowing the misperceptions to grow, or of tackling them head-on. We have only ourselves to blame if we do nothing to set the record straight.”

2. “11 September 2001: With the President”: President George W. Bush’s CIA briefer, Michael J. Morrell, recalls the events of 9/11, which he witnessed as part of the executive entourage:

The president asked me who was responsible for the attacks. I said “Sir, I haven’t seen any intelligence that would point to responsibility, so what I’m going to say is simply my personal view.” The president told me he understood. I said two terrorist states were capable of conducting such a complex operation [REDACTED] I pointed out [REDACTED]; that neither had much to gain and both had plenty to lose from attacking the United States. Rather, I said the culprit was almost certainly a nonstate actor, adding that I had no doubt that the trail would lead to the doorstep of Bin Laden and al-Qa’ida.

3. “Leo Theremin—CIA Nemesis”: Best known as the inventor of the eponymous instrument used to make UFO noises in B-movies, inventor Leo Theremin was also a Soviet spy. The “Russian Thomas Edison” survived the gulag to become a KGB researcher whose “very existence was a state secret.” His biggest coup: Placing an ingenious bug inside a wooden replica of the Great Seal of the United States that was given to the American ambassador in Moscow in 1945. The hidden microphone was not found until 1960.

Not available on newstands: The CIA’s Studies in Intelligence CIA

4. “An Interview With NSA Director Lt. Gen. Michael V. Haydem”: In this prescient Q&A from the pre-9/11 and pre-Snowden era, the then-NSA director and future CIA director spoke about his agency’s reputation for excessive secrecy:

Everything’s secret. I mean, I got an e-mail saying, “Merry Christmas.” It carried a Top Secret NSA classification marking. The easy option is to classify everything. This is an Agency that for most of its existence was well served by not having a public image. When the nation felt its existence was threatened, it was willing to cut agencies like NSA quite a bit of slack. But as that threat perception decreases, there is a natural tendency to say, “Now, tell me again what those guys do?” And, therefore, the absence of a public image seems to be less useful today than it was 25 years ago. I don’t think we can survive without a public image.

Asked about cooperation between intelligence agencies, Hayden’s answer foreshadowed the intelligence failures behind 9/11 and the coming hunt for Osama bin Laden:

Without getting too much into some really sensitive stuff, let’s think about conducting operations against a major international terrorist leader…Think about two agencies, for illustrative purposes, 35 miles apart, trying to marry the data to get the son of a gun. And each of them saying, “I’ll give you my finished reporting, but not my tickets.” You cannot tell me that’s the correct approach in the first year of the 21st century. We’re like two foreign potentates, negotiating a transfer of prisoners, and we’re both wrapping ourselves around our own tradecraft.

5. “Interview with Erna Flegel”: In 1981, future CIA chief Richard Helms spoke with a nurse who was stationed in Adolf Hitler’s Berlin bunker as Nazi Germany collapsed in 1945. About her former employer, whom she was a “fanatical admirer,” Flegel gushed, “When Hitler was in the room, he filled it entirely with his personality—you saw only him, aside from him nothing else existed. The fascinating thing about him was his eyes; up to the end, it was impossible to turn away from his eyes.” 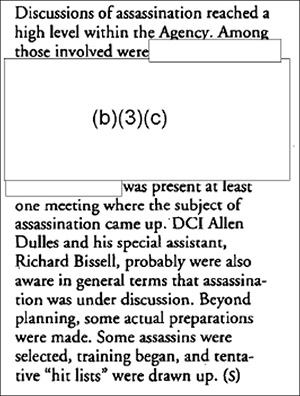 A redacted passage in an article about assassination planning in Guatemala. CIA

6. “CIA and the Guatemala Assassination Proposals, 1952-1954”: As this heavily-redacted article explains, later reviews of CIA activities in Guatemala in the 1950s turned up documents that had not been disclosed during earlier investigations into CIA assassination plots. What was in those rediscovered files? For example, while it was plotting the overthrow of “Communist” Jacobo Arbenz:

Discussions of assassination reached a high level within the Agency. Among those involved were [REDACTED] was present at least one meeting where the subject of assassination came up. DCI Allen Dulles and his special assistant, Richard Bissell, probably were also aware in general terms that assassination was under discussion. Beyond planning, some actual preparations were made. Some assassins were selected, training began, and tentative “hit lists” were drawn up.

“Yet,” the article asserted, “no covert action plan involving assassinations of Guatemalans was ever approved or implemented.”

7. “Interrogation of an Alleged CIA Agent”: This 1983 paper opens with the transcript of the questioning of a suspected American operative by a particularly indefatigable interrogator known as A.I.:

A.l.: Do you work for the American Central Intelligence Agency, Joe?
Hardesty: Hell, no.
A.l.: Why do you persist in lying to me?
Hardesty: I am not lying. You have no right to treat me like this.
A.l.: Of course not.
Hardesty: Since you agree with me, may I go?
A.l.: So you are not lying … interesting.
Hardesty: May I go now?
A.l.: Who are your superiors at the CIA?
Hardesty: I don’t know what you are talking about.
A.l.: You had better think about that statement before I make a record of it.
Hardesty: Go to hell.
A.l.: Why so hostile?

A.I. is short for Artificial Intelligence. The exchange actually took place between a human and a computer, indicating the agency’s early interest in the kind of sophisticated computer learning that’s since become increasingly commonplace.

8. “Managing a Nightmare: CIA Public Affairs and the Drug Conspiracy Story [REDACTED]”: This undated release, apparently from the late ’90s, takes on the PR disaster spawned by San Jose Mercury-News reporter Gary Webb, who had accused the CIA of importing drugs into the United States in the ’80s. Webb’s claims were “alarming,” and the agency was particularly stung by the allegation that it had worked to destroy the black community with illegal drugs. Fortunately, the Studies in Intelligence article explains, “a ground base of already productive relations with journalists” helped “prevent this story from becoming an unmitigated disaster.” Hostile reporters attacked Webb’s work and he eventually became a persona non grata in the newspaper world.

Ultimately, claims the article, part of the problem with the response to Webb’s stories was a “societal shortcoming”: “The CIA-drug story says a lot more about American society…that [sic] it does about either CIA or the media. We live in somewhat coarse and emotional times—when large numbers of Americans do not adhere to the same standards of logic, evidence, or even civil discourse as those practiced by members of the CIA community.” In 1998, the agency partly vindicated Webb’s reporting by admitting that it had had business relationships with major drug dealers. Jeremy Renner stars as the late Webb in a new movie, Kill the Messenger.

9. “The Evolution of US Government Restrictions on Using and Exporting Encryption Technologies”: During the Clinton administration, the government was powerless to stop the development of open-source encryption tools. This Studies in Intelligence article details the many failed official attempts to control the development and proliferation of encryption tools. In the face of opposition from researchers, the business community, and its own experts, the government eventually eased restrictions on the technology. But, as the author noted, spooks yearned for the golden age of electronic eavesdropping: “The US Government, and NSA in particular, would like to return to the Cold War era of complete government control over strong cryptography and skillful manipulation of the research and corporate communities.”

10. Par-Faits (And Other Faits): In 1984, a Mr. [REDACTED] compiled quotations from Performance Appraisal Reports (PARs) over the years along with introductory quips. The subjects and supervisors quoted are also, mercifully, anonymous.

Almost flawless—so to speak: “His English is flawless, if not close to it.”
The clairvoyant case officer: ” … His operational reporting is often on time, often ahead of time.”
His eyes are clear but his prose is measured and smoke-watered: “With the perspective of twenty months of overview of his long march, rather than with the smoke-watered eyes of those who peer too closely into his campfire, I conclude that his pace has been measured.”
The hyperactive dog of a case officer: “…He is a man of constant motion—some of it unnecessary…he bloodhounds even the longest odds and opportunities.”
Although some may wonder: “All said and done, Mr. S. is human.”