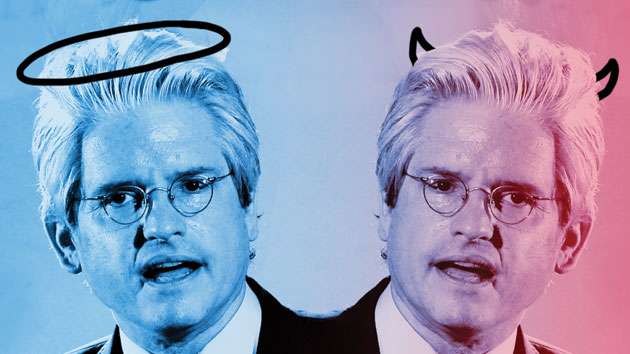 A week after Hillary Clinton released her new memoir, Hard Choices, I met Burns Strider for lunch at the Hotel Monaco in Washington, DC. Just as the book hit the shelves, Strider’s organization, Correct the Record, had released 11 pages of bullet points swatting down anticipated criticisms from Clinton’s detractors (“Hard Choices is just another way for Hillary to make money hand over fist”; “Hard Choices is a glossed-over snooze-fest”). It was the kind of preemptive spin that Correct the Record was created to churn out. As Clinton prepares for a possible presidential run, Correct the Record keeps constant watch for any conceivable attacks against her, and then aggressively beats them back before they take hold.

As he picked at his beet and greens salad, Strider told me how he’d ditched eating animal products in 2010 at the behest of the then-secretary of state. “You’ve got to think about your two boys,” she told Strider, who had worked as her senior adviser on faith outreach during the 2008 campaign. That night he got a call from Bill Clinton, who extolled the virtues of his new animal-free diet: “If I can do it, you can.” A few days later Strider received a box of herbivore-themed books and handwritten recipes jotted down by the former president.

The contemplative 48-year-old vegan, who manages Correct the Record’s day-to-day operations, says he has no qualms about his new role in the blood sport of presidential politics. Yet his boss is an even more unlikely figure: David Brock, the former Clinton nemesis and ringleader of the “vast right-wing conspiracy” that Hillary Clinton decried in 1998.

In the mid-1990s, as a reporter at the American Spectator, Brock investigated the first couple’s involvement in the Whitewater real estate scheme and dove into the allegations that Bill had used Arkansas state troopers to facilitate his liaisons, including one with Paula Jones. (He also infamously described Anita Hill as “a little bit nutty and a little bit slutty.”) Brock later underwent a political conversion and founded Media Matters, a research shop dedicated to countering Fox News and right-wing talking points. Now he’s come full circle, launching Correct the Record to combat the resurgence of the very same narrative—the Clintons are venal, opportunistic pols who will do anything to attain power—that he once worked so hard to popularize.

Brock’s ideological shift came in the late ’90s as he penned The Seduction of Hillary Rodham, a book that everyone expected to be a withering takedown—but ended up being a tepid biography. By 1997 Brock began to recant, publishing a mea culpa in Esquire titled “Confessions of a Right-Wing Hit Man.” In 2002, he released Blinded by the Right: The Conscience of an Ex-Conservative, a tell-all about the faults of the conservative movement and his disillusionment with it.

Brock “finds all of these nerd virgins and locks them away in a vault where they never see sunlight. But God bless them!”

Strider recalls picking up a copy in an airport bookstore and devouring it. He passed it along to his then-boss, Rep. Nancy Pelosi (D-Calif.), and arranged for Brock to address House Democrats. Meanwhile, Bill Clinton had started passing copies along to friends, opening new doors for Brock among liberal insiders. Having turned his back on his old right-wing patrons, Brock proved skilled at convincing rich liberals to open their wallets by revealing inside details of the conservative propaganda machine.

Brock says he first conceived of Correct the Record last summer. “Having left the State Department,” Brock told me, “Clinton didn’t have the kind of robust operation that one would have if one was holding public office. That’s where I saw the need.” He wrote a memo predicting “an uptick in political attacks” against Clinton and proposed a rapid-response group to defend her. As it happened, the very next day America Rising, an opposition research outfit founded by former Mitt Romney and Republican National Committee staff, announced a “Stop Hillary 2016” initiative.

Correct the Record’s staff (18 and counting) is crammed into a newsroom-style bullpen in the back corner of the offices of American Bridge 21st Century, Brock’s super-PAC. “They’re always there; they’re working around the clock,” former Clinton White House adviser Paul Begala says of the crew. “I always tease David that he finds all of these nerd virgins and locks them away in a vault where they never see sunlight or have a drink or get laid. But God bless them!”

The team has been building an exhaustive database of factoids documenting Clinton’s career, as well as compiling opposition research on her putative opponents. With Clinton’s own press team largely silent, Correct the Record has become the go-to source for reporters seeking pro-Clinton quotes in response to Republican attacks.

Correct the Record is part of a larger shadow campaign that’s gearing up for 2016. It includes Ready for Hillary, which is collecting voter data, and Priorities USA, which is raising big money. “For the first time in my adult life, the left has their shit together,” says Begala, who relies on Correct the Record for talking points when he prepares for cable spots as a Hillary surrogate.

Hillary Clinton has always had a rocky relationship with the press, thanks in part to dealing with conservative smear artists like the young Brock. Correct the Record reflects her prickly approach to media relations. The group spent much of the early summer sending out press releases touting the sales of Clinton’s book and tweeting about stories that questioned the numbers. When New York Times columnist Maureen Dowd wrote a column about the lavish speaking fees commanded by Hillary and daughter Chelsea, Correct fired back with a dossier on Dowd, highlighting her own speaking fees.

But this strategy could backfire. Hillary has always struggled with the perception that she is inauthentic and quick to become defensive; being shielded by a group that pounces on every slight could reinforce that image.

But Strider isn’t too concerned. The Democrats failed in 2004, he explained, by not building a media operation that could respond to the Swift Boating of John Kerry. He doesn’t want Clinton to suffer from the same mistake in 2016. “One thing Nancy Pelosi has said to me is, ‘Burns, in politics, if you take a swing at somebody you can rest assured of one thing: They’re going to swing back. So why not prepare in advance?'”