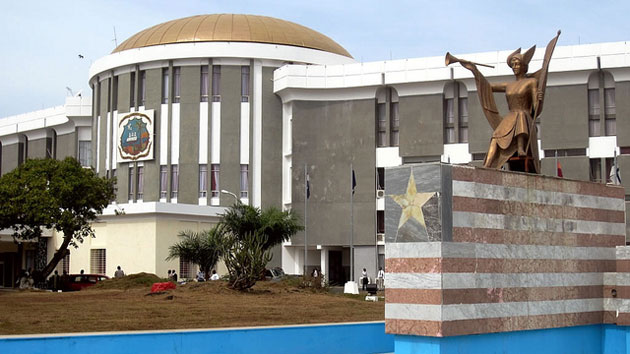 Of all the countries doing battle with Ebola, Liberia has been dealt the gravest blow. According to the World Health Organization, the impoverished West African nation now accounts for about half of all documented cases. And more than 1,200 residents are known or suspected to have died from the disease. In late August, the government quarantined an entire neighborhood for ten days to prevent the outbreak from spreading.

Now the virus is forcing Liberian lawmakers to put their own work on hold.

On Monday, Liberia’s legislature announced that the House of Representatives had canceled an “extraordinary sitting” to discuss the outbreak because its own chamber had been tainted by “a probable case of Ebola” and was being sprayed down with chlorine. The statement didn’t specify the source of the infection, but it noted that one of the chamber’s doormen had recently died after a “short illness.”

Liberia is ill-equipped to fight off the Ebola outbreak. Its entire national budget for 2013-2014 was $553 million, with only $11 million allotted for health care—about what Kanye West and Kim Kardashian are estimated to have spent on their Bel Air mansion in 2012.

Despite its meager resources, last month Liberia’s legislature allocated $20 million to battle the virus. But the nation had already burned through a quarter of that money by the first week of September. On Tuesday, United Nations officials pleaded with the international community to step up assistance to Liberia and neighboring countries, saying it will take $1 billion in aid to keep the number of cases in the region confined to the “tens of thousands.”

The White House has since taken steps in that direction. Most importantly, it announced plans to establish a US military command center in Liberia’s capital, Monrovia, to help coordinate aid distribution and medical care in the region. More than 3,000 American personnel are expected to take part in the effort, which will involve building new treatment centers in the hardest-hit areas and training up to 500 medical workers per week.

Before the recent announcement, the United States faced criticism for not doing enough to help African nations as they struggle to tamp down one of largest Ebola outbreaks in history. Last week, Liberia’s President Ellen Johnson Sirleaf sent a pleading letter to President Barack Obama. “In a country that has barely emerged from a 30-year period of civil and political unrest, with the presence of a large youthful (mainly unemployed) population, some of whom were child soldiers—this health emergency threatens civil order,” she wrote. “I am being honest with you when I say that at this rate, we will never break the transmission chain and the virus will overwhelm us.”