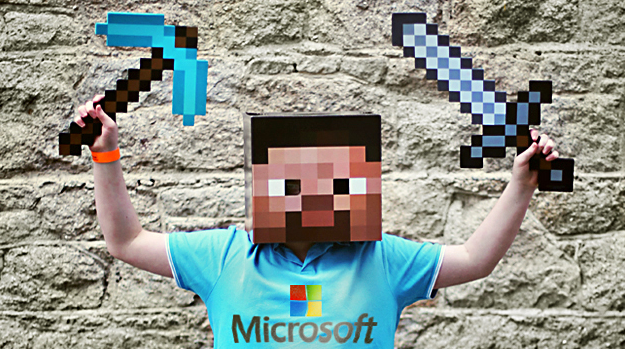 Microsoft rattled the gaming world this week when it announced it would spend $2.5 billion to acquire Minecraft, a wildly popular indie videogame. By buying the game, Microsoft hopes to tap into players’ wallets. But what’s less clear is whether Microsoft can win over gamers, some of whom are criticizing Microsoft for trying to buy its way to cool—and stifling creativity in the process.

Minecraft’s premise is simple: Players are dropped into a world with LEGO-style blocks, and can then choose their own adventures—exploring, building new structures, or fighting monsters. The game has legions of devoted followers—including hardcore gamers, elementary school kids, and United Nations staffers who have asked citizens in developing countries to use the program to design better public spaces. Some gamers are earning a living off of Minecraft by uploading game videos to YouTube and taking a chunk of the ad revenue, and they’re not shying away from slamming the deal.

This isn’t Microsoft’s first face-off with the gaming community. The company has bought a slew of gaming companies since 1999. In 2001, Microsoft acquired Ensemble Studios, which made a popular strategy game called Age of Empires. Microsoft launched an online version of the game in 2011, but couldn’t make it profitable and shut it down after less than three years. (The game’s former employees didn’t blame Microsoft.) In 2002, Microsoft acquired Rare, which gamers complained has dwindled in the years since, resulting in lay-offs at Rare this year. Because of this history, there is a sense among gamers that “Microsoft has a habit of buying companies and running them into the ground,” according to Justin McElroy, the managing editor of Polygon, a gaming site. That perception isn’t exactly accurate, McElroy says, noting that Microsoft has some games that have been huge runaway successes, like the first-person shooter Halo. But he contends that the company does tend to “stifle innovation once they purchase a company” and he is concerned that could be the case with Minecraft. “It’s really hard for Microsoft to shake the image of the Death Star gobbling up this beloved property,” he adds. “I don’t think there’s anyway to spin it. They’re walking into a minefield with Minecraft.”

Kris Graft, editor-in-chief at Gamasutra, a website on the art and business of video games, agrees, “For game developers especially, Minecraft itself is symbolic of a dream coming true. This was a game conceived by one person with a good idea, and that idea grew into a phenomenon, both culturally and financially. It was homegrown, non-corporate, and its players felt like they owned a little piece of something magical…With Microsoft’s acquisition, well, Microsoft is about as corporate as you can get.” Last February, Nat Brown, one of the founders of Microsoft’s Xbox division, accused the company of stifling independent game developers by charging them big fees to get their games featured on the Xbox. “Microsoft, you are idiotic to have ceded not just indie game developers but also a generation of loyal kids and teens,” he wrote. Microsoft has since taken additional steps to support indie developers.

Minecraft’s developer, Markus “Notch” Persson, was once a Microsoft critic. In 2012, he accused Microsoft of “trying to ruin the PC as an open platform.” (Open platforms allow independent developers to make changes to a company’s software.) “I’d rather have Minecraft not run on [Windows] 8 at all than to play along,” he tweeted. In a statement released this week, Persson said of the deal, “I don’t expect to get away from negative comments by doing this…I’m aware this goes against a lot of what I’ve said in public. I have no good response to that.”

Gamers have their own concerns. “What kind of community does Microsoft develop? None. Microsoft does not have a solid community that works together. Microsoft literally bought a community, one which they’ve never dealt with or had before,” Minecraft player “BebopVox” said in his latest “Minecraft Monday” YouTube show. (His channel has over 560,000 subscribers.) “You don’t see people creating ‘Microsoft Monday’ shows, do you? No, because that would be lame as hell,” he says.

“There are going to be changes that we cannot predict,” adds Jason, a Minecraft player who goes by the handle “Guude” and has more than 460,000 YouTube subscribers. “It is possible the community will lose that ‘soul’ that we all felt an attachment to or Microsoft could recognize what has made this game stand out.” But he’s hopeful that Microsoft will “be able to bring a lot of great things to the table from the business side of things.” Captain Sparklez, another big-name gamer with 8 million YouTube subscribers, has tweeted concerns about Microsoft’s terms of use, which say that players cannot earn money from posting game videos on YouTube. “I sincerely hope Microsoft recognizes the value of the YouTube community and that they don’t plan on tampering with it,” he says. In a statement released earlier this week, Phil Spencer, head of Microsoft’s Xbox, said, “We are going to maintain ‘Minecraft’ and its community in all the ways people love today, with a commitment to nurture and grow it long into the future.”

The bigger question, game experts say, is whether scooping up cool indie games like Minecraft will change how people view Microsoft. “Microsoft is very much trying to figure out how to stay relevant in a very different world than the company grew up in,” says Alex Howard, a columnist at TechRepublic, pointing out that the company, which still dominates desktop computers, only reaches a small percentage of mobile devices. “Here, they’re heading into online collaborative gaming, and it’s very much a bet in the foothold upon a future that’s still developing.”

For now, many in the gaming community are taking a wait-and-see approach on whether Microsoft will keep Minecraft, well…cool. McElroy says, “Purchasing Minecraft now is like going to the Beatles after they were on Ed Sullivan, five years later, and saying, ‘Hey you kids got a fresh sound, we think we could really take you someplace.’ Like, what are you doing?”