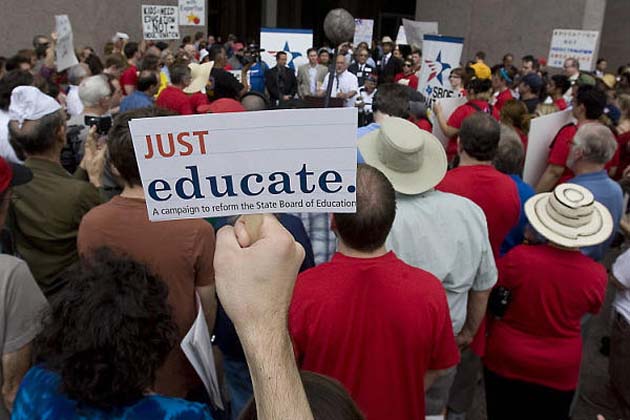 Citizens gathered outside a 2010 Texas State Board of Education meeting to protest changes to the social-studies standards. Larry Kolvoord/Austin American-Statesman/AP

The battle over Texas textbooks is raging once again. On Tuesday, hundreds of citizens turned out for the first public hearing on the controversial social-science materials now under review as part of the state’s contentious once-in-a-decade textbook adoption process. During the all-day proceedings, activists and historians pointed out numerous factual errors and complained that the books promoted tea party ideology while mocking affirmative action and downplaying the science linking human activity to climate change. “They are full of biases that are either outside the established mainstream scholarship, or just plain wrong,” Jacqueline Jones, who chairs the history department at the University of Texas-Austin, said from the podium. “It can lead to a great deal of confusion in the reader.”

Other speakers raised concerns about the treatment of religion, especially the tendency of some books to play up the role of Christianity in our nation’s founding. Kathleen Wellman, a professor of history Southern Methodist University, noted with dismay that a popular civics text was filled with references to Moses and claimed that the biblical prophet had inspired American democracy. If the draft texts are adopted as is, she argued, Texas children could grow up “believing that Moses was the first American.” Conservatives, meanwhile, complained that the books gave too much space to liberal figures such as Hillary Clinton.

It’s a high-stakes debate. Because Texas has one of the nation’s largest public school systems and some of the most rigid textbook requirements, publishers have traditionally tailored textbooks they sell nationwide to the Lone Star market.

Tuesday’s hearing comes on the heels of several reports claiming the proposed social-science textbooks, which span grades K-12, are rife with bias and factual errors. One analysis commissioned by the Texas Freedom Network, a nonprofit watchdog that advocates church-state separation, found that some materials downplayed the hardships blacks faced under segregation and “gave nods to neo-Confederate arguments” that states’ rights rather than slavery was the driving issue behind the Civil War. The group also maintains that some books take a tea party line on issues such as taxation. As an example, TFN cites a passage in the high school American government text submitted by Pearson, the world’s largest textbook publisher:

In the words of Oliver Wendell Holmes, Jr. taxes are “what we pay for civilized society.” Society does not appear to be much more civilized today than it was when Justice Holmes made that observation in 1927. However, “what we pay” has certainly gone up.

The book makes no mention of the potential benefits of taxation, including safety net programs such as Social Security and Medicare, that have been adopted since 1927 and have slashed poverty, especially among the elderly. In another chapter, the Pearson text takes aim at affirmative action with a cartoon showing two aliens in a space ship landing on Earth. Pointing toward a man in a suit and tie, one of them exclaims: “This planet is great!—He says we qualify for affirmative action!” The only context is a caption asking readers to parse the cartoon’s meaning.

Another report, released Monday by the Oakland-based National Center for Science Education, which has previously clashed with the Board of Education over its dubious treatment of evolution, highlights a handful of “deeply concerning” passages in those social-science texts that deal with climate change. The report cites a passage in the teacher’s edition of the sixth grade World Cultures & Geography text issued by McGraw-Hill, the nation’s second largest textbook publisher:

Scientists agree that Earth’s climate is changing. They do not agree on what is causing the change. Is it just another natural warming cycle like so many cycles that have occurred in the past? Scientists who support this position cite thousands of years’ worth of natural climatic change as evidence. Or is climate change anthropogenic—caused by human activity? Scientists who support this position cite the warming effect of rapidly increasing amounts of greenhouse gases in the atmosphere.

The book goes on to quote two reports on global warming. One is from the Intergovernmental Panel on Climate Change, a global outfit comprised of climate scientists who have assembled a vast body of evidence that human beings are to blame; the other is from the Heartland Institute, a conservative think thank, which has a long history of shilling for dirty industries (including Big Oil) and has tried to undermine the science linking human activity to climate change. “Scientists who study the issue say it is impossible to tell if the recent small warming trend is  natural,” reads the Heartland passage quoted in the book. “Thousands of peer-reviewed articles point to natural sources of climate variability that could explain some or even all of the warming in the second half of the twentieth century.”

In reality, as NCSE points out, there’s no indication that climate change is a passing phase, and 97 percent of climate scientists agree that human activity is the primary driver.

Besides distorting the underlying science, NCSE’s programs and policy director Josh Rosenau says many of the 104 social-studies textbooks up from review give climate change short shrift. “In this day, social-studies education ought to include an in-depth discussion of climate change,” he told Mother Jones. “There are serious policy implications. There are cultural, geographic, and economic consequences. But if you include the topic, it becomes a flash point with conservatives on the Board of Education.”

The current crop of textbooks were written to comply with a set of standards that the Texas State Board of Education, then controlled by a group of ultra-conservatives, crafted in 2010 with input from a cadre of hand-picked “experts.” Among them were conservative culture warriors such as David Barton, a self-styled historian with deep ties to the Republican Party who argues that the principle of church-state separation is a myth. As a result, the books are required to glorify free-market capitalism, promote America’s Christian heritage, and pay tribute to conservative icons, such as Newt Gingrich and Phyllis Schlafly.

Comments from Tuesday’s hearing will be forwarded to publishers, who are allowed to make changes but tend to be wary of doing anything that will put them at odds with the board. The final vote on which books to adopt will be held November. Under a new Texas law, board members can only vote to reject books that have blatant factual errors or fail to meet at least half of the state’s requirements, meaning it may be too late to address some of the concerns raised by Texas citizens. As Republican board member Thomas Ratliff put it last week, “If there’s a complaint about the standards, that ship has sailed.”

Ratliff struck a more diplomatic note during Tuesday’s meeting. “This process is not going to be perfect,” he said. “These books are not going to be perfect from anybody’s perspective, and so what we got to do is remember these are put in the hands of hopefully trained professionals that will teach these subjects in a fair balanced and comprehensive way to get these kids ready to think for themselves.”