For the past two years, killing a wolf in Wyoming was pretty simple. In a trophy game area near the border of Yellowstone, licensed hunters were allowed to take a certain number of gray wolves. In the rest of the state, or about 80 percent of Wyoming’s land, anyone could kill a limitless number of them on sight. 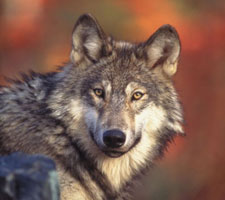 But that’s about to change. A judge ruled Tuesday that the animals’ delisting in 2012, which handed management of the species over to the Wyoming government, was “arbitrary and capricious,” and that the state isn’t ready to manage wolf populations on its own. The move has wolf activists breathing a sigh of relief; Wyoming’s management plan, as Sierra Club’s Bonnie Rice put it, could have potentially taken wolves “back to the brink of extinction.” Judge Amy Berman Jackson did not challenge the previous finding that wolves had recovered and that the species “is not endangered or threatened within a significant portion of its range.” But even so, her ruling means that Wyoming’s wolves will again enjoy protections under the Endangered Species Act and can no longer be hunted—at least in the short term.

“The court has rightly recognized the deep flaws in Wyoming’s wolf management plan.”

While as many as 2 million gray wolves once roamed North America, the carnivores were nearly wiped out by humans by the early 1900s. Roughly 5,500 remain today, though an uptick in laws permitting wolf hunting in states like Wyoming, New Mexico, Montana, and Idaho all threaten to keep the animals scarce. Wyoming’s hunting and “kill-on-sight” policies, for instance, meant 219 wolves were gunned down since 2012, according to Earthjustice.

In part because wolves were reintroduced in Wyoming, whether to kill or protect this predator remains a very polarizing issue in the state. Wolves kill farm animals and pets, pissing off ranchers and rural landowners alike and feeding into the attitude that the canids are just a deadly nuisance. A Facebook photo posted last year by hunting outfitters, for instance, shows a group of hunters posing with a dead wolf with blood covering its paws and mouth. The caption reads “Wyoming is FED up.” Commenters responded with notes like “the only good Canadian gray wolf to me is a dead Canadian gray wolf” and “Keep on killing guys!”

But scientists and conservationists have fought hard to restore this species into the North American ecosystem. Studies have shown that wolves maintain balance in the environment: they prey on other large mammals like moose and elk, whose populations (and eating habits) can get out of control without a predator to keep them in check; their hunting helps feed scavengers like wolverines, bald eagles, and mountain lions; their predation can force elk to hang out in smaller groups, thereby reducing the spread of diseases; and they’ve even been found to be good for the soil.

By restoring protections to gray wolves, states Rice in a press release, “the court has rightly recognized the deep flaws in Wyoming’s wolf management plan.” She argues that the state needs to reevaluate how it treats the animal and develop “a science-based management plan that recognizes the many benefits wolves bring to the region.”

The conservation groups that sued after the wolves were delisted in 2012 include Earthjustice, the Natural Resources Defense Council, Defenders of Wildlife, the Sierra Club, and the Center for Biological Diversity. Though yesterday’s news comes as a victory to these groups, a bigger hurdle lies ahead: The US Fish and Wildlife has proposed to remove the gray wolf from the federal Endangered Species list altogether based on the animals’ perceived recovery. A final decision is expected later this year.