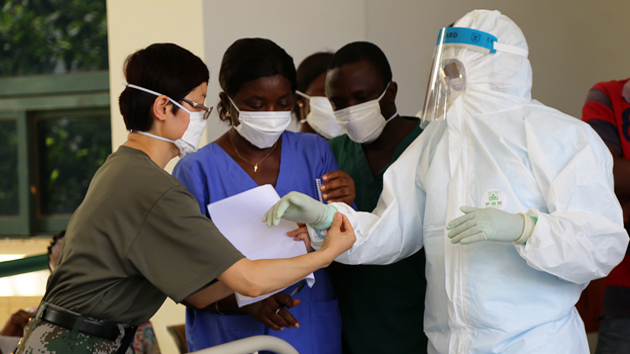 With Ebola’s arrival in the United States, some health care workers are questioning how prepared their state-of-the-art hospitals are for the disease. Despite these problems, and some serious missteps in Dallas that led to the infection of two nurses, it’s unlikely that there will be a widespread outbreak here.

But in the Ebola-ravaged countries of West Africa, where the disease has infected more than 9,900 people and killed more than 4,800, health workers are facing a much more daunting task. They aren’t simply adapting an existing health care system to deal with the crisis—in many ways, they actually have to build one from the ground up.

Sierra Leone, which has a population of 6 million, only recently emerged from a 10-year civil war and has been rebuilding ever since. From 2009 to 2013, the country spent just $96 per person on health care, according to the World Bank. (The United States spent $8,895 per person during the same period.) So when the virus struck in March, a health system that hardly existed to begin with was stretched to the point of collapse.

Dan Kelly, an American doctor with the University of California, San Francisco, has been working in Sierra Leone for eight years at a health organization called Wellbody Alliance that he co-founded. And he’s been fighting Ebola there since shortly after the start of the outbreak. In an interview with Indre Viskontas on this week’s Inquiring Minds podcast, he said that the first order of business in fighting the disease has been the creation of a “pseudo health care system” with support from international aid groups and agencies like the World Health Organization.

But that new system has to be managed by skilled health care workers—often from developed countries—and Kelly says there simply isn’t enough manpower to go around.

“The crux of this crisis is the human resource issue and staffing,” Kelly explained from Freetown, Sierra Leone’s capital. “We don’t have enough people on the ground here to mentor Sierra Leoneans to show them leadership, to accompany them on the way forward, to even provide our own expertise to manage Ebola patients and staff these treatment units.”

Kelly says that as the disease has overwhelmed efforts to control it, doctors and other health workers have been reluctant to come to West Africa to help out. As the outbreak gives way to panic, he says, some worry that border closings or other obstacles could leave them stranded. With so many cases in the region today, would-be volunteers are also fearful of being infected themselves. (On Thursday, several days after Kelly spoke to Inquiring Minds, Craig Spencer, an American doctor who had been working with Ebola patients in Guinea, was diagnosed with the disease after returning to New York.)

Kelly’s organization is teaming up with Partners In Health, an NGO that provides health care to poor people around the world, to recruit medical professionals who are willing to accept the risks of treating Ebola patients in West Africa. Potential volunteers can sign up on the recruitment page of the Partners In Health website. After an interview and training with the Centers for Disease Control and Prevention, they are sent to the Kono District of Sierra Leone or Grande Gedeh County in Liberia to help fight the disease.

“We’ve thought through, carefully, a lot of the challenges in getting staff,” Kelly says. “It’s not like I’m just sitting here saying, ‘Oh, we need staff, we need boots on the ground, we need technical expertise, but I have no idea how you’re going to get there.’ We know, it’s just that other people need to know as well.”

You can listen to the full interview with Kelly below (starting at roughly 2:40).