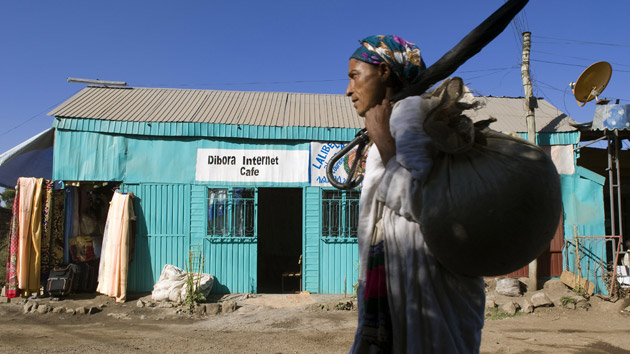 An internet cafe in Ethiopia, a nation with only 2 percent internet penetrationGuiziou Franck/AP

If you’re an American office worker who sleeps next to a smartphone and deals with an average of 120 work emails a day, life without the internet may seem like a quaint memory. But you’re actually in the minority: According to a new report, more than 60 percent of the world’s population hasn’t accessed the internet in the past 12 months. And those without access are disproportionately rural, low income, elderly, illiterate, and female.

Since 2004, 1.8 billion people have joined the online community, bringing total internet users to 2.7 billion. Even as new users continue to join the online ranks, however, the rate at which they join is slowing. The McKinsey & Company report projects that less than 1 billion additional users will be added by 2017, leaving up to 4.2 billion people—more than half the forecasted world population—on the other side of the digital divide.

The specific trends that drove people online over the past decade (such as urbanization, cheaper smartphones, and the internet’s increased utility) likely won’t be enough to push the remaining population online, thanks to barriers like low incomes and lack of infrastructure.

“Those who do not or simply cannot go online increasingly suffer from constrained prospects for economic attainment, class mobility, education, and other areas related to quality of life,” the report notes. “The voices, ideas, and contributions of the offline population can’t be heard and often can’t be made until they’re connected.”

Those left offline miss out on opportunities to connect socially, access information on everything from health to the weather, and take advantage of online government services. The internet allows communities to participate in political movements like the Arab Spring and mobilize aid following natural disasters. Online access also increases government transparency, helps shoppers save time and money, lowers the barriers of entry for businesses, and of course, provides entertainment.

Beyond individuals, whole countries are left behind: An earlier McKinsey report found that from 2006 to 2011, the internet accounted for 21 percent of GDP growth in nations with stable populations and slowing economic growth. And global connectivity can lead to improvements in technology, education, democracy, and tourism.

The disadvantages of being left behind in a digital world fall disproportionately on certain communities: A full 74 percent of today’s offline population resides in just 20 countries. Even within these nations, those who lack internet access often fit similar profiles.

Although the United States scored high on incentives and user capability, a chunk of the population remains offline due to affordability and infrastructure. Only 77 percent of US adults with household incomes below $30,000 go online, and World Economic Forum ranked the US 35th in the world in regard to internet bandwidth. Of the 50 million offline Americans, 80 percent are low income, 54 percent are seniors, and a full 66 percent are female.

The authors report that over the past decade, growth in online population has been driven by mobile coverage expansion, urbanization, cheaper phones and data plans, a growing middle class, and the internet’s increasing utility. But they caution that the remaining offline population is unlikely to be swayed by these advantages, unless the four barriers above are addressed. “Without a significant change in technology, in income growth or in the economics of access, or in policies to spur internet adoption, the rate of growth of internet penetration will continue to slow.”