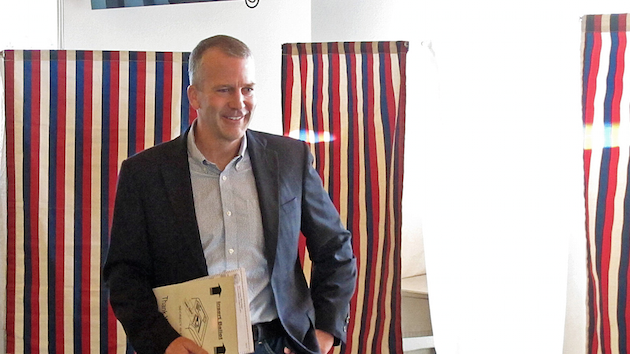 Update, Monday November 3, 4:30pm: Over the weekend, under court order, Alaska Gov. Sean Parnell released some emails requested by Alaska Public Media and Alaska Dispatch News related to the state’s National Guard sexual assault scandal. However, the emails were incomplete and some heavily redacted, leaving open the question of whether Alaska GOP Senate candidate Dan Sullivan knew of allegations of sexual assault within the Guard when he was attorney general.

Alaska GOP Senate candidate Dan Sullivan claims that he did not know about reported sexual assault within the state’s National Guard when he was the state’s attorney general until after the allegations became public. But Republican Gov. Sean Parnell won’t release the records to prove it.

In late 2010, whistle-blowers in the Alaska National Guard approached Parnell to tell him of reports of sexual assault and harassment within the guard and of allegations of financial misconduct, cover-ups, and retaliation against whistle-blowers. In recent months, Parnell, who is running for reelection, has taken fire from Democrats and the press over his mishandling of the scandal; he waited until this year to call publicly for a federal investigation into the allegations. And Sullivan—who is running to unseat Democratic Sen. Mark Begich—has been dragged into the scandal, with local reporters demanding to know how much he knew when he was attorney general about the reported wrongdoing within the guard.

Sullivan’s campaign claims that he was unaware of the allegations when he was AG, and that he only learned of them when they became public in 2013. But Parnell’s office has so far refused to release emails between the governor and Sullivan from the period when Sullivan was attorney general. There’s no telling what is in these emails. But Democrats say the withholding raises questions as to whether Sullivan, who served as AG under Parnell in 2009 and 2010, did get wind of the scandal back in 2010—and took no action.

In January, the Democratic Senatorial Campaign Committee (DSCC) requested all the emails and written correspondence between Sullivan and Parnell during Sullivan’s term as attorney general. Under Alaska law, the government is supposed to comply with records requests within 10 working days. Ten months later, the governor’s office has still not released the documents.

At the end of May, Alaska Public Media (APM), which operates public radio and TV stations in Alaska, requested correspondence—including emails, text messages, and memos—Parnell sent or received related to sexual assault within the National Guard and notes on meetings in the governor’s office on the matter. (This request was wider than the DSCC’s and did not zero in on Sullivan.) In late September, the governor’s office denied APM’s request, citing executive privilege and the right to privacy of those accused of misconduct. The rejection letter also cited victims’ privacy as a reason for not releasing the documents, even though Alaska media routinely withholds the identities of sexual assault victims. Rarely have Alaska government agencies used individual privacy concerns to justify denying entire records requests.

In early October, Alaska Public Media and Alaska Dispatch News jointly sued Parnell for the release of the records related to the guard scandal. The DSCC has filed a complaint with the Alaska ombudsman seeking immediate release of the correspondence between Sullivan and Parnell that the committee had requested in January.

Democrats say Parnell’s reluctance to release records is suspicious, and they are openly skeptical that Sullivan, as top law enforcement official in the state, didn’t know about allegations of abuse and fraud. Bruce Botelho, an Alaska Democrat who served as attorney general from 1994 to 2002, and Jim Ayers, who served as chief of staff to former Democratic Gov. Tony Knowles, say it would be highly unlikely for a governor not to consult his top lawyer about such serious allegations.

If there were no communication between Parnell and Sullivan about the matter, Ayers says, that’s an indication of “serious dysfunction” within the governor’s administration: “I can’t believe anybody in their right might would be hearing about such allegations…and not call their attorney.”

Botelho agrees: “I could not imagine if an issue of sexual abuse in the guard had come forward, and was relayed directly to the governor and his chief of staff, that one or the other would not consult with the AG.”