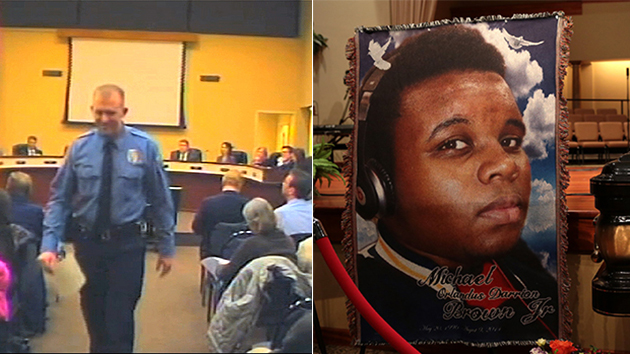 Wilson at a City Council meeting in February 2014; a photo of Michael Brown displayed at his funeral on August 25, 2014City of Ferguson/AP; Robert Cohen/St. Louis Post-Dispatch/AP

After weeks of rising tension in Ferguson and the broader St. Louis region, the St. Louis County grand jury reviewing the death of Michael Brown has decided not to indict Ferguson police officer Darren Wilson, who shot and killed Brown on August 9. Reported leaks during the grand jury proceedings suggested there would be no indictment—and that outcome fits a long-standing pattern. Few police officers who shoot and kill citizens in St. Louis have been investigated by a grand jury, let alone charged by one, according to data from city and county prosecutors.

Between 2004 and 2014, there have been 14 fatal officer-involved shootings committed by St. Louis County PD officers alone, according to police data collected by David Klinger, a criminologist at the University of Missouri-St. Louis. That does not include fatal shootings by Ferguson police or by officers from various other law enforcement agencies within the county. Many officer-involved fatalities likely were not subject to grand jury investigations because they were deemed justified by police internal affairs or the local prosecutor’s office, Klinger says. Since 2000, only four cases in all of St. Louis County, including Wilson’s, have been investigated by a grand jury, according to a spokesperson for St. Louis County prosecutor Robert McCulloch’s office. McCulloch’s office declined to provide details to Mother Jones on the three other cases, which it says are closed.

In September, Heather Cole of Missouri Lawyers Weekly used news reports to identify five grand jury investigations of officer-involved fatalities prior to Wilson’s that took place during McCulloch’s tenure, which began in 1991. As with Wilson’s case, none led to an indictment:

McCulloch’s record and family ties to the police force sparked controversy in the wake of Brown’s death.

Statistics from the City of St. Louis paint a similar picture: A total of 39 people were fatally shot by police officers between 2003 and 2012; according to the St. Louis Circuit Attorney’s office, only one police officer has been indicted in such a case since 2000, and that officer was acquitted.

Roger Goldman, an expert on criminal procedure and constitutional law at the Saint Louis University School of Law, says that a long-standing Missouri statute gives police officers wide latitude to shoot to kill. The law states they are justified in doing so if they “reasonably believe” their target “has committed or attempted to commit a felony” and deadly force is “immediately necessary to effect the arrest.” According to Goldman, the existence of this law—despite a 1985 Supreme Court ruling suggesting it may be unconstitutional—is one reason why “it’s particularly difficult to get grand juries to indict or prosecutors to even take the case to the grand jury in the first place.”

But with a case like Wilson’s, weeks of high-profile public protests likely pressured the prosecutor’s office to present a case to a grand jury, says Delores Jones-Brown, a law professor at the John Jay College of Criminal Justice. “This way the prosecutor cannot be accused of having made a unilateral biased decision.” Still, the prosecutor has a lot of sway in how a case is presented to the grand jury, she noted.

Prior to the decision in Wilson’s case, McCulloch said he would seek to release transcripts and audio from the grand jury investigation if it resulted in no indictment for Wilson. The documents have since been released.