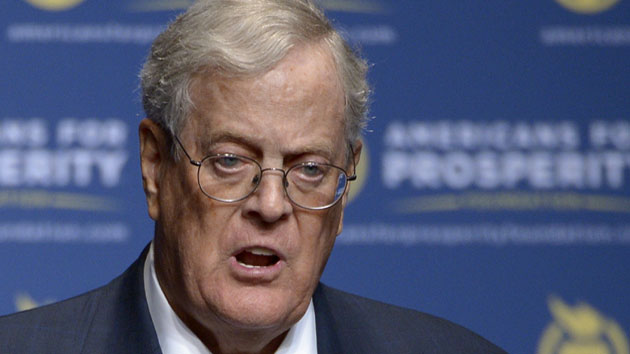 The 2014 election season acquired its fair share of nicknames: the Nothing Election, the Seinfeld Election, and the Meh Midterms. Here’s another: the Year of Koch.

Big money from outside spenders like the Koch brothers’ political network and the pro-Democratic Senate Majority PAC dominated this year’s elections. In the battleground states, a voter couldn’t watch five minutes of television, listen to the radio, or cue up a YouTube clip without being bombarded by political ads, most of them of the minor-chord, attack-ad variety. Broadcasters in Alaska, North Carolina, Colorado, and other critical states collected money by the fistful. Major candidates galore had a deep-pocketed super-PAC or a political nonprofit in his or her corner.

The price tag for 2014 will probably be the highest in American history.
Candidates, parties, PACs, super-PACs, and political nonprofits—those anonymously funded outfits including the Koch-backed Americans for Prosperity and the pro-Democratic Patriot Majority—were on pace to spend $3.67 billion on the 2014 races, according to projections by the Center for Responsive Politics. That would be a new record, surpassing the $3.63 billion spent in 2010.

When all the numbers are tallied, Republicans will likely outspend the Democrats—but not by much. CRP predicts that Republican candidates and their allies will unload $1.75 billion this election, while Democrats and their supporters will spend $1.64 billion. (The remaining dollars, according to CRP, went toward nonpartisan and third-party spending as well as overhead costs.)

Super-PACs and dark money are a bigger deal than ever.
All those attack ads clogging up the commercial breaks during your favorite show? Chances are they were funded not by a candidate but an outside group—a super-PAC, a labor union, or a political nonprofit.

The 2014 elections will be remembered as the cycle when outside groups handled much of the mudslinging, which traditionally was the responsibility of candidates and their campaigns. In Kentucky, for instance, a secretly funded group called Kentucky Opportunity Coalition ran 12,000 TV ads—many of which attacked Democratic Senate candidate Alison Lundergan Grimes, depicting her as an Obama clone. The group’s commercials accounted for one out of every seven ads run during that race, according to the Center for Public Integrity. On paper, Kentucky Opportunity Coalition was independent of the candidate it supported, Senate Minority Leader Mitch McConnell. But the group was run by a former McConnell aide and functioned effectively as an offshoot of McConnell’s campaign.

This pattern unfolded across the country, as outside spending ramped up. In all, outside groups pumped $554 million—$301 million from Republican-aligned shops, $225 million from Democratic allies—into 2014 races. And you guessed it: That, too, is a new record for a midterm election.

Koch and Rove: From zeroes to heroes.
Two years ago, the biggest donors and operatives in the Republican money universe—Karl Rove, casino magnate Sheldon Adelson, and the Koch brothers and their donor network—spent hundreds of millions of dollars to defeat President Obama and retake the Senate. They got nothing; it was an embarrassment.

This year, they won big.

Rove’s groups—American Crossroads, a super-PAC; and Crossroads GPS, its dark-money-funded sibling—spent heavily in 10 Senate races. The Republican won in at least six of those elections. If Republican Dan Sullivan defeats Sen. Mark Begich in Alaska (Sullivan was leading the vote count the day after the election) and GOP Rep. Bill Cassidy ousts Sen. Mary Landrieu in Louisiana’s runoff next month, Rove will end up 8 for 10. The Sunlight Foundation calculates Crossroads GPS’s return on investment—that is, the success rate of GPS’s spending to elect or defeat candidates—at an impressive 96 percent.

The Koch brothers’ flagship organization, Americans for Prosperity, had an equally stellar Election Day. At least five of the nine AFP-backed Senate candidates won. The Kochs’ Freedom Partners Action Fund recorded an 85 percent ROI, according to the Sunlight Foundation.

By contrast, Senate Majority PAC, the super-PAC aligned with Majority Leader Harry Reid (D-Nev.) that funded more ads than any other outside group, took a beating. It spent $47 million—the most of any super-PAC—but saw only two of the nine Republican candidates it targeted go down to defeat. Senate Majority PAC’s ROI: 9 percent.

The Democrats’ new George Soros had a bad night.
Tom Steyer, the billionaire investor turned environmental activist, put nearly $73 million of his money into electing candidates who believe in human-caused global warming and who want to do something about it. No single person gave more in 2014 than Steyer, according to CRP. He has become the big-money bogeyman of the right, but he fell short in multiple key races.

The bulk of Steyer’s money funded NextGen Climate, the organization he started to elect more climate-savvy politicians. NextGen’s super-PAC spent at least $20 million and defeated two of the four Republicans running for Senate it targeted. NextGen fared worse in governor’s races: Of the three GOP governors it sought to defeat—Florida’s Rick Scott, Maine’s Paul LePage, and Pennsylvania’s Tom Corbett—only Corbett went down to defeat. And he might have well done so without Steyer’s money in the race.

North Carolina: Our Senate race cost more than yours (and yours, and yours).
The campaign pitting incumbent Sen. Kay Hagan (D-N.C.) against Republican Thom Tillis officially cost more than $100 million. It was the most expensive Senate race in American history.

To better understand that figure, consider this statistic: In the final stretch of the race, the Center for Public Integrity reports, a Senate-themed ad ran on TV somewhere in North Carolina every 50 seconds.

Larry Lessig’s spend-big-money-to-fight-big-money plan flopped.
Larry Lessig, the Harvard law professor revered by the Reddit crowd, launched MayDay PAC to great fanfare in May with a plan to raise and spend millions of dollars to elect candidates who would, once in office, fight to get big money out of politics. “Embrace the irony,” Lessig likes to say.

But in the end, MayDay was more hype than action. It spent $7.5 million and of the eight “anti-corruption candidates” listed on its website, only two MayDay-backed candidates won. There’s little evidence to suggest that either of those candidates—Arizona Democrat Ruben Gallegos and North Carolina Republican Walter Jones—won due to MayDay’s intervention on their behalf.

Every Voice, another anti-super-PAC super-PAC, didn’t fare much better. Only four candidates supported by Every Voice won in the dozen races the group tried to influence.

Judicial elections keep attracting big bucks.
Nearly $14 million was spent on advertising in judicial races this year, an increase from 2010’s $12.2 million, according to Justice at Stake and the Brennan Center for Justice. But the money flowing into those races from business interests and anonymous outside groups seeking to toss out incumbent justices largely failed in Arkansas, Idaho, Illinois, Michigan, Montana, North Carolina, Ohio, Tennessee, and Texas.

The Republican State Leadership Committee, through its new Judicial Fairness Initiative, spent $3.4 million on TV advertising in judicial races in five states. The RSLC has sought to elect more pro-business judges across the country. This year, though, it failed to defeat seven judges it had targeted. Its only success was the reelection of Justice Lloyd Karmeier, who sits on the Illinois Supreme Court.