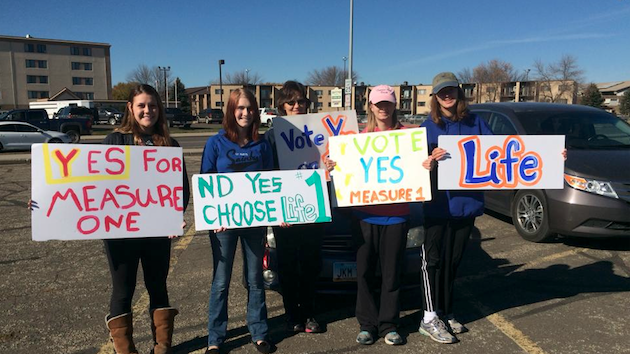 Update 11/04/14: North Dakota voters roundly rejected Measure 1. At the time of this update, 64 percent had voted against the constitutional amendment.

North Dakota is poised to become the first state in the country to recognize a fertilized egg as a person. At least, that’s what opponents say about a controversial ballot measure to amend state’s constitution. Supporters say that’s total bunk.

The proposal, known as Measure 1, would add a single sentence to the North Dakota constitution: “The inalienable right to life of every human being at any stage of development must be recognized and protected.” But the two camps fiercely disagree over whether this language makes Measure 1 a “personhood” amendment—the latest in a series of state proposals defining life as beginning at the moment of conception and giving legal rights to fertilized eggs.

If there was ever a year when that distinction mattered, it’s 2014. Democrats have slammed Joni Ernst, the Republican pick for Senate in Iowa, for supporting personhood. And they’ve hammered Corey Gardner, the Republican nominee for Senate in Colorado, for his past support of a personhood bill. Personhood amendments were developed with the intention of kicking off a legal fight that would eventually overturn Roe v. Wade. But they have failed all three times they have gone before voters—twice in Colorado, and once in Mississippi. Fans of Measure 1 fully recognize the term’s toxicity: ND Choose Life, the official ballot committee for supporters, released a memo arguing that Measure 1 “is not a personhood amendment.” And Christopher Dodson, director of the North Dakota Catholic Conference, says that Measure 1 opponents use the word “personhood” to describe the amendment “because they’re trying to portray it as extreme.”

To reproductive rights advocates and opponents of the amendment, that’s just semantics. “Part of the reason they may have changed some of the messaging is because they’ve been defeated in Colorado and Mississippi,” says Elizabeth Nash, the senior state issues associate at the Guttmacher Institute, a research group that supports abortion rights. “But the measure is very similar to the personhood amendments you saw in those states.”

The facts seem to back this up. Last year, as legislators debated whether to place Measure 1 on the ballot, North Dakota press and supporters of the bill universally referred to it as a “personhood amendment.” Republican state Sen. Margaret Sitte—who wrote the amendment using a Wikipedia article as her guide—didn’t object to the word “personhood” at the time. And a few days after the statehouse approved Measure 1, in March 2013, Sitte held a celebratory press conference with Personhood USA—the Colorado-based group responsible for kicking off the personhood movement—as well as with its local affiliate, Personhood North Dakota.

National anti-abortion rights groups hailed North Dakota for making history. “This is the first time in United States history that a legislative body has approved a personhood amendment in both the House and the Senate,” LifeSiteNews.com, a conservative anti-abortion website, proclaimed in a statement. “This amendment is intended to present a direct challenge to Roe v. Wade,” Sitte said of her bill to create Measure 1—echoing language used to describe other personhood measures.

Today, ND Choose Life uses the exact same office space that Personhood North Dakota occupied before that organization shut down in May 2013. (ND Choose Life did not reply to a request for comment.)

Mainstream anti-abortion advocates still aren’t clear on whether Measure 1 is a personhood amendment, either. A spokeswoman for Americans United for Life, the legal arm of the anti-abortion rights movement, declined to answer questions from Mother Jones about Measure 1 “as AUL does not handle personhood issues.” (The questions did not include the word “personhood.”)

But James Bopp, a conservative legal heavyweight who has derided personhood measures in the past, says that this ballot amendment is different. “This measure doesn’t confer personhood,” he tells Mother Jones. “It doesn’t make the unborn a person. It doesn’t confer rights on anybody.”

North Dakotans Against Measure 1 and ND Choose Life, the ballot committees that oppose and support the amendment, have raised $829,786 and $588,601 respectively. Planned Parenthood affiliates from across the country have contributed tens of thousands of dollars to the measure’s opponents.

If Measure 1 passes, it is scheduled to go into effect in December. Opponents argue that passing the amendment could undermine dying patients’ end-of-life instructions, poke holes in do-not-resuscitate orders, and make in vitro fertilization impossible. (Sitte disputes this. But she wrote an article in 2012 endorsing the idea that IVF is immoral. “Children are begotten, not made,” read title of her piece. “In IVF, children are created in a glass dish, not through an act of love.”) Supporters claim that passing the amendment would protect the status quo in North Dakota, but that failing to pass the amendment would make North Dakota—which has just one abortion clinic—”the most abortion-friendly state in the union.” In reality, it is very likely that Measure 1 will encounter a court challenge and that a judge will temporarily block the amendment before it goes into effect.

Nash says it’s not just a matter of what changes Measure 1 will or won’t make to the law. “It would be a real blow to women’s rights and psychological blow to reproductive health advocates, the idea that we would lose one of these personhood fights,” Nash says. “This is pretty extreme.”