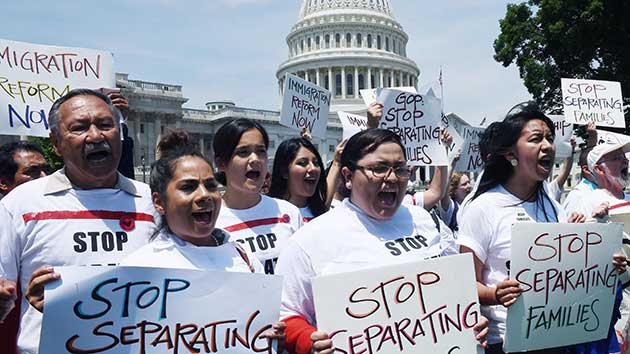 The details of President Barack Obama’s much-rumored, much-debated executive action on immigration have been leaked to the press, and the broad outline, according to Fox News and the New York Times, includes deportation relief for upward of 5 million people.

Republicans are already lining up to block the White House’s plans, and Obama’s successor could go ahead and reverse course in 2017, anyway. Still, here are three reported provisions that could have a dramatic impact on the lives of the United States’ 11 million undocumented immigrants:

1. Expansion of DACA, the program for DREAMers: Back in 2012, a Department of Homeland Security directive known as Deferred Action for Childhood Arrivals (DACA) extended deportation relief to those young immigrants who came to the United States before their 16th birthday and went on to graduate from high school or serve in the US military. As Vox‘s Dara Lind has reported, the program has been a success for the roughly 600,000 immigrants who received deferred action by June 2014, although just as many are eligible but haven’t yet applied. According to the Fox News report, Obama’s executive action would move the cutoff arrival date from June 2007 to January 1, 2010, and remove the age limit (31 as of June ’12); a new Migration Policy Institute (MPI) report details how changes to the initial plan could make hundreds of thousands of immigrants DACA-eligible: 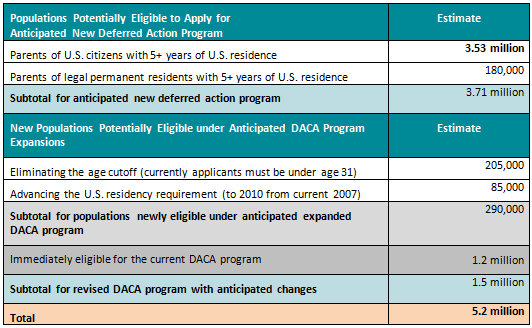 2. Relief for the undocumented parents of US citizen children: According to the Times, a key part of the executive action “will allow many parents of children who are American citizens or legal residents to obtain legal work documents and no longer worry about being discovered, separated from their families and sent away,” a move that would legalize anywhere from 2.5-3.3 million people. The Huffington Post reported in June that more than 72,000 parents of US-born children were deported in fiscal year 2013 alone; of those, nearly 11,000 had no criminal convictions. (One 2013 report estimated that 4.5 million US-born kids have at least one undocumented parent.)

3. Elimination of mandatory fingerprinting program: Under Secure Communities, or S-Comm, immigrants booked into local jails have their fingerprints run through a Homeland Security database to check their legal status. (If they’re unauthorized, they can be held by local authorities until the feds come pick them up.) The program, which began under President George W. Bush and was greatly expanded under Obama, has long come under fire for quickly pushing people toward detention and potential deportation, as well as for contributing to racial profiling and even the detention of thousands of US citizens. According to one 2013 report, S-Comm led to the deportation of more than 300,000 immigrants from fiscal years 2009 to 2013.

There are other reported parts to Obama’s plan, including hundreds of thousands of new tech visas and even pay raises for Immigration and Customs Enforcement (ICE) officers. Still, given this year’s border crisis, it’s notable that the president’s plan seems to make little to no mention of the folks who provoked it: the unaccompanied children and so-called “family units” (often mothers traveling with small kids) who came in huge numbers from Central America and claimed, in many cases, to be fleeing violence of some sort.

The administration has been particularly adamant about fast-tracking the deportation of those family unit apprehensions, whose numbers jumped from 14,855 in fiscal 2013 to 68,445 in fiscal 2014, a 361 percent increase. Meanwhile, ICE has renewed the controversial practice of family detention (a complaint has already been filed regarding sexual abuse in the new Karnes City, Texas, facility) and will soon open the largest immigration detention facility in the country, a 2,400-bed family center in Dilley, Texas—just as Obama starts rolling out what many immigration hardliners will no doubt attack as an unconstitutional amnesty.