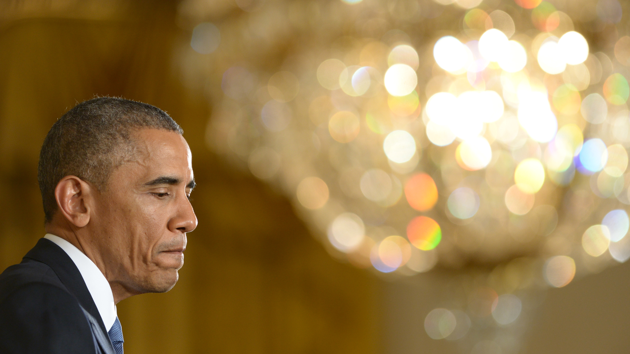 On Monday, President Barack Obama urged the Federal Communications Commission to safeguard net neutrality and not allow internet companies to give preference (for a fee) to certain types of online traffic. After much debate, the president was declaring his support for a free-flowing internet in which telecom firms do not block or slow traffic in order to pocket more profits or promote their own commercial (and perhaps even political) interests. But there could be a problem: FCC chairman Tom Wheeler, whom Obama appointed, is not yet on board.

After Obama’s announcement, Wheeler, according to the Washington Post, told industry insiders he preferred to allow some for-profit fast-tracking. That seemed to suggest the president may have a fight of his own making. Last year, Obama had the chance to nominate an outspoken consumer advocate to chair the FCC. But he picked Wheeler—whose views on the issue weren’t entirely clear—instead. After the Post‘s story was published, Huffington Post reported that Wheeler had not taken a hard-and-fast stance against the president, but was still figuring out what to do—and perhaps hoping to slow down the process.

So Wheeler is in the hot seat—but he also could pose an obstacle to the man who put him there. When Obama had to name a new chair of the FCC—which oversees radio, TV, satellite, and cable communications nationwide—and Wheeler emerged as a front-runner, many free internet groups expressed concern. These advocates worried that Wheeler, who had been a prominent lobbyist for telecom trade groups, was too close to industry and not likely to champion the interests of consumers. Obama favors strictly regulating the internet as a public utility (so preferential access cannot be bought and sold) and millions of Americans have sent letters to the FCC urging the commission to treat all internet content equally. But Wheeler has been leaning toward allowing internet companies to charge content providers like Netflix and Facebook extra for faster internet speeds—which could result in the creation of a tiered system for the internet. There’s no telling yet whether Wheeler will throw a wrench into Obama’s plan to preserve an equal-access-for-all internet.

It didn’t have to be this way. Several other candidates Obama was considering for the FCC post in 2013 were ardent net neutrality backers. There was Karen Kornbluh, who advocated for global open internet policies as Obama’s ambassador to the Organization for Economic Cooperation and Development. And there was Susan Crawford, a Cardozo Law School professor specializing in tech policy who favors net neutrality and has been called “the Elizabeth Warren of tech policy.”

“He’s beloved in the telecom industry.”

Mignon Clyburn, an FCC commissioner since 2009, was also floated as a potential nominee to chair the FCC. In 2010, she spoke on the importance of net neutrality for people of color, saying it was “essential…for traditionally underrepresented groups [that the FCC] maintain the low barriers to entry that our current open internet provides.” Another potential candidate, California Public Utilities Commissioner Cathy Sandoval—who worked in the Clinton-era FCC—also has a reputation for being consumer-minded.

Yet the president went with Wheeler—a major Obama donor and friend of the administration. At the time, Wheeler was the managing director at a venture capital firm. But he had previously spent 12 years as CEO of the Cellular Telecommunications & Internet Association, a telecom trade group, and before that served as president of the National Cable Television Association, a cable lobbying shop. “He’s beloved in the telecom industry,” a former Obama administration official told Mother Jones in March 2013. After securing the backing of a few public interest advocates—including Crawford—Wheeler sailed to confirmation in the Senate.

The decision on whether to keep the internet truly open is not Wheeler’s alone. Two other Democratic commissioners and two Republican commissioners sit on the FCC’s five-member panel and must vote to finalize new rules. But a public interest-minded FCC chair would make it easier for the agency to implement strong net neutrality regulations.

The basic issue is whether the FCC can regulate the internet as a public utility—say, like phone lines. If the commission claims this power, then it can adopt rules that maintain open and equal access to the internet. The two Republicans on the commission are likely to vote against any form of internet regulation. (They don’t accept the notion that the internet should be regulated by the FCC, whether as a public utility or under the more lax regulations Wheeler has been considering.) That means it’s up to Wheeler and his two fellow Dems to agree on an overall approach and specific rules governing the internet providers’ management of the information super-highway.

Wheeler’s industry-friendly stance makes that difficult. Democratic commissioners Clyburn and Jessica Rosenworcel have both expressed opposition to allowing internet companies to provide tiered service. Obama’s public push for net neutrality could help persuade Wheeler, Clyburn, and Rosenworcel to agree to regulate the internet as a public utility. But the president’s announcement could also backfire, stiffening the spines of Clyburn and Rosenworcel and making them less willing to compromise with Wheeler on allowing some form of paid prioritization of internet services. That could create a stalemate among the three Democrats, leaving the FCC without a rule specifically governing internet service. Internet service has been essentially unregulated since January—when a court struck down an earlier attempt by the FCC to implement net neutrality rules—leaving internet service providers free to demand extra money for faster content delivery. That happens to be a situation that Republicans on and off the commission do not find troubling.

Wheeler could choose to sidestep a fight with his fellow Democratic commissioners by allowing the GOP-controlled Congress, which will assume office in January, to make the net neutrality decision for him. Though Obama could veto any Republican-passed legislation aimed at gutting net neutrality, a Republican-dominated Congress could try to attach an amendment that partly defunds the FCC to a large must-pass bill. In other words, it could be a mess.

Wheeler could “run out the clock on this Congress,” explains Sascha Meinrath, the founder of the New America Foundation’s Open Technology Institute, then “wait until Republicans take over, and then claim that he cannot act due to pressure from Republican congressmen.” Which is not what one would expect from a commissioner appointed by the president. But if Wheeler does thwart Obama’s call for net neutrality, the president cannot say that he wasn’t warned.