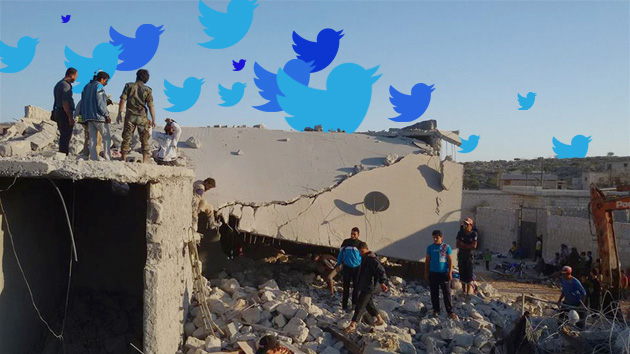 The village of Kfar Derian in Syria was hit by coalition air strikes.Photo Illustration by Jenna McLaughlin. Photo by Edlib News Network/AP

ISIS, the radical Islamist group that has seized large chunks of Iraq and Syria, has established a significant presence in the Twittersphere, using the microblogging platform to recruit, inspire, and terrorize. So has Twitter, the San Francisco-based tech company that collects large amounts of location and personal data on its users, teamed up with international governments to stop ISIS? Not really. Apparently, ISIS’s tweeters are not all violating Twitter’s rules.

This summer, media reports noted that  Twitter was suspending user accounts affiliated with ISIS. The Guardian reported that Twitter was “in duel” with ISIS and “closer than ever” with law enforcement agencies, mostly focusing on radical content coming from Syria and Iraq. Slate noted that Twitter practices a “systematic removal of terrorist content.” And Marie Harf, the spokesperson for the State Department, hinted in September on CNN that the government was collaborating with Twitter to keep an eye on ISIS: “We’ve talked to Twitter and YouTube and others about their own terms of service and making sure that ISIS’s videos or photos don’t violate those, because some of them, as you know, are quite gruesome.”

Some ISIS accounts were suspended, including accounts that issued death threats against Twitter employees. But Twitter has not launched an all-out crusade to eradicate ISIS from the Twitterverse.

Waging a (virtual) war against ISIS  is not on Twitter’s agenda. According to one Twitter company official, who asked not to be identified, the tech firm isn’t interested in defining terrorism or silencing political speech. “One man’s terrorist is another man’s freedom fighter,” this Twitter official says, pointing out that Twitter has long been a home for political dissidents and unpopular and extreme views. ISIS, however radical and violent, isn’t an exception. Twitter, this official insists, takes terrorism and violence seriously, but does not compromise on its terms.

Twitter has suspended many ISIS-affiliated accounts, maybe hundreds, according to the Twitter official. But a large number still exist. The State Department regularly engages with these accounts in English. A user called AbuTalhah002 tweeted on Thursday, “Luxury is an enemy of jihad.” The State Department replied via its anti-ISIS  “Think Again Turn Away” account: “Typical nonsense from extremist hypocrites—eat like kings among the starving, enjoy fanciest things…” The tweet included a photo of Abu Bakr al-Baghdadi, ISIS’s leader, wearing a fancy watch and a large dish of food.

Such countertweeting is an important part of the anti-ISIS campaign mounted by the State Department’s counterterrorism communications unit. Under this program, State Department tweeters search for ISIS messages online and respond with messages that often highlight ISIS’s violent atrocities.

It is not hard to find ISIS-supporting accounts on Twitter. A quick search turns up @MuhajiriShaam, a user whose profile photo prominently features a man in camouflage bearing a large gun. Many of the 200 plus accounts this user is following show ISIS-related images. One account features maps of ISIS-controlled territory; others post images of ISIS’s destruction or flashy advertisements for the Islamic State. On Twitter, it’s easy to find pro-ISIS tweets featuring fierce battle scenes, political cartoons, ISIS flags, women with grenade launchers, and images of American weaponry captioned, “Equip them so we can take it from them!” And if ISIS-touting Twitter accounts are removed for issuing direct threats or breaking specific Twitter rules, they often resurface under similar names. However, some of these accounts were suspended during the time this article was written—many of the accounts do ultimately issue violent threats.

According to Twitter’s few rules, users may not impersonate others, publish copyrighted material without consent, release private information about others, or issue specific violent threats. According to an official Twitter spokesperson, “We review all reported accounts against our rules, which prohibit unlawful use and violent threats.”

And Twitter has strict guidelines regarding what information it will hand over to law enforcement and government officials. In order to acquire personal account information, law enforcement must provide a subpoena or court order, including specific details about the account in question and an explanation of the relevance of this information to an investigation. If a police department wants to read private Twitter messages, it must obtain a search warrant. Twitter will almost always notify the user of a search conducted for a government entity, except in cases of emergency when a tip-off might increase the risk of harm or danger.

Overall, Twitter’s approach is hands-off. It is considerably smaller than other social-media companies, including Facebook. Facebook hires outside workers to review users’ newsfeeds for inflammatory types of content—”dick pics and beheadings,” says Wired. But Twitter does not hire such content cops.

Twitter has not come up with a comprehensive system for addressing terrorist messages and threats, partly because lists of terrorist groups can vary from one government to the next. (Just because a country declares an outfit a terrorist band, should Twitter ban it and its supporters? Maybe, maybe not. An authoritarian regime might designate an opposition group seeking democratic rule a terrorist threat.) So a Twitter user could post a profile picture of Baghdadi and change his handle to “Baghdadi_Rulez” and he wouldn’t get suspended—unless he issues a specific threat to hurt someone, or posts a link to copyrighted music being shared without permission. And Twitter only investigates possible user misconduct when another user notifies the company of a potential violation of the company’s rules.

In general, Twitter has tried to avoid releasing information to law enforcement or suspending accounts. For example, when the New York Police Department was chasing after unknown people who had mysteriously replaced US flags over the Brooklyn Bridge with white flags and a mock Twitter account took credit for the deed, the officers requested that Twitter hand over information related to that account’s user. When Twitter refused, the city and the company duked it out in court. The cops got the information, but Twitter won the right to tell the users—there were two people using that account—that their information had been requested. It turned out that these users were not the perpetrators, but rather two pranksters falsely claiming credit. Moreover, Twitter is not a part of PRISM, the shadowy NSA intelligence partnership with social media and online websites that other companies, including Facebook and Google, joined years ago. Several lawsuits have been filed against the NSA for its PRISM program, including one in February by Rand Paul and Freedom Works. The case is currently pending.

Twitter publicly discloses all removal and information requests from government agencies, at home and abroad, and posts them on the website Chilling Effects, a research and transparency database project of Harvard’s Berkman Center for Internet and Society and the Electronic Frontier Foundation.

Some foreign governments inundate Twitter with requests to remove content in accordance with their own country’s laws. In France, denying the Holocaust is illegal, and government officials have made requests to Twitter to have this type of content removed. An official Twitter statement from 2012 claims that “for historical or cultural reasons, [countries] restrict certain types of content, such as France or Germany, which ban pro-Nazi content.” But when content like this is blocked, it is only censored in the country where it is illegal. “We give ourselves the ability to reactively withhold content from users in a specific country—while keeping it available in the rest of the world,” the Twitter statement said. If a user in a country where Twitter has blocked information changes her profile settings to a different location—a simple flip of a switch—she can see all blocked content. No content is blocked in the United States in this fashion.

Requests from law enforcement agencies and governments for information from Twitter regarding  personal accounts have gone up almost 50 percent in the first half of this year, according to Twitter’s latest transparency report. (There’s no telling how much this increase has to do with ISIS, though some specific removal requests mention threats by terrorism.) Over 2,000 requests for information about users came from 54 different governments and law enforcement agencies—the bulk coming from the United States. Other governments on the list: Saudi Arabia, Turkey, and England. Of Saudi Arabia’s 189 account information requests, Twitter only honored 1 percent, or one or two accounts. And of Turkey’s 24, Twitter didn’t release anything.

So despite the earlier media reports, Twitter is not mounting a crusade against ISIS. Members and supporters of the Islamic State are free to hit Twitter to preach, recruit, and spread the ideas underlying the group’s terror. As long as it doesn’t make direct threats, impersonate people, or pirate music, ISIS can exploit Twitter—but those looking to defeat ISIS can use Twitter to watch and track people who would use modern-day technology to impose a barbaric regime rooted far in the past.