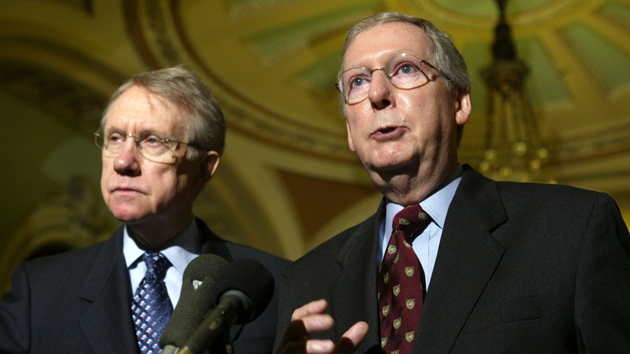 Senate Majority Leader Harry Reid (D-Nev.) is vowing to block any effort by his GOP counterpart, Mitch McConnell, to loosen the nation’s campaign finance limits as part of a bipartisan budget deal taking shape in Congress.

Last week, the Huffington Post reported that McConnell, who will take over as majority leader in January, wanted to slip into a major government funding bill a measure that would give presidential and congressional candidates more leeway to coordinate their campaign spending with political parties. Right now, candidates for federal office can coordinate some of their election spending with the parties—but only up to a certain amount. (The limit ranges from tens of thousands to several million dollars, depending on the size of the state’s voting-age population.) Beyond that threshold, parties and candidates can’t coordinate their spending plans, and the parties must spend their funds independently of the candidates they back.

The existing rule is intended to prevent donors from using political parties to skirt legal limits on donations to candidates. As it stands, donors can give up to $5,200 every two-year election cycle to each candidate for federal office. But McConnell’s measure, if enacted, would create a massive loophole in that rule, says Fred Wertheimer of Democracy 21, a group that supports limits on money in politics. If McConnell gets what he wants, rich donors who hit the $5,200 limit could simply route further donations to candidates by giving to political party committees—which may accept far larger donations and could work directly with the candidates to ensure the money was spent as the donors intended. “The practical effort here is to repeal the limits,” Wertheimer says.

McConnell has a broader plan here. Politico recently noted that McConnell is seeking to direct more big money to political parties, as opposed to outside groups such as super-PACs that in theory must remain independent of candidates. In a subsequent interview with Roll Call, McConnell suggested he might not force the issue, saying his proposal is “not on the agenda” but that the coordination limit he wants to eliminate is “an absurdity in the current law.”

That doesn’t mean the plan is dead. Should McConnell reverse course and attach this change to the budget bill, Reid’s office says the majority leader will block such a maneuver. “Reid strongly opposes and will fight against any efforts to include the McConnell [measure],” an aide in Reid’s tells Mother Jones.

House and Senate members hashing out the budget bill were expected to release a version of the legislation as early as Monday evening.