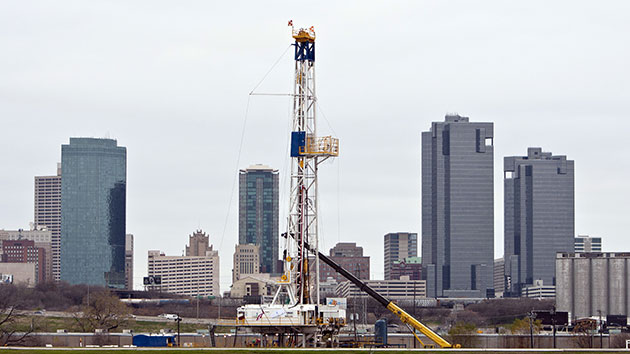 President Obama is fond of touting America’s vast trove of natural gas—and the energy (read: economic growth) it can provide—as a reason to support fracking. “Our 100-year supply of natural gas is a big factor in drawing jobs back to our shores,” he told a gathering at Northwestern University in October.

You can hear that same optimism about US natural gas production from Democrats, Republicans, and of course, the industry itself. The conviction that America can fuel its economy by churning out massive amounts of natural gas for decades has become a core assumption of national energy policy. But what if it’s wrong?

Those rosy predictions are based on official forecasts produced by the Energy Information Administration, an independent federal agency that compiles data on America’s energy supply and demand. This spring, EIA chief Adam Sieminski told a Senate hearing that he was confident natural gas production would grow 56 percent between 2012 and 2040. But the results of a series of studies at the University of Texas, reported today in an article in the journal Nature, cast serious doubt about the accuracy of EIA’s forecasts.

The UT team conducted its own analysis of natural gas production at all four of the US’s major shale gas formations (the Marcellus, Haynesville, Fayetteville, and Barnett), which together account for two-thirds of America’s natural gas output. Then, they extrapolated production into the future based on predicted market forces (the future price of gas relative to other fuels) and known geology. Their analysis suggests that gas production will peak in 2020, 20 years earlier than the EIA predicts. What’s more, the UT researchers project that by 2030, gas production levels will be only half of EIA’s prediction.

The difference in opinion stems from a difference in the scale of the analyses. The UT team’s grid for each shale play studied was at least 20 times finer than EIA’s, according to Nature:

Resolution matters because each play has sweet spots that yield a lot of gas, and large areas where wells are less productive. Companies try to target the sweet spots first, so wells drilled in the future may be less productive than current ones. The EIA’s model so far has assumed that future wells will be at least as productive as past wells in the same county. But this approach, [UT-Austin petroleum engineer Ted] Patzek argues, “leads to results that are way too optimistic”.

Why do these numbers matter? The federal government, states, and the private sector all base their energy investments—research and development, infrastructure construction, etc.—on forecasts of where our energy will come from in the future. If natural gas really is super-abundant, there may be less urgency to invest in renewables like solar and wind to replace coal plants as they age or are regulated out of existence. But if there’s less recoverable natural gas than we think, we’ll need to change our strategy to avoid coming up short on power 20 years down the line. At the same time, there are international repercussions: Many countries are taking cues from the United States on how to develop their own natural gas resources, so what happens here will shape those plans as well. And a series of massive natural gas export facilities are already being proposed across the US to ship our gas overseas; what will happen to global markets if those run dry prematurely?

Because they rely on informed guesses about future market conditions, these forecasts can never be bulletproof, and the UT study doesn’t close the book on how much natural gas the US really has in store. But it’s an important reminder that we should treat politicians’ promises about fossil fuel wealth with skepticism.