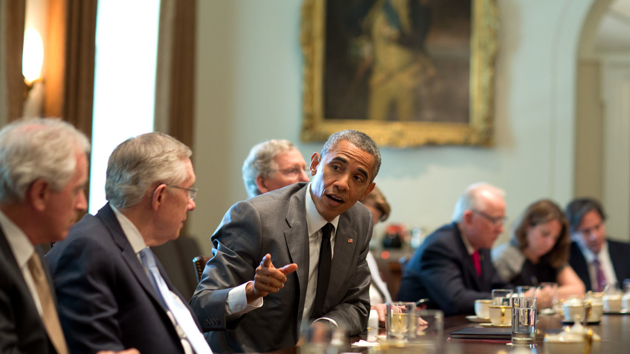 Barack Obama hasn’t needed to wield his veto pen very often during the first six years of his presidency. With Democrats holding a majority in the Senate for that entire time, then-Majority Leader Harry Reid could hold up any bills that weren’t favored by Obama. So far, the president has expressly vetoed just two bills, the lowest number since Abraham Lincoln if you ignore James Garfield’s brief six-month stay in office. (Lincoln outright vetoed only two bills, but used the pocket veto several times, a tool Obama has not yet employed.)

That will soon change now that Republicans control majorities in both the House and Senate. If Republicans get their act together and pass a budget resolution sometime this year, they could move legislation on issues like tax reform through the Senate without worrying about picking up any Democratic votes. But it will be tough to pass an overarching budget bill for the entire government through the House given the fractious divides between John Boehner and the tea partiers in his caucus.

Instead, if Republicans want to get conservative legislation onto Obama’s desk, they’ll need to convince the moderate Democrats in the Senate to join their 54-seat majority and thwart any filibusters waged by other Democrats. For most issues, that’s a no-go. Republicans aren’t going to find any Democrats willing to sign on to a complete repeal of the Affordable Care Act. A few Democrats objected to Obama’s November executive action on immigration, though considering that the full caucus voted for immigration reform last year, it seems unlikely that enough Dems would break if it were put to a vote. But there are a host of policy issues on the margins that moderate Democrats have expressed support for in the past and that might be able to squeak through with their help. Those pieces of legislation would force Obama to finally rebuke Congress with more vetoes—revealing rifts amidst his own party and, if Republicans can muster two-thirds majorities in both chambers necessary to override the veto, possibly putting laws into effect without Obama’s approval.

Here’s a brief breakdown of where Obama might disagree with congressional majorities over the next two years:

Keystone XL: This should be the first bill from the new session of Congress that Obama has to veto. The House passed a measure earlier this month that would have approved construction on the pipeline to transport oil from the tar sands in Canada down to oil refineries in Texas and Illinois. Last week, the Senate cleared the first procedural vote, with 11 members of the Democratic caucus siding with Republicans in support of the measure. The bill could win final approval this week, but the Obama administration has already promised to veto the measure. Based on the initial round of voting, it doesn’t look as if there is a large enough supermajority to override an Obama veto.

Affordable Care Act: While repealing all of Obamacare isn’t going to happen while the law’s namesake president remains in the Oval Office, there’s a good chance that Republicans will try to put pressure on the president to tweak various aspects of the bill with the help of moderate Dems. The second bill that Obama might have to veto is a change to the law’s employer mandate. Republicans want to shift the definition of full-time employee from someone who works 30 hours per week to someone who works 40 hours per week, a correction that would deprive 1.5 million people of their health insurance (Obama has  already guaranteed that this bill wouldn’t get his signature).

Republicans could also find unlikely allies when they try to repeal the ACA’s medical device tax, which has developed an unusual opposition coalition based more on regional interests than normal ideological markers. Typical liberal heroes like Sens. Al Franken, Elizabeth Warren, and Patty Murray have endorsed ditching the ACA’s 2.3 percent surcharge on medical device sales thanks to strong home state industries. Given the cross-ideological lines of support, Congress might be able to muster together enough votes to override an Obama veto should the president choose to oppose such a bill.

Financial regulation: A fight has erupted between the dwindling rank of business-friendly Democrats and the rising progressive wing that wants to rein in Wall Street. In December, Warren waged a doomed battle to derail a bill to keep funding the government that included a provision rolling back rules barring the banks from certain forms of risky trading. Democrats felt forced to sign on to that poison pill provision to keep the federal government up and running.

But there have been hints that moderate Democrats will fold whenever the GOP subtly tries to erode Dodd-Frank, the Democrat’s 2010 law to fix Wall Street. At the start of the new session of Congress, the Senate renewed the Terrorism Risk Insurance Program, a generally bipartisan piece of legislation, but Republicans slipped in an extraneous measure to change derivatives rules for nonbanks. Warren offered an amendment to strip that language, which Republicans and 13 Democrats shot down. The Democrats who voted to ease the financial rule were: Michael Bennet (Colo.), Tom Carper (Del.), Bob Casey (Pa.), Joe Donnelly (Ind.), Martin Heinrich (N.M.), Heidi Heitkamp (N.D.), Angus King (a Maine independent who caucuses with Democrats), Amy Klobuchar (Minn.), Joe Manchin (W.Va.), Claire McCaskill (Mo.), Gary Peters (Mich.), Debbie Stabenow (Mich.), and Jon Tester (Mont.). It’s a gang to which Republicans will likely often turn as they try to weaken the rules on the banks.

In this instance the White House had said it objected to using the terrorism insurance bill “as a vehicle to add entirely unrelated financial regulatory provisions,” but in the end these provisions weren’t enough to justify a veto; Obama signed the bill on Monday.

Last Wednesday, the House passed a blanket package to revoke Wall Street reforms—with 29 House Dems voting for the proposal. It’s unclear if that same cohort of moderate Democrats in the Senate would be willing to vote for a bill that is expressly aiding only the financial industry (and something Obama would certainly veto), but they could likely be won over if these ideas are split up and attached to popular bills like terrorism insurance. Whether Obama would be willing to veto a broader bill he largely supports over unpleasant side measures remains to be seen.

Regulatory reform: By far the least sexy of the topics that might be forced on Obama, changes to how the government writes its rules could pose the biggest trouble for the president. Unlike finance, environmental rules, or health care reform, it’s an obscure topic unlikely to garner an outpouring of public outcry. These are changes portrayed as making government more sensible and business-friendly, always a favorite image to project by moderate Democrats who still cling to Bill Clinton’s mantra of deconstructing Big Government, yet they could stymie efforts to write rules for those specific policy areas.

Changes to how the government writes rules “seem both kind of technical and innocent, because they talk about things like cost-benefit analysis, or increasing judicial review, or more economic requirements to help small business” says Lisa Gilbert, director of Public Citizen’s Congress Watch. “Things that don’t sound threatening and maybe even ease tensions with constituents who don’t really like the idea of red tape and have this idea that if we change it at the federal level lots would be easier at home.” But in essence, these rules just offer cover for big business to delay the laws that they don’t want to comply with—continuing to set their own rules and skating by for years after the public thinks they’ve already been kept in check.

Last week, the House passed the Regulatory Accountability Act, a bill that would force all agencies to conduct a cost-benefit analysis for each rule. This process tends to favor business interests over consumers. The bill would also make it easier for judges to toss aside rules and force agencies to hold lengthy public hearings for each rule they consider. Past iterations of this bill have received support from Senate moderates like Florida’s Bill Nelson, Maine’s King, and West Virginia’s Manchin.

That group of 10 to 15 Democrats willing to break from the rest of the party aren’t hiding their plans. “If Republicans want a minimum of six or more Democrats to work with them,” Manchin said earlier this month, “and they’re sincere about policy and good policy moving forward, they’re definitely going to reach out, and I’ve reached out to them.”